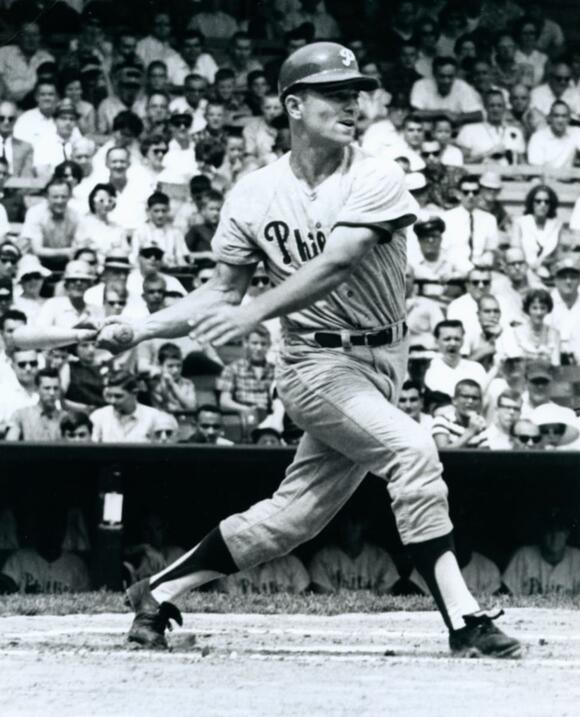 Johnny Callison was born in March 1939 in Qualls, Oklahoma. He grew up there, but eventually moved to Bakersfield, California where he spent his high school years. He was a premier high school athlete and quickly got a lot of major league attention from scouts. He was signed straight out of high school and joined the Chicago White Sox in 1957 at the age of 18.

Callison made his big league debut in 1958 but only played in 18 games. He played 49 games with the White Sox in 1959, and despite the hype surrounding Callison’s future, the White Sox traded him to the Phillies that offseason for Gene Freese in hopes of competing with the New York Yankees for the AL Pennant.

The White Sox went on to lose the Pennant race to the Yankees, and Callison played in 99 games for the 59-win, last-place Phillies that year.

It took a couple years in the majors for Callison to adjust and perform to standards, but as a lefty hitter, he worked on slapping the ball down the left field line, and laying down bunts to catch infielders off-guard. Before long he perfected his strategies at the plate and it started paying off in 1962.

That year, Callison batted .300 for the first and only time of his career. He hit 23 homers, drove in 88 runs, and led the league with 10 triples. It was this season that Callison officially became the everyday right fielder for Philadelphia.

Let’s take a look at some of Callison’s greatest career achievements:

In 1966, Callison’s power numbers began to take a noticeable dip. He did, however, lead the league with 40 doubles, but had his worst slugging percentage since 1959 with the White Sox. A series of lingering injuries, as well as a loss of confidence, brought Callison from an All-Star-caliber player to an average one.

He spent a few more seasons in Philadelphia, but in 1970, he joined the Chicago Cubs via trade. A couple years later, he went to New York and would retire as a Yankee in 1973.

It may not have been a fairytale ending to an otherwise solid career for Callison, but in the early to mid 60s, he was a fan favorite in Philadelphia. At his peak he was a true five-tool player and always dazzled the crowd. That is why he earned his plaque on the Phillies Wall of Fame, where the right fielder will forever be celebrated for his greatness.

The Chicago White Sox announced the signings of international outfielders Oscar Colás ($2.7 million) and Erick Hernández ($1 million) on Tuesday. Both players are ranked in the top 30 international prospects according to MLB Pipeline, with Colás No. 5 and Hernández No. 28. “We feel very good with what we were able to accomplish this year,” said Marco Paddy, White Sox special assistant to the ...
MLB・1 DAY AGO
USA TODAY

Alex Rodriguez, a three-time MVP whose 696 home runs trail only Barry Bonds, Hank Aaron and Babe Ruth, received just 34.3% of the votes in his debut.
MLB・1 DAY AGO
Inside The Dodgers

Roger Clemens, the seven-time Cy Young winner, is in his final year of eligibility on the Hall of Fame ballot.
MLB・2 DAYS AGO

BOSTON (CBS) — David Ortiz got a very important phone call on Tuesday night, letting him know that he is now a Baseball Hall of Famer. Big Papi was pretty pumped to receive that call. Ortiz was in the Dominican Republic surrounded by family and friends — including former Boston teammate and fellow Hall of Famer Pedro Martinez — when he received the news from Jack O’Connell of the BBWAA. “I’m calling you from Cooperstown, New York to let you know that the baseball writers have elected you to the National Baseball Hall of Fame,” O’Connell told Ortiz. With that, Ortiz threw his...
MLB・1 DAY AGO
Audacy

MLB Network’s Rob Parker did not vote for David Ortiz citing a gray area with PEDs, but he voted for Barry Bonds, Roger Clemens and Sammy Sosa, leading to one of his colleagues to call him out.
MLB・1 DAY AGO
Audacy

Should MLB players from the steroid-era be allowed into the Hall of Fame? Jay Crawford says it does a disservice to the sport to ignore them. Hear why with Baskin and Phelps!
MLB・1 DAY AGO

BOSTON (CBS) — It wouldn’t be Hall of Fame season if a member of the baseball media wasn’t twisting himself into a pretzel for all the world to see. Enter Jack Curry of the Yankees’ broadcast network. Curry revealed his ballot on Tuesday, which is the day that the Baseball Hall of Fame will announce which players — if any — will earn enshrinement this year. Curry used eight of his allowable 10 votes this year, and for the first time in their 10 years of eligibility, Barry Bonds and Roger Clemens received his vote. The reason Curry hadn’t voted for Bonds and...
MLB・1 DAY AGO
Inside The Dodgers

The 2021 season was one heck of a roller coaster for Max Muncy. The slugging first baseman carried the Dodgers in the first half with his bat, which resulted in him being in early MVP conversations.  But that first half was short-lived as Muncy came tumbling back to earth in the second half, ...
MLB・12 HOURS AGO
Sportsnaut

From a pure on-field standpoint, Barry Bonds is considered the most-feared hitter in the modern history of Major League Baseball.
MLB・1 DAY AGO
99.5 / 102.7 THE BOX

Willie Mays has repeatedly called for Barry Bonds' induction into the baseball Hall of Fame. Now, the home run king is effectively shut out from inclusion in what many consider to be baseball's greatest honor.
MLB・18 HOURS AGO

PHILADELPHIA (CBS) — A couple of Phillies greats will find out Tuesday night if they’ll get the call from the Baseball Hall of Fame. World Series Champions Jimmy Rollins and Ryan Howard are on the ballot for the first time. They need at least 75% of the votes in order to be immortalized forever in Cooperstown. The voting results will be announced at 6 p.m. on Tuesday.
MLB・1 DAY AGO
WEEI Sports Radio

David Ortiz was voted into the Baseball Hall of Fame Tuesday, while Barry Bonds and Roger Clemens were shut out. That’s total insanity. They should all be in.
MLB・17 HOURS AGO
WFAN Sports Radio

Shortly after he was officially denied entry to the Baseball Hall of Fame on his tenth and final try, Roger Clemens issued a statement on Twitter verifying that he’s fine without the honor.
MLB・1 DAY AGO
The Blade

Jim Leyland has never been one to mince words or withhold opinions, and the Perrysburg native and former big league manager on Wednesday was predictably critical of the decision to keep Barry Bonds out of the National Baseball Hall of Fame.
MLB・11 HOURS AGO

Will the Atlanta Braves be able to sign Freddie Freeman? Will Major League Baseball play 162 games this year? What is the big hold up in the MLB negotiations?
MLB・1 DAY AGO
Denver7 News KMGH

Todd Helton continued his climb toward immortality on Tuesday, inching closer to reaching the Hall of Fame.
MLB・1 DAY AGO
Sportico

Barry Bonds, Roger Clemens, Todd Helton, David Ortiz, Andy Pettitte, Manny Ramirez, Alex Rodriguez, Scott Rolen, Curt Schilling, Sammy Sosa — My ballot for the National Baseball Hall of Fame Class of 2022. The Hall of Fame is now right where it wanted to be in 2014, when it changed the eligibility for players on the writer’s ballot from 15 years to 10. Barry Bonds, Roger Clemens and Sammy Sosa, stars of Major League Baseball’s so-called steroid era, are now off the Baseball Writers of America Association ballot five years before they otherwise would have been. For the 10th consecutive year, the...
MLB・1 DAY AGO
USA TODAY

Major League Baseball and the players union continued to make slow, incremental progress Tuesday, but they are still a long way from an agreement.
MLB・1 DAY AGO