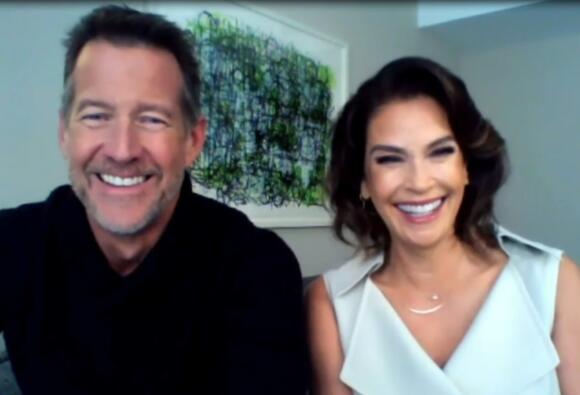 Teri Hatcher and James Denton said it was great to work with each other again in their new movie “A Kiss Before Christmas.” They said they still share a lot chemistry and it is a wonderful Christmas story.

“A Kiss Before Christmas” premieres at 8 p.m. on Sunday on Hallmark channel.

Authorities are searching for a man who dropped off human remains at the San Bernardino Police station on Thursday. The man was seen entering the station and approaching a public counter where he placed what initially appeared to be animal remains and a human jawbone, police said. He then left the station before officers could […]
SAN BERNARDINO, CA・4 DAYS AGO
KTLA

A former California Highway Patrol officer was sentenced to jail on Thursday for shooting his neighbor in 2017. The officer, Trever Dalton, 50, is facing one year in jail and 36 months of formal probation, according to the Ventura County District Attorney’s Office. Dalton was an off-duty CHP officer when he got into a dispute […]
VENTURA COUNTY, CA・3 DAYS AGO
KTLA

Two gang members were arrested early Friday, one after a gunbattle, in the January massacre of six people including a baby at a central California home associated with a rival gang, the Tulare County sheriff said. Sheriff Mike Boudreaux said Noah David Beard, 25, was taken into custody and Angel “Nanu” Uriarte, 35, was wounded […]
TULARE COUNTY, CA・3 DAYS AGO
OK! Magazine

Awkward! Beyoncé won her 31st Grammy award for Best R&B song — but the singer couldn't make it on stage as she was stuck in traffic, according to host Trevor Noah. Luckily, Nile Rodgers and The-Dream came to the rescue and accepted the trophy. "Y'all know n****s be on CP time," the latter said. "Beyoncé thanks y'all.""When I got called to play on this song, it was the most organic thing that every happened to me. I heard the song and I said, 'I want to play on that right now.' It was one take. I promise. I played it....
1 DAY AGO
DoYouRemember?

The 2023 Grammys kicked off on Sunday, February 5, starring musical artists celebrating musical artists. Several very recognizable names saw their work honored, including Ozzy Osbourne, who took whom two awards that night. But viewers found themselves distracted by Madonna‘s face when the “Like a Prayer” singer took the stage for a special introduction.
LOS ANGELES, CA・13 HOURS AGO
musictimes.com

Madonna graced the 2023 Grammy Awards stage on Sunday to present another singer's performance. However, she quickly shared a speech to the crowd and those watching from home. The "Material Girl" singer told everybody, "I'm here to give thanks to all the rebels out there, forging a new path and taking the heat for all of it."
12 HOURS AGO
KTLA

A motorist captured video Thursday afternoon of what appeared to be a Tesla driver asleep behind the wheel while in traffic on a Southern California freeway.   It came as a shock to Kiki Dolas and her partner who spotted the driver around 4 p.m. on the 15 Freeway near Temecula.   The couple was […]
TEMECULA, CA・3 DAYS AGO
KTLA

Reid Scott was cast in the hit HBO series “Veep” back in 2012 and it has been a fan favorite ever since. Scott told KTLA 5’s Sam Rubin that he would totally be down to do a reboot if it ever came up, but sadly it has not as of recently. The actor did relay, […]
3 DAYS AGO
KTLA

The members of the platinum-selling country group James Barker Band joined us live with a special performance of their new single, “Meet Your Mama.” The award-winning stars shared details on their music journey and what it was like working on their hit song, “New Old Trucks,” with Dierks Bentley. Stay up to beat with the […]
3 DAYS AGO
KTLA

Actress Melinda Dillon, of ‘A Christmas Story,’ dies at 83

Actress Melinda Dillon, known for roles in films like "Close Encounters of the Third Kind" and "A Christmas Story," died Jan. 9 at the age of 83, her family confirmed in an obituary.
LOS ANGELES, CA・3 DAYS AGO
KTLA

Not every artist can win a Grammy, but that doesn’t mean they go home empty-handed. They sometimes score big when grabbing a gift bag from the ceremony. Lash Fary from Distinctive Assets gave KTLA 5’s Sam Rubin a peek inside the official Grammy gift lounge. The first item showcased was the ReFa Fine Bubbles Showerhead, […]
9 HOURS AGO
KTLA

The owner and operator of a retail shop in Ventura County that sold California Fish and Wildlife hunting tags has pleaded guilty to federal charges in connection with a large-scale poaching ring. Juventino Reyes Guerrero, 44, the operator of a Fish and Wildlife licensing desk located within Lizette’s Market in Piru, pleaded guilty to six […]
VENTURA COUNTY, CA・4 DAYS AGO
KTLA

A 39-year-old convicted felon was arrested Thursday after allegedly punching three female athletes during a girls’ basketball game in Corona and threatening students with a gun, police said. The incident was reported around 8:35 p.m. Jan. 24 after a fight broke out during a basketball game at Centennial High School against Santiago High School. Witnesses […]
CORONA, CA・2 DAYS AGO
KTLA

Parents are calling for action after video captured the brutal beating of a teen at a high school in Jurupa Valley.   The video shows a group of teens hitting and kicking another boy as he’s curled up on the ground.   “They’re stomping on his head, my son is on the floor in a […]
JURUPA VALLEY, CA・2 HOURS AGO
KTLA

8 tax deductions, credits you may qualify for in 2023

If you haven't filed your taxes yet, that means you still have time to take advantage of some commonly overlooked credits and deductions.
2 DAYS AGO
KTLA

What are those little black dots on your car windows?

Those little black dots and the black rims that surround them on car windshields are there for a reason, and happen to serve an important purpose.
2 DAYS AGO
KTLA

Knott’s Berry Farm has suspended its Saturday night chaperone policy, the theme park announced Friday. “Knott’s Berry Farm’s chaperone policy will no longer be in effect on Saturdays. We are always evaluating our safety policies and will continue to make modifications based on the needs and behaviors we see in the park. Safety is and […]
3 DAYS AGO
KTLA

James Maslow is booked and busy. Not only is he back on tour with the pop group Big Time Rush, but he’s also starring in a new movie. When it comes to getting the band back together, Maslow said it was inevitable. “We always knew that we wanted to get back together at some point. […]
ALABAMA STATE・3 DAYS AGO
KTLA

Woman set on fire in Riverside County, suspect at large

Police are searching for a man who allegedly set a woman on fire in Riverside County on Friday. The suspect, Nicholas Norman, 38, from Beaumont, is wanted for attempted murder, according to the Beaumont Police Department. Officers were contacted by a woman who said her friend had been doused with lighter fluid and set on […]
RIVERSIDE COUNTY, CA・2 DAYS AGO