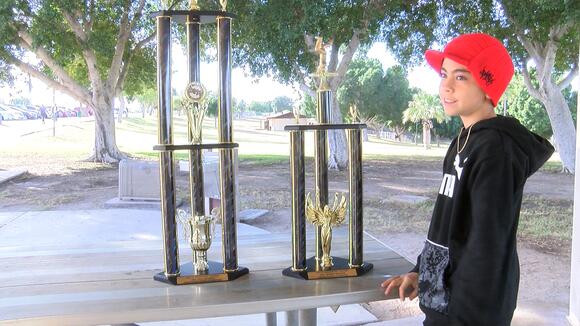 Breakdancing went from underground battles in garages and at parks to actual leagues and is even heading to the 2024 Paris Olympics. Breaking, jamming, and battling… words you definitely want to hear as a breakdancer.

When it comes to breakdancing, a 10-year-old Yuma local has followed in his father’s footsteps, literally.

"When I was like at least 5, I like, whenever I heard music from the garage I, I would just go in there and start breaking with my dad. Throwdown some moves," says breakdancer Ivan Garcia.

Ivan most recently won the Fresh Steps Championship and the Battle Rockers Championship-- all from being taught by his dad, a long-time breakdancer himself.

"We’re the only ones from Yuma that showed up so, I kinda passed on the torch to him and said he wanted to try the tournament so we took it serious and trained for it and he was able to come back with a couple wins," explains Ivan's father Ruben Garcia.

But not without Ivan's biggest fan.

"The lights and the people watching and the pressure, I mean that’s a lot and he’s only 10. So it’s just really heart-warming and just, I wanna just explode inside when I see how happy he is, regardless… win or lose," says Ivan's mother Sunny Garcia.

Ivan has competed over a dozen times within two years and has no plans on stopping. Every February, the Garcia family is involved in the Yuma Love Hip-Hop Fest where others can enjoy music and battle.

For Ivan, it’s all about dad.

"It would always be interesting to me to watch and I’ve always wanted to do what he would do," explains I van Garcia.

If anyone is interested in learning more about breaking, the father-son duo welcomes the community to join the fun and contact them @drago_rock .

Every year the Yuma Coalition to End Homelessness conducts a survey to see how many locals are currently living on the streets. The post YCEH offering free training sessions for volunteers to help with the yearly PIT survey appeared first on KYMA.
YUMA, AZ・1 DAY AGO
KYMA News 11

Those who lose a loved one all have different ways of coping. For one Yuma artist, he’s dealt with his loss by sharing his talents with others who are also dealing with the same suffering. The post Local artist paints portraits for those who have lost loved ones to COVID-19 appeared first on KYMA.
YUMA, AZ・4 DAYS AGO
KYMA News 11

The city of Yuma is working to rebuild Kennedy skatepark and today the latest design will be unveiled to the city council. The post Parks and Recreation will be presenting local skatepark design to the City Council appeared first on KYMA.
YUMA, AZ・8 DAYS AGO
KYMA News 11

If you have the day off Monday for Martin Luther King Jr. Day and are looking for something fun to do in Yuma to honor MLK, there is a parade around the city. The post MLK parade march in Yuma appeared first on KYMA.
YUMA, AZ・10 DAYS AGO

Local shoppers react to Bed, Bath, And Beyond store closing

Bed Bath and Beyond in Yuma will be closing its doors soon. Local customers will eventually have to look elsewhere for their home items. The post Local shoppers react to Bed, Bath, And Beyond store closing appeared first on KYMA.
YUMA, AZ・8 DAYS AGO
KYMA News 11

The local art community welcomed back one of it’s favorite events on Saturday. Art in the Park made it’s return to Gateway Park. Festivities kicked off around 10:00 a.m. The post Art in the Park held for first time since COVID-19 pandemic appeared first on KYMA.
YUMA, AZ・12 DAYS AGO
KYMA News 11

The U.S. Army is now offering a max bonus of $50,000 for anyone who enlists, because of recruitment issues. The post Army to raise maximum enlistment bonus appeared first on KYMA.
YUMA, AZ・15 DAYS AGO
KYMA News 11

Quilting dates back centuries, and is considered to be more than just a trade. The act brings together imagination and talent and creates art. The post It’s a centuries-old art form that is still leaving people in stitches appeared first on KYMA.
YUMA, AZ・21 DAYS AGO
KYMA News 11

In the aftermath of the holiday season, many are trying to get tested for COVID due to being around someone who later tested positive or because they are feeling sick themselves. The post COVID testing challenges after holiday season appeared first on KYMA.
YUMA, AZ・23 DAYS AGO