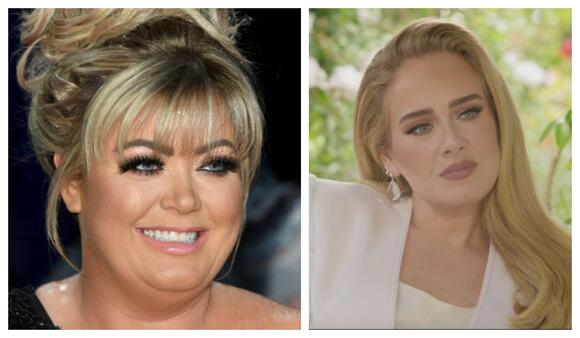 Speaking on the Gemma Collins Podcast, the TV star talked about the singer’s exercise regime which involves weight lifting and hiking and said she would love to join in one day.

“Adele, I’m your girl, if you want some company on your exercising please take me with you,” she said.

“I’ve walked up the Runyon Canyon.”

It comes amid rising anticipation for the singer’s new album which will be released on Friday. People are already enjoying tracks and concerts from the singer and it is set to be a commercial success.

Collins also criticised people who slammed Adele’s regime for being potentially excessive and said it was up to her to what she wants.

“None of us should judge.

“Adele looks amazing, as long as she’s happy, what Adele does with her fitness regime is up to her.”

Meanwhile she also said she want to help her manage her workload, after it was reported the singer has turned to Celine Dion for advice.

“Adele is one person I would wait on definitely. I love her. I’ll make you green teas, I’ll do whatever you want me to do, Adele, I’ll entertain you, you don’t need Celine Dion for this. Give me a call.”

She also said she was “gutted” she wasn’t in Adele’s new album “doing a duet with her”.

“I hope I get to meet you one day, that would be my dream,” she said.

In their Variety's Actor On Actor interview, Lady Gaga opened up to Jake Gyllenhaal about acting being an "escape."
CELEBRITIES・1 DAY AGO
goodhousekeeping.com

Kate Hudson, 42, Shows Off Her Seriously Epic and Super-Toned Abs on Instagram

Kate Hudson declared that 2022 will be the year that she will reunite with her "dancing heart again." And I am so here for it. The 42-year-old Knives Out 2 star just shared two posts from her dance workout. In the first, she posted a series of snaps, all of which feature her in different dance positions while wearing a super cute all-black workout set. In the second, she posted a video of herself really feeling the music, dancing to Sleeping at Last's tune "All Through the Night." Her killer moves were inspired by modern dance, and she does some seriously impressive spins and twirls.
CELEBRITIES・1 DAY AGO

When Adele announced that she had to postpone the start of her Las Vegas residency, I have to admit, I broke down in tears. It’s so different to see that side of a celebrity. But also seeing how it gutted Adele broke my heart. “I’m so sorry, but my...
CELEBRITIES・5 DAYS AGO
Indy100

Viral sensation Jackie Weaver will be demonstrating her knowledge of The Chronicles Of Riddick film franchise, which stars Vin Diesel, when she appears on Celebrity Mastermind next month. Weaver shot to fame last year for the way she handled a chaotic parish council meeting, in which participants were seen losing...
CELEBRITIES・1 DAY AGO
Indy100

An Adele fan has proven she has the worst luck when it comes to watching the 15-time Grammy Award winner perform live after she revealed she has attempted to go and see the 'Easy On Me' singer live three times - and failed miserably on each occasion. Yesterday (January, 21)...
CELEBRITIES・6 DAYS AGO
spectrumnews1.com

LOS ANGELES (CNS) — Actress Kathryn Kates, who appeared in episodes of “Seinfeld” and “The Many Saints of Newark,” has died. She was 73. Kates died of cancer on Saturday, her agent, Ben Jordan, told USA Today on Tuesday night, adding a memorial service is being prepared for her in the spring.
LOS ANGELES, CA・2 DAYS AGO

Howard Stern has slammed Joe Rogan in the past for spreading misinformation about the COVID-19 vaccine, but that doesn’t mean Stern wants to see the controversial Spotify radio host shunned in public opinion. Speaking on his Sirius XM radio show this week, Stern said he doesn’t believe in censorship and expressed a level of admiration for Rogan’s podcast empire. “I don’t listen to Joe Rogan. I know Joe from 100 years ago,” Stern said this week (via Mediaite). “We’re no longer friendly. We were friendly at one point — I just knew him as the funny guy, as a comedian —...
CELEBRITIES・1 DAY AGO
Insider

Kanye West told Hollywood Uncovered that he's decided not to tweet and overshare about his divorce from Kim Kardashian.
CELEBRITIES・2 DAYS AGO
GMA

Weatherman appears to fart on live TV and people are shocked

A weatherman in Louisville, Kentucky has been accused of farting live on air after a video of the incident went viral. While reporting on a cold front coming in from the Midwest, WDRB meteorologist Marc Weinberg paused his broadcast and appeared to create a warm front by farting, before continuing with the weather.
LOUISVILLE, KY・2 DAYS AGO

This TikTok gives a whole new meaning to the phrase, “I tested positive”.In a hilarious video that now has over 16 million views, TikToker Hannah Alexis Grace shared her boyfriend’s confused reaction to finding out she’s pregnant over text.The TikTok begins with screenshots from the couple’s conversation, with a voiceover saying “Here’s how telling my boyfriend I’m pregnant went.” Hannah tells her partner, Charlie, that she finally knows why she feels ill, and sends him a picture of a positive pregnancy test. His response? “Are you joking me”.He asks his girlfriend if anyone knows she’s positive, to which she responds...
RELATIONSHIP ADVICE・1 DAY AGO
Page Six

Julia Fox is continuing to follow in the steps of Kim Kardashian — this time by way of a couple’s nickname. The “Uncut Gems” star posted a paparazzo’s photo of her and Kanye West wearing their matching leather ensembles at Paris Fashion Week, writing on her Instagram Story Monday, “Juliye 🖤.”
BEAUTY & FASHION・3 DAYS AGO
Distractify

While most people have a basic idea of who Hugh Hefner was and how his Playboy empire operated, the A&E docu-series Secrets of Playboy will shed a different light on the founder's legacy. Throughout the 10-part series, viewers will get to hear from some of Hef's former Playmate girlfriends, and...
RELATIONSHIPS・3 DAYS AGO
The Independent

A brand new Kanye West documentary shows footage of his mother warning him off becoming “too arrogant”.The controversial rapper’s career is profiled in a three-part series titled Jeen-Yuhs, which will be released on Netflix in February.Filled with footage of his rise from producer to successful rapper, and filmed in Chicago and New York, the documentary also focuses on West’s relationship with his mother, Donda.In a moment from 2001, West is visiting his mother in her Chicago home when he’s discussing his success after producing the Jay-Z song "Izzo (HOVA)".“I was thinking about something I was going to say to...
MUSIC・3 DAYS AGO
StyleCaster

Since his death, fashion lovers have wondered about Thierry Mugler‘s net worth and how much he made from his eponymous brand, MUGLER, before he passed. Mugler—whose full name was Manfred Thierry Mugler—died on January 23, 2022 of “natural causes.” He was 73 years old. “#RIP We are devastated to announce the passing of Mr Manfred Thierry Mugler on Sunday January 23rd 2022. May his soul Rest In Peace,” his team wrote in an Intagram post at the time in both English and French. “Nous avons l’immense tristesse de vous faire part du décès de Monsieur Manfred Thierry Mugler survenu dimanche 23...
CELEBRITIES・2 DAYS AGO
Footwear News

Who Is Lori Harvey? What You Need to Know About Michael B. Jordan’s Girlfriend — the Style Influencer & Daughter of Steve Harvey

Michael B. Jordan has fallen in love — with Lori Harvey, to be specific. The “Creed” star revealed he was in a relationship with the style influencer this time last year. Since going public as a couple, both Jordan and Harvey have shared multiple romantic snaps together on social media. They’ve been linked since November 2020. In a June 2021 interview, Jordan’s girlfriend Harvey told Bustle: “We know there are people that love and support us and want to see us. So [we want to] give just enough, but keep the majority of it just for us. We’re trying to find...
CELEBRITIES・2 DAYS AGO
Cosmopolitan

Khloé Kardashian has addressed the fact Tristan Thompson fathered a third child, with a subtle Instagram caption. Last month, basketball player Tristan made headlines when personal trainer Maralee Nichols alleged she had given birth to his child, after getting pregnant while he was in a relationship with Keeping Up With The Kardashian's Khloé.
NBA・23 HOURS AGO
iHeartRadio

Miss Jackson is telling all
CELEBRITIES・1 DAY AGO