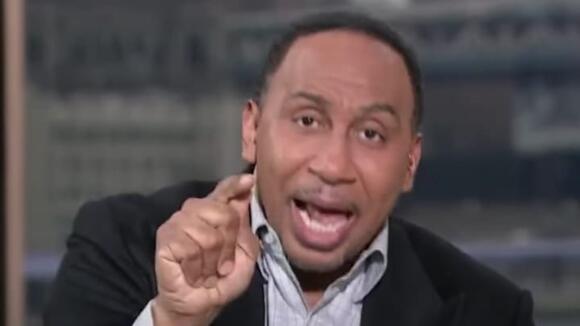 The Golden State Warriors came into Brooklyn and clowned the Nets last night. Stephen Curry laced up his sneakers and delighted in draining nine three-pointers in the blowout. Kyrie Irving was, once again, not present due to Reasons. A growing conversation about Kevin Durant having buyer's remorse in the running mate department grew a bit louder because how could it not? One elite guard is slightly less complicated and mercurial than the other. One elite guard is always available while the other can be off on a personal vision quest at any given moment.

Contextualizing athletes in a more dynamic backdrop of mental health and citizenship is difficult. A fair person should be patient, understanding and open-minded until a player starts actively hurting their team. Through that lens, it certainly seems that Irving is doing an equal amount of harm as he is doing good for Steve Nash, Durant and the rest of his Brooklyn teammates. So the door for criticism is wide enough even for the careful to walk through.

Stephen A. Smith, as he's wont to do, dispensed with any tip-toeing on this morning's First Take, aiming a flamethrower in Irving's direction, priming the pump, and unleashing holy hell like a Third-Act Arnold Schwarzenegger.

"I actually hope Kyrie Irving gets cut," Smith said in what is apparently his inside voice. "I mean, this is a disgrace." Smith correctly points out that every respectable team has waxed the Nets' backsides, which honestly sounds a bit kinky.

He said some other stuff too with great passion because he's the most dynamic and energetic sports pundit of the century and this is just a typical Wednesday. What a talent.

Call us crazy but we're not exactly feverishly refreshing the NBA transaction page waiting for Irving to be cut. There are still 67 regular-season games to be played before the real meaningful stuff happens. Most people would be wise to pace themselves but Smith is uniquely suited to keep this fever going forever.

SAS, didn't say that about Aaron Rogers...at least Kyrie didn't lie. New York is being totally unreasonable with those mandates that are about to be struck down in the Supreme Court.

He's right! Kyrie has a history of abandoning his teams! That was horrible last night! Even when a home team loses, the fans don't just turn on them!! They turned on Brooklyn last night, and was cheering for Steph!

For what I'm sure are very good and not at all dumb reasons, the Chicago Bulls' much-anticipated home matchup with the Brooklyn Nets tipped off after 9 p.m. CT last night. The late start time proved to be a blessing in disguise because it allowed more young, impressionable Chicago fans to miss the contest entirely due to hard-and-fast bedtime conflicts. The poor kids who were allowed to monitor the proceedings may be temporarily scarred as the Nets, including Kyrie Irving, constructed a 138-112 demolition.
NBA・8 DAYS AGO
The Big Lead

Stephen A. Smith: Nets Winning a Championship With Kyrie Irving Would Be a Disaster

The Brooklyn Nets are once again considered championship favorites due to their overwhelming talent but the 2021-22 season has been a challenge. Kevin Durant was immaculate until he got hurt over the weekend and will likely be out through the All-Star break. James Harden got off to a very bad start and managed to steady things out but still hasn't reached the same level of dominant MVP-level scorer he was when the Nets traded for him. And Kyrie Irving, of course, didn't suit up for his team until January because of vaccine mandates and will only play road games from here on out until something changes in New York City.
NBA・3 DAYS AGO
The Big Lead

Stephen A. Smith Questions if Giannis Antetokounmpo is as Valuable in the Playoffs as Ja Morant

Ja Morant's third NBA season has been absolutely electric and his Memphis Grizzlies are no longer in rebuilding mode. They are playoff contenders and, if Morant continues on his trajectory, aren't far from championship contention. When players such as Morant skyrocket into the stratosphere, it can break people's brains. That...
NBA・2 DAYS AGO
hotnewhiphop.com

Over the last few months, Stephen A. Smith has been particularly hard on Kyrie Irving due to his stance on the vaccine against COVID-19. Kyrie is currently refusing to get vaccinated, and Smith has had very little patience for this. While Smith respects Kyrie's decision, he has also leveled all types of slander that has ultimately rubbed fans the wrong way.
NBA・1 DAY AGO

Stephen A. Smith ERUPTS After Getting Called Out for Attacking Kyrie Irving’s Character: ‘I Don’t Give a Damn!’

Stephen A. Smith has a ton of respect for Kyrie Irving on the basketball court, but he’s often quick to criticize the NBA superstar for his actions outside the arena. This week, Smith returned to his First Take chair after a month-long battle with Covid and claimed it would be a “disaster” if the Brooklyn Nets win a championship this season while catering to Irving. After previously barring him from the team, the Nets are allowing Irving to participate as a part-time player, despite refusing to comply with New York City’s vaccine mandate.
NBA・2 DAYS AGO
Sports Illustrated

WASHINGTON -- Brooklyn Nets guard Kyrie Irving says he is embracing the pressure that comes with trying to carry the team's offense amid Kevin Durant's absence due to a left knee injury. "I like the pressure," Irving said after scoring 30 points in 38 minutes during a 119-118 win over...
NBA・1 DAY AGO
firstsportz.com

“He can’t be trusted”- Stephen A. Smith urges the Nets winning because of ‘unvaccinated’ Kyrie Irving would send a wrong message

Kyrie Irving made his comeback to the NBA earlier this month, and since then he has not looked like someone who hasn’t played in seven months. ESPN Analyst Stephen A. Smith would agree to it as he is a big fan of Kyrie’s on-court skills. But, Smith has been very vocal that he does not like Kyrie’s attitude and never has.
NBA・1 DAY AGO

In their first game with Kyrie Irving, it took a big comeback for the Brooklyn Nets to win. The Nets are hoping their second game with Irving goes smoother Monday night when they visit the Portland Trail Blazers for a makeup game. The game was originally slated for Dec. 23...
BROOKLYN, NY・11 DAYS AGO
Newsday

SAN ANTONIO — Although Kyrie Irving helped deliver the 2016 NBA title to Cleveland along with LeBron James, he wasn’t exactly treated as a returning hero when the Nets visited the Cavaliers on Monday at Rocket Mortgage Fieldhouse. Irving engaged in a bitter exchange with a group of fans at courtside, directed an obscenity at one and was fined $25,000 for the incident, president of league operations Byron Spruell announced on Thursday.
NBA・1 DAY AGO
abc7ny.com

As Kyrie Irving stayed away from his Brooklyn Nets teammates the past three months, he wondered what it would be like to venture out and watch a game like a fan. "I can't really go out and watch at a local bar or anything like that," Irving, who is still not vaccinated against COVID-19, said recently. "I would love to be, 'OK, [Kevin Durant] hit a shot, let's [take a shot]'; I'm joking, but just having fun watching it. Sometimes I get to watch it alone and sometimes I get to watch with my family."
NBA・12 HOURS AGO
Reuters

Kyrie Irving scored 30 points and LaMarcus Aldridge added a season-high 27 off the bench to fuel the visiting Brooklyn Nets to a 119-118 victory over the Washington Wizards on Wednesday. Washington whittled a 16-point deficit down to one point on two occasions, the last after Kyle Kuzma drained a...
NBA・1 DAY AGO

Brooklyn Nets' Kyrie Irving experiment: Lessons from the first four games and what comes next

Wednesday marks two weeks since Brooklyn Nets guard Kyrie Irving made his belated 2021-22 debut. Ineligible to play in home games because of New York City's vaccine mandate, Irving rejoined the Nets as a part-time player after they initially opted against using him in the road games he is able to play.
NBA・2 DAYS AGO
Yardbarker

Irving, who used the play for the Cleveland Cavaliers and helped them win a championship, cursed at a fan during Brooklyn’s 114-107 loss. He told the courtside fan that he “got y’all a championship and motherf-----s still ungrateful.” A video of the exchange went viral. Irving...
NBA・1 DAY AGO
fadeawayworld.net

Stephen A. Smith Defends Kyrie Irving After Altercation With Cavs Fans: "Kyrie Averaged 27 In That Finals And Hit The Dagger To Secure The Title.”

Kyrie Irving recently lived a questionable moment with some Cleveland Cavaliers fans trying to get under his skin. The Brooklyn Nets superstar returned to the city Monday night, dropping 27 points on his first team in the league. That wasn't enough for the Nets, who succumbed to the Cavs 114-107....
NBA・1 DAY AGO
The Big Lead

Five Lakers Trade Targets Who Could Salvage the Season

The Los Angeles Lakers have struggled mightily this season and are 22-22 through 44 games. The team's Big Three of LeBron James, Russell Westbrook and Anthony Davis has not fit well together and the roster needs a major shakeup if Frank Vogel's squad plans to make any noise in the postseason. The problem is, the Lakers don't have a ton of assets other NBA teams would be excited out. Still, something could be worked out.
NBA・3 DAYS AGO
FastBreak on FanNation

The Golden State Warriors are hosting the Detroit Pistons on Tuesday evening, and the Warriors shared an awesome photo of Klay Thompson and Steph Curry.
NBA・2 DAYS AGO
fadeawayworld.net

The trade deadline is just around the corner in the NBA world. There's no doubt a lot of teams will be looking to add players or shake up their roster. Multi-team trades are more commonplace in the modern NBA, and it is possible that we see some blockbuster trades ahead or at the deadline.
NBA・1 DAY AGO
Lakers Nation

A potentially major development occurred in the Los Angeles Lakers’ 111-104 loss to the Indiana Pacers on Wednesday. With 3:52 left in the fourth quarter, head coach Frank Vogel deployed Malik Monk onto the court, taking Russell Westbrook out of the game in crunch time — an adjustment rarely seen in the first half of the 2021-22 season. About four minutes earlier, L.A. had lost its lead that they held onto for the majority of the game.
NBA・1 DAY AGO
Sports Illustrated

The former Celtic is making his first return to Boston since leaving the franchise.
NBA・2 DAYS AGO