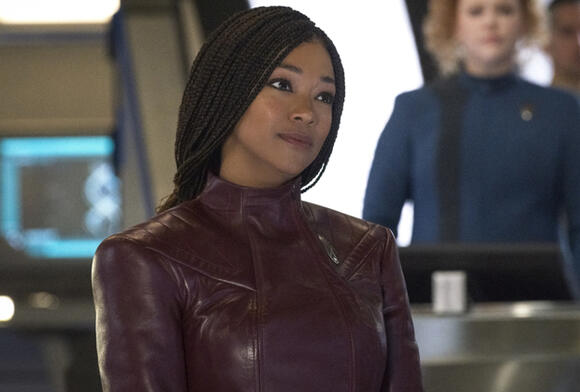 After getting to the root cause of the Burn, a disastrous event that rendered all dilithium in the galaxy useless, Star Trek: Discovery ’s eponymous crew can look ahead to the future in Season 4.

The new season, which premieres Thursday on Paramount+, will see Burnham and Co. continue their efforts to rebuild the Federation now that ships can travel at warp speed, and representatives from different worlds like Trill and Ni’Var are expressing interest in rejoining the historic union of planets.

“It’s certainly not a done deal at the end of Season 3, so I think [at] the beginning of Season 4, that work would certainly continue,” showrunner Michelle Paradise tells TVLine, noting that we’ll “find out in the first episode what our heroes have been up to in the time since Season 3.”

Upcoming episodes will find the crew faced with a scientific anomaly that poses a major threat to the galaxy and is also something that they don’t quite understand initially. The Discovery boss notes that show doesn’t directly address the pandemic, but they also couldn’t ignore it in their storytelling.

“When we began writing the season, we were in the midst of it, and I say that acknowledging that we are still in it,” Paradise shares. “We’re taking the spirit of what we were and are feeling as a global family, and then looking through the eyes of our characters and seeing how they would respond to something that is bigger than themselves. In [this] case, it’s a scientific anomaly. We don’t know at the start of the season what it is, where it came from, what is its nature. Our heroes are going to have to figure that one out.”

With the pandemic affecting everyone on a global scale, the writers felt like it was something they should “certainly reflect, at least in terms of the emotions that it brings up in us, and the uncertainty.” 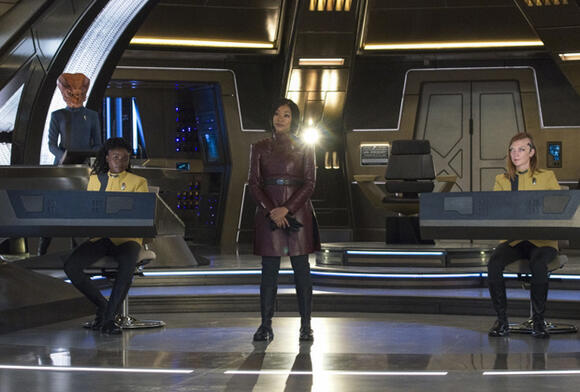 This anomaly is not a pandemic, but they wanted to “create something that would allow us to explore, thematically, those things that we were and are still dealing with: the uncertainty of it, the emotional questions, the questions that come out of, ‘How do we respond to this thing? What happens if this impacts us individually? What happens when this impacts those we love?’ Those larger questions are things that we can explore over the course of the season with this anomaly that’s out there.”

Season 4 will also test Burnham, who finally steps into the captain’s chair full-time. It’s a stark contrast to where we began with her in Season 1 as an officer who had been stripped of her rank and faced life imprisonment for mutiny. Buy after securing a peace treaty that ended the Klingon War (and earned her a Medal of Honor), saving the galaxy from Control and then solving the mystery of the Burn — all while stepping into her own as a leader — her ascension to the chair was inevitable.

“Over the course of the last three seasons, we’ve watched her grow and change quite a bit. When we get to the end of Season 3, we as an audience feel, and certainly the character feels, like there is no one better to sit in that chair,” Paradise says. “She has earned the captaincy. She’s ready for it.”

That said, the captain’s seat is new to her and comes with a set of new challenges. As Burnham steps into this different role, the season will explore questions about who she is as both a captain and leader and how she can navigate different responsibilities.

“Season 4 is our only season that we’ll ever get to see her first time in the captain’s chair,” Paradise adds, “so I think that’s going to be a really wonderful journey, to watch her figure that out for herself and find who she is in that chair.”

Burnham & Co. are coming back for even more space adventures. Star Trek: Discovery has been renewed for Season 5, it was announced on Tuesday afternoon. Season 4, which is streaming on Paramount+, will resume with new episodes starting Thursday, Feb. 10. The current season finds Burnham stepping into the captain’s chair, and the titular crew chasing a scientific anomaly that poses a major threat to the galaxy — a story partially inspired by the current global pandemic. “We’re taking the spirit of what we were and are feeling as a global family, and then looking through the eyes of our characters and...
TV SERIES・8 DAYS AGO
TVLine

Warning: The following contains spoilers about a new twist in Episode 3 of Hulu’s How I Met Your Father. Tuesday’s How I Met Your Father introduces a fifth potential baby daddy: Jefferson Elementary vice principal Drew (Drake & Josh‘s Josh Peck), who strikes up a connection with Sophie upon their second time meeting. The first time, as we’d soon discover, was at Sid and Hannah’s engagement party, when Sophie tapped Drew on the shoulder and asked if he had a phone charger handy. “In our pilot, [Sophie] makes clear that she met the father that night, which leaves a little bit of...
TV SERIES・2 DAYS AGO
TVLine

At long last, Prime Video is going to Upload new episodes of the Robbie Amell-starring comedy: Season 2 will premiere with all seven installments on Friday, March 11, almost two years after the satirical sci-fi series debuted on May 1, 2020. (Thankfully, Prime Video has also released a very necessary and helpful Season 1 recap video, which you can view above.) The show, from creator Greg Daniels (The Office), is set in a technologically advanced future where humans can choose to be “uploaded” into a virtual afterlife. The Flash vet Amell stars as a computer programmer who dies unexpectedly and finds...
TV SERIES・6 DAYS AGO
FanSided

The fate of Star Trek: Discovery has finally been revealed

The future of Star Trek: Discovery has been revealed. For the longest time the future of Star Trek: Discovery was up in the air. Reports of the fourth season being shortened by two episodes during production started to pop up, with rumors of the series going way over budget for season four. Then it was reported that every active Star Trek show from Discovery, to Picard, to Lower Decks were all filming seasons back-to-back.
TV SERIES・8 DAYS AGO

A big part of the upcoming second season of Star Trek: Picard is the return of the character Q, the enigmatic superbeing and longtime foil of Jean-Luc Picard. We have seen Q in trailers for the season and now we are learning a bit more about why Q is back.
TV SERIES・12 DAYS AGO
treknews.net

It’s a good day to be a fan of Paramount+’s Star Trek series. The streaming service has announced new season premiere dates and additional 10-episode season pickup orders across the live-action series (including for one that has yet to premiere). Both Star Trek: Discovery and Star Trek: Strange New Worlds have been renewed, for Seasons 5 and 2, respectively. (Picard was previously renewed for Season 3 and is currently in production.)
TV SERIES・8 DAYS AGO
Paste Magazine

When Star Trek: Discovery premiered in 2017, it was to no small amount of fanfare. The first new Star Trek series to launch since Enterprise took its final bow in 2005, Discovery marked a bright new beginning not just for the long-lived science fiction franchise, but for the Star Trek Originals empire ViacomCBS had gone all in on when it made its flagship subscription service, CBS All Access (now Paramount+), the home for all things Federation. That it also found two women of color in starring roles—Sonequa Martin-Green as Michael Burnham, the series’ bull-headed idealist lead, and Michelle Yeoh as Phillipa Georgiou, the Star Fleet Captain / Terran Emperor who mentors and terrorizes her in turn—well, that just made Discovery’s future feel all the brighter.
TV SERIES・14 DAYS AGO

Amidst the exciting Star Trek-related announcements that have dropped today, we now have confirmation of a premiere date for the upcoming second season of Star Trek: Picard on Paramount+. Season 2 of Picard will premiere on Thursday, March 3, with new episodes dropping weekly on Thursdays. The show is currently in production on its third season.
TV SERIES・8 DAYS AGO
geekspin

Will there be a season 4 of Star Trek: Lower Decks?

It has been a great week for Star Trek fans. On Tuesday, Paramount+ surprised Trekkies with a number of season renewals across the sci-fi franchise. Star Trek: Discovery has been renewed for season 5, while its spinoff series Star Trek: Strange New Worlds has been picked up for season 2 ahead of its series premiere in May. But will there be a season 4 of Star Trek: Lower Decks?
TV SERIES・7 DAYS AGO
CinemaBlend

Star Trek's Picard, Discovery And The Rest Of The Franchise Got Big News From Paramount+

Star Trek ramped up its production of shows following the premiere of Star Trek: Discovery, and that trend of new content will not end anytime soon. Picard, Discovery, and all the other shows of the franchise just got some great news, and fans of New Trek will undoubtedly be glad to hear about this big news from Paramount+.
TV SERIES・8 DAYS AGO
SuperHeroHype

Star Trek: Discovery, Strange New Worlds, & Lower Decks Get Early Renewals. While Star Trek: Discovery is currently on hiatus from its fourth season, its future is assured. Paramount+ has renewed the series for a fifth season. Additionally, Paramount+ offered a vote of confidence in the new spinoff series, Star Trek: Strange New Worlds, by renewing it for season 2 ahead of its premiere later this year. The animated comedy series, Star Trek: Lower Decks, has also been renewed for a fourth season.
TV SERIES・8 DAYS AGO

A single change can be dangerous, according to the Star Trek: Picard Season 2 trailer. And while we can’t wait to see exactly how that plays out, we’re more excited about the person Jean-Luc Picard (Sir Patrick Stewart) is turning to for help in the new season. Whoopi...
TV SERIES・5 DAYS AGO
treknews.net

Playmates reveals initial lineup of Star Trek figures from The Next Generation, The Wrath of Khan and Discovery

Star Trek action figures return later this year with new and retro from Playmates. While Star Trek continues to go boldly into the future with a variety of new series and season renewals, an old ally of the franchise is returning with a new line full of collectibles later this year.
SHOPPING・2 DAYS AGO
Wyoming News

Tudyk and members of the cast talk with Rick Damigella about the new season of the Syfy series.
TV SERIES・2 DAYS AGO