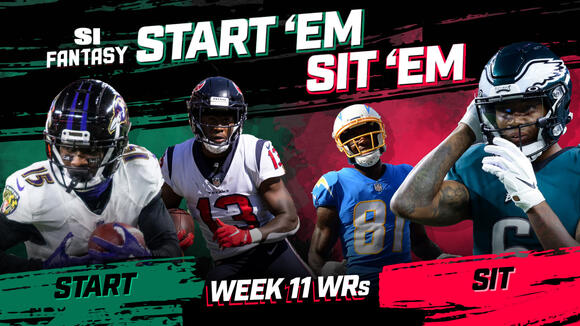 In a plus matchup vs. the Bears, Marquise Brown tracks as the Week 11 WR start of the week.

Start ‘Em, Sit 'Em is the ultimate look at the best and worst matchups based on a PPR scoring system in fantasy football. This column will not cover the elite players in the NFL like Patrick Mahomes, Christian McCaffrey, Davante Adams, or Travis Kelce. Instead, I'll look at the players you have the most questions about to help you set the most effective starting lineup possible. For all of your final fantasy lineup decisions, be sure to check out my weekly player rankings which will be updated daily throughout the 2021 NFL season.

Start of the Week

Marquise Brown at Bears (1 p.m. ET, CBS) : Brown’s last stat line was a forgettable one, as he scored just 9.7 fantasy points in a surprising loss to the Dolphins. He’s now been held under 10 points in two of his last four games, but I like him to rebound in Chicago. The Bears have allowed the fifth-most fantasy points per game to wideouts, and three have scored 23-plus fantasy points against them in their last three games.

Brandin Cooks at Titans (1 p.m. ET, CBS) : Cooks, one of the most targeted wide receivers in the league, should be considered a solid No. 2 fantasy option against the Titans. No team in the league has allowed more fantasy points to wide receivers, as their defense has surrendered 14 touchdown catches to the position. Tennessee has also allowed the second-most points to receivers out wide, so Cooks should produce.

Hunter Renfrow vs. Bengals (4:05 p.m. ET, CBS) : Renfrow has been hot in recent weeks, scoring a combined 35.5 fantasy points in his last two games. I’d keep him in your lineups this week too, as the Raiders face a Bengals defense that’s allowed six wideouts to score 11 or more fantasy points in their last five games. That includes a 16.4-point performance from fellow slot receiver Jamison Crowder back in Week 8.

Jaylen Waddle at Jets (1 p.m. ET, CBS) : Waddle’s 10.1-point performance last week left something to be desired, and I’m expecting him to rebound when Miami faces the Jets. Their “defense” has allowed an average of 43.8 points and 472.5 yards of offense in their last four games, so Waddle is in a good position to find success. New York has also surrendered the fourth-most points per game to slot receivers since Week 7.

D.J. Moore vs. Football Team (1 p.m. ET, Fox) : Fantasy fans have been left wanting Moore from D.J., who has scored fewer than 10 fantasy points in each of his last three games. The good news is that the Panthers will turn to Cam Newton this week, and a matchup against the Football Team is a positive one. Their defense has given up the second-most fantasy points a game to wideouts, so Moore is worth starting this week.

Sit of the Week

Mike Williams vs. Steelers (8:20 p.m. ET, NBC) : Williams averaged a stout 23.2 fantasy points in his first five games. Since then, he’s averaged 5.9 points. Not good. He's no longer a player who is considered a must-start, and a matchup against the Steelers makes him a risk-reward option. Their defense has allowed no touchdown and the fewest fantasy points per game to enemy receivers lined out wide since Week 7.

DeVonta Smith at Saints (1 p.m. ET, Fox) : Smith has been on fire over the last two weeks, scoring a combined three touchdowns and 46.2 fantasy points. So while he will be active in most leagues, keep in mind that this week’s matchup against the Saints, and more notably CB Marshon Lattimore, is a difficult one. Just ask A.J. Brown, who was held to one catch last week. Start Smith but temper your fantasy expectations.

Kenny Golladay at Buccaneers (Mon. 8:15 p.m. ET, ESPN) : Golladay is as healthy as he's been all season coming off a bye and a matchup against the Buccaneers is good on paper. Or is it? While their defense struggled against wideouts earlier in the season, the position has been far less effective against them over the last four weeks. The Giants could be at full strength at wideout too, so his targets could be limited this week.

Allen Robinson vs. Ravens (1 p.m. ET, CBS) : Robinson is coming off his best game of the season, posting four catches for 68 yards and 10.8 fantasy points. While that's a positive, it still says a lot about his struggles in the stat sheets. Robinson has also taken a backseat to Darnell Mooney, who has become the top target for Justin Fields. Unless you’re in dire need, I will keep Robinson on the sidelines against the Ravens.

Tyler Boyd at Raiders (4:05 p.m. ET, CBS) : Boyd has not benefited much from the Bengals' improved pass attack, scoring fewer than seven fantasy points in four of his last five games. That trend is likely to continue this week too, as a matchup against the Raiders looms. Their defense has been tough on slot receivers, allowing just one touchdown and the sixth-fewest fantasy points per game on such routes this season.

Michael Fabiano is an award-winning fantasy football analyst on Sports Illustrated and a member of the Fantasy Sports Writers Association (FSWA) Hall of Fame. Click here to read all his articles here on SI Fantasy . You can follow Michael on Twitter , Facebook , YouTube , and Instagram for your late-breaking fantasy news and the best analysis in the business!

Since the Miami Dolphins’ surprise firing of Brian Flores, some interesting reports have surfaced regarding his tenure with the team. One report revealed that Flores was apparently the driving force behind the Dolphins’ involvement in the Deshaun Watson sweepstakes. According to the same report, owner Stephen Ross didn’t have an interest in trading for the quarterback.
NFL・21 HOURS AGO
Sportsnaut

Super Bowl 2022: The Tampa Bay Buccaneers are the reigning NFL champions, but who'll make the playoffs — and lift the Lombardi Trophy at the end of this season?
NFL・2 DAYS AGO
FanSided

FOX NFL broadcaster and former Cowboy great Troy Aikman didn’t seem to be too happy that he and Joe Buck were in Tampa Bay rather than Dallas. As Buck teased the next Sunday NFC playoff matchup between the Cowboys and 49ers on CBS, Aikman voiced his displeasure with some coded language.
NFL・2 DAYS AGO

NFL picks against the spread. NFL Divisional Playoffs edition. Oh boy, this two-day slate is going to be an absolute
NFL・1 DAY AGO
Sportsnaut

The safety was knocked unconscious after making a tackle, and Akers appeared to taunt him after the play had ended.
NFL・1 DAY AGO
Larry Brown Sports

The Pittsburgh Steelers will have to address the quarterback position this offseason for the first time in 18 years. They won’t have that high of a draft pick after reaching the playoffs, so some have wondered if they could explore blockbuster trade scenarios. That does not appear to be the plan.
NFL・2 DAYS AGO
USA TODAY

Prescott collided with the referee who was placing the ball for the final play, causing a slight but costly delay.
NFL・1 DAY AGO

The Philadelphia Eagles were eliminated from the postseason after their Wild Card round loss to the Tampa Bay Buccaneers. It wasn’t a good showing by the Eagles on either side of the ball, as quarterback Jalen Hurts turned the ball over twice and helped Philadelphia put just 15 points on the board in the disappointing loss. Hurts’ connection with talented rookie wide receiver DeVonta Smith, who didn’t seem to be on the same page as his quarterback, was dissected following the playoff loss. However, Smith got brutally honest about Hurts when asked about the signal-caller’s future as the Eagles’ QB1, via Dave Zangaro of NBC Sports.
NFL・1 DAY AGO
Fox News

The Pittsburgh Steelers are a mighty underdog against the Kansas City Chiefs on Sunday night in their AFC wild-card playoff game. Steelers head coach Mike Tomlin took it up a notch when he was asked by NBC’s Michelle Tafoya about what adjustments were needed for Pittsburgh to avoid being blown out and possibly upsetting Kansas City in the game.
NFL・2 DAYS AGO
Sportsnaut

Following yet another late-season meltdown, Kyler Murray and the Arizona Cardinals are headed home for the winter. Losers of four
NFL・1 DAY AGO
WGR550

When it comes to the New England Patriots, we’ve been through so much. Nearly twenty years of domination. Three wins from ‘01 to ‘19. You know a team is in your head when you can remember those three wins without even having to look them up.
NFL・2 DAYS AGO

Just like the rest of the Dallas Cowboys fan base, former team quarterback Tony Romo didn’t like how the Wild Card game against the San Francisco 49ers ended. It’s not that Romo is blaming anyone. The Cowboys could have done better in setting up the final play, and the referees might have some shortcomings as well. However, for the four-time Pro Bowler, it was just a frustrating ending for the home team and their fans who were hoping for that miracle to give them the victory.
NFL・2 DAYS AGO
USA TODAY

Several of the NFL's foremost Super Bowl contenders made strong statements this weekend, including the Bills and Buccaneers.
NFL・2 DAYS AGO
Sports Illustrated

While coach Pete Carroll and general manager John Schneider will return in 2022, the Seahawks ensured they won't be sticking to status quo after a disappointing 7-10 campaign with defensive coordinator Ken Norton Jr. reportedly not being retained. The decision to part ways with Norton couldn't have been an easy...
NFL・18 HOURS AGO
Sportsnaut