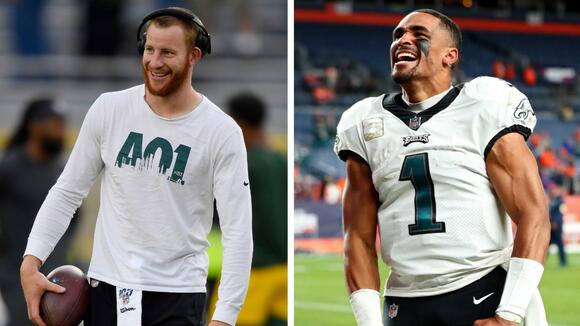 Jalen Hurts just made his 14th NFL start as an NFL quarterback with the Philadelphia Eagles and Joe Giglio, interestingly, compared those 14 starts with Carson Wentz's first 14 starts as an Eagle.

Hurts has actually been much better than Wentz to start his career.

While Wentz had slightly more passing yards, Hurts is dominant in the rushing category and has a much better TD-INT ratio, while both led the Eagles to 5-9 records over those 14 games.

Both Hurts and Wentz were leading rebuilding Eagles' teams with new coaches to start their careers. Hurts took over for Wentz at the end of last season, but effectively, this is basically his rookie season as the team's starting QB under new coach Nick Sirianni, while Wentz was playing for Doug Pederson.

And although these stats favor Hurts, to be fair, Wentz's best career season came in his second NFL season, in starts 17 through 29. In 2017, Wentz led the Eagles to an 11-2 record throwing for 33 touchdowns and just seven interceptions before tearing his ACL. Of course, the Eagles went on to win the Super Bowl that year with Nick Foles taking over for Wentz.

So needless to say, Hurts will have his work cut out for him to match that effort in starts 17 through 29, but so far he's shown promise, especially of late.

On Tuesday's 94WIP Morning Show, Sirianni spoke about Hurts' improvement as a QB.

"The play that he made to Dallas Goedert on the 3rd-and-12," Sirianni told Angelo Cataldi when asked about Hurts' progress. "What he did was, it was good protection, but he had to move a little bit in the pocket and he slid, he kept great ball security. Man, he's doing such a great job of taking care of the football in terms of interceptions, but I know last year he had a couple fumbles to his name. And he's done such a good job of protecting that football when he's a runner or when he's in the pocket."

Despite the ascension of Hurts at just 23-years-old, the reports continue to trickle out that the Eagles aren't convinced Hurts is their franchise QB. Earlier this season, Philadelphia was rumored to be after Deshaun Watson. Now, inklings of interest in Russell Wilson for next season continue to surface, first from ESPN's Chris Mortensen and then this week from Peter King .

At 4-6, Hurts and the Eagles find themselves in the midst of a playoff race. The Eagles have an extremely favorable schedule going forward, facing the Saints, Giants twice, Jets, and WFT twice over their next six games, finishing with the Dallas Cowboys in Week 18—who could potentially be resting their starters with the division title locked up.

While the 2022 NFL Draft class is not viewed as strong by many, that doesn’t mean the Eagles feel the same way. It also doesn’t mean the narrative it is a weak quarterback class is right.
NFL・19 HOURS AGO
nfldraftdiamonds.com

Jim Irsay is not a person that will shy away from words, but did he just call out his starting quarterback? In a tweet that came out today, Irsay made a statement that you need a QB and offense who can score 30 or more points in regulation. It sounds...
NFL・16 HOURS AGO
Sportsnaut

Super Bowl 2022: The Tampa Bay Buccaneers are the reigning NFL champions, but who'll make the playoffs — and lift the Lombardi Trophy at the end of this season?
NFL・2 DAYS AGO

NFL picks against the spread. NFL Championship Sunday edition. And then there were four. With three road teams winning on
NFL・2 DAYS AGO
Yardbarker

The Kansas City Chiefs beat the Buffalo Bills, 42-36, in overtime at Arrowhead Stadium on Sunday evening. The game was a wild one, with several lead changes in the game’s final two minutes. Ultimately, the Chiefs were able to force overtime, before scoring the game-winning touchdown on a pass from Patrick Mahomes to Travis Kelce.
NFL・2 DAYS AGO

All eyes have been on Aaron Rodgers after the Green Bay Packers lost their playoffs game 10-13 over the weekend. The team lost to the San Francisco 49ers on Saturday, January 22. The 38-year-old admitted after the game that he was feeling "numb," telling reporters: "I didn’t think it was gonna end like this," per Fox News.
NFL・1 DAY AGO
The Spun

Just days after the end of the Green Bay Packers’ season, the team has added a quarterback to their QB room. According to NFL reporter Dov Kleiman, the Packers have signed former LSU product Danny Etling. “Packers signed a new QB,” Kleiman tweeted. “Former Patriots Danny Etling, per his...
NFL・15 HOURS AGO

Sean Payton has reportedly not yet committed to returning to the Saints next season while Troy Aikman could be leaving FOX for Amazon, leaving an opening that could put the Saints coach in the booth.
NFL・2 DAYS AGO
On3.com

Just two days before competing in an NFL divisional round playoff game, Leonard Fournette learned his cousin had died. As tough as it was to swallow, the Tampa Bay running back knew he still wanted to play. He suited up and delivered an impressive two-touchdown performance in spite of his...
NFL・2 DAYS AGO
Larry Brown Sports

The Los Angeles Rams used a huge play late to stun the Tampa Bay Buccaneers on Sunday, and quarterback Matthew Stafford was well aware of how it happened. Stafford found wide receiver Cooper Kupp for a 44-yard gain that set the Rams up in field goal range just before time expired in the fourth quarter. The play came against what was supposed to be an all-out blitz, which left Kupp alone with safety Antoine Winfield Jr. In a one-on-one matchup, Kupp was always going to win. You can see the play in question here.
NFL・2 DAYS AGO
Sportsnaut

With Ben Roethlisberger retiring, there are a lot of eyes on the Pittsburgh Steelers‘ remaining QB room – specifically on Dwayne Haskins. According to ESPN’s Jeremy Fowler, Haskins is going to be getting another shot in 2022. On Sunday he reported that the Steelers plan to place a restricted free agent tender on him.
NFL・2 DAYS AGO
USA TODAY

Ex-Lions QB Dan Orlovsky to Detroit fans who doubted Matthew Stafford: 'I told you so'

Dan Orlovsky's message on ESPN's "Get Up" show was loud, clear and defiant, after his former Detroit Lions buddy Matthew Stafford came up clutch.
NFL・1 DAY AGO
The Spun

Buccaneers head coach Bruce Arians doesn’t want quarterback Tom Brady to feel rushed in making a decision for next season. There have been numerous rumors the last few days on how Brady may call it a career after this season, but there’s been no formal announcement. Arians confirmed...
NFL・1 DAY AGO
Sportsnaut