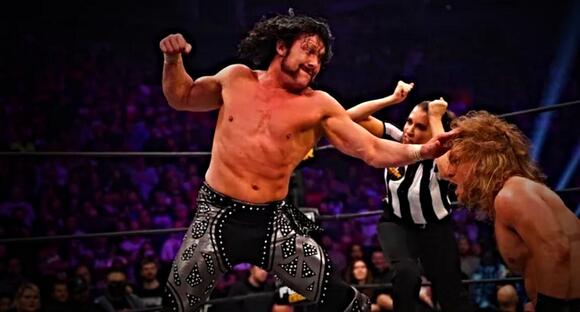 Former All Elite Wrestling World Champion Kenny Omega will be medically evaluated for multiple injuries this week to determine his in-ring status, according to Wrestling Observer 's Dave Meltzer .

Meltzer revealed Omega has been dealing with various injuries for months prior to his title match loss to 'Hangman' Adam Page at AEW's Full Gear pay-per-view event last Saturday.

The evaluation will reportedly determine whether Omega -- who held the AEW World Championship for a record 346 days, initially winning the title at last year's Full Gear event -- will take a break from in-ring competition.

Meltzer reports that Omega was considering taking time off due to his various injuries, but opted to complete his storyline with Page, his former tag-team partner, to culminate the angle with the title change last Saturday.

A video shared by YouTube chiropractor and wrestling fan Dr. Beau Hightower , showed Omega getting an "insane chiropractic adjustment" and included the AEW star admitting to dealing with "bad" vertigo since 2018.

Omega has competed in 32 matches in 2021, most of which were for AEW, but also several for IMPACT Wrestling and Lucha Libre AAA, having simultaneously held both promotion's world championships during his AEW World Championship reign, according to the Wrestling Observer .

In September, Omega was named the No. 1 ranked wrestler by Pro Wrestling Illustrated as part of its annual ' PWI 500' list.

The Winnipeg native had previously ranked No. 1 on the ' PWI 500' list in 2018 after winning the IWGP World Heavyweight Championship while competing primarily for New Japan Pro Wrestling.

Wednesday's episode of AEW's flagship show, Dynamite , will air live from Norfolk, Virginia, and include the homecoming for Page, a native of Halifax, during his first televised appearance as champion since winning the title at Full Gear .

The Real Reason Why the Seahawks Organization is Officially in Crisis

Why the Seahawks Should Trade Russell Wilson

Why the Cowboys Will Win the Super Bowl

Francis Ngannou defends his heavyweight title for the first time this weekend, when he take on interim champion and former teammate Ciryl Gane in the main event of UFC 270.Ngannou (16-3), widely considered to be the greatest power-puncher in UFC history, has achieved 10 of his 11 wins in the promotion via knockout or TKO, with the other coming via submission.In his most recent bout, the French-Cameroonian took the heavyweight belt from Stipe Miocic in March, knocking out the American to avenge a humbling decision defeat from 2018. Gane (10-0), meanwhile, fought and won three times in 2021, the...
UFC・2 DAYS AGO
102.5 WDVE

The Western PA native and Steelers fan has a major request for her 'favorite Steeler.'
NFL・1 DAY AGO
The Independent

Francis Ngannou is a fighting phenomenon: the honorary ‘baddest man on the planet’ as UFC heavyweight champion, and the most ferocious power-puncher in the promotion’s history.The French-Cameroonian’s professional mixed martial arts record stands at 16-3, while his UFC record is 11-2 since his debut in 2015 – with 10 of those wins coming via knockout or TKO.Ngannou, 35, in fact went 6-0 in the company, with five of those victories achieved via KO/TKO and one coming via submission, before he suffered back-to-back decision losses.The first of those two defeats was a humbling by then-champion Stipe Miocic, but Ngannou worked...
UFC・2 DAYS AGO
SPORTbible

Boxing legend Mike Tyson has dismissed reports that he has reached a ‘verbal agreement’ over a lucrative super-fight with YouTuber-turned-boxer Jake Paul. The 55-year-old American superstar made his blockbuster return to the squared circle against fellow boxing legend Roy Jones Jr in an eight-round exhibition fight. Tyson had...
COMBAT SPORTS・1 DAY AGO

Vince McMahon Has Reportedly Given Up On Pushing Former Universal Champion

You never know what might happen when you watch an episode of Monday Night Raw, and this week fans saw former Universal Champion Finn Balor return to WWE programming. Balor returned to face Austin Theory in a singles match, and it was Theory who picked up the win when he pinned Balor clean in a match that only lasted six minutes. After the match Austin Theory continued to disrespect Balor by attacking him.
WWE・1 DAY AGO
Sports Illustrated

Moxley will make his return on Wednesday’s “Dynamite”, his first televised appearance in more than two months.
WWE・1 DAY AGO
stillrealtous.com

Over the last two years fans have seen many WWE Superstars come and go, and in 2021 fans saw Eva Marie make her return to WWE programming. In the weeks leading up to Eva Marie’s return WWE started airing vignettes showing that Eva Marie would be returning with pink hair, but the former WWE star revealed on social media that she recently dyed her hair red.
WWE・2 DAYS AGO
The Independent

A potential fight between Mike Tyson and Jake Paul in Las Vegas is unlikely to be sanctioned.Former UFC champion Michael Bisping believes that strict rules set by the Nevada State Athletic Commission mean that an exhibition encounter will not be licensed. Paul and Tyson are said to be in discussions over a bout, with organisers hoping a clash between the Youtube personality and former undisputed heavyweight champion could generate £36million if held in the American city.Yet Bisping, a former UFC middleweight champion, does not think it would be approved even as reports suggest a verbal agreement between the pair may...
COMBAT SPORTS・13 HOURS AGO

We reported earlier this week here on eWn that Peter Avalon’s AEW contract would be expiring soon and there was some question as to whether he’d re-sign with the company. Avalon will be appearing at today’s AEW Dark TV tapings in Orlando, FL. Due to this, he was forced to cancel his appearance at Zicky Dice’s Outlandish Paradise.
ORLANDO, FL・4 DAYS AGO
Sportsnaut

Many UFC fans have likely been typing Nate Diaz next fight recently in their MMA Google searches, as they wonder
UFC・6 HOURS AGO
PWMania

AEW TNT Champion Cody Rhodes is reportedly not under an Executive Vice President contract with the company. As reported earlier, it was revealed by Fightful Select that Rhodes’ AEW contract expired at the end of 2021, and that he has been working as a free agent ever since then. Rhodes’ status as a free agent has been known by many within AEW for a few weeks now.
WWE・2 DAYS AGO
ewrestlingnews.com

We reported on Monday here on eWn that Eddie Kingston will be out of action for the next several weeks due to an injury. According to a report from the Wrestling Observer, Kingston is dealing with a fractured orbital bone. The AEW wrestler is expected to be out for “what he hopes is around three weeks.”
WWE・2 DAYS AGO

– A new match has been announced for tonight’s episode of AEW Dynamite. AEW announced on Wednesday night that Frankie Kazarian has challenged Lance Archer to a bout on tonight’s show. You can see the video below of Kazarian issuing the challenge:. – As PWInsider notes, Sting’s match...
WWE・1 HOUR AGO
The Independent

Francis Ngannou would relish the opportunity to go head-to-head with Tyson Fury in his next fight.The 35-year-old UFC heavyweight champion faces former team-mate Ciryl Gane in a unification bout in Anaheim California at the weekend, but would take to the octagon with WBC champion Fury having challenged him to a contest wearing MMA’s lighter gloves.Asked if everything goes to plan against Gane whether he would rather face him or defend his title against Jon Jones in his next fight, the Predator told a press conference: “If you give me the two options, I would choose fighting Tyson Fury.One of...
UFC・5 HOURS AGO
ewrestlingnews.com

On Monday, AEW Superstar Peter Avalon took to Twitter to announce that he’s now available for “all” independent dates and bookings moving forward. There has been some speculation in recent weeks on whether or not Avalon would be re-signing with AEW as his contract is said to be expiring.
WWE・1 DAY AGO
PWMania

In an interview with Fox 2 Now in St. Louis to promote the 2022 WWE Royal Rumble PLE, Randy Orton talked about his RKO finishing move:. “Well, it’s quite simple. I jump up as high as I can, grab the guy’s neck and come crashing down to the mat. I’ve been doing it for a long time. I kind of wish I could go back in time and create a finishing move that didn’t entail me jumping up as high as I can and landing on my back. After doing that a couple of thousand times over the last few decades, I’m starting to feel it.”
WWE・6 HOURS AGO

Renee Paquette and Jon Moxley have been a couple for some time now, and in recent years they’ve gone on to get married and welcome a child into the world together. But all good things come from humble beginnings, and there was once a point in time when Renee and Jon were just getting to know one another.
WWE・23 HOURS AGO