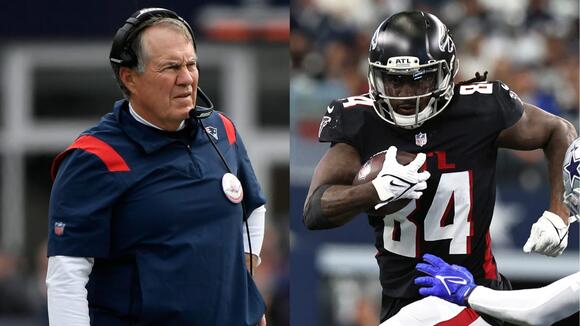 Cordarrelle Patterson's status for the Atlanta Falcons against the New England Patriots on Thursday night is in doubt as he is hobbled with an ankle injury. He's been limited at practice, though maybe we should take it as good news is that he's been practicing at all.

It was reported on Monday that Patterson could miss several weeks .

What's not in doubt is Patterson's importance to the Falcons offense and his ability as a playmaker. He leads the Falcons in rushing yards and touchdowns, receiving touchdowns, and yards from scrimmage.

Patterson spent the 2018 season with the Patriots, and head coach Bill Belichick isn't surprised by the the season Patterson is having. Belichick is not always "quotable'' in his pressers, but he cannot help himself here. To wit:

*"CP is capable, with a ball in his hands, of pretty much anything on the field. He's a tremendous player. We certainly saw that when we were here."

*"He's dynamic. He can break the game open on kick returns, catching the ball, and running the ball, or a combination of both."

*"When you talk about Atlanta, it's Patterson and [Kyle] Pitts in whatever order you want to put them in. They both touch the ball a lot; really Patterson touches it more than Pitts does, but they're both really good."

"CP is having a tremendous year; no play he makes really surprises me. I've seen him make those before. He runs by guys on go routes. He takes short runs or passes and explosively breaks tackles or burst through a hole and chews up 25, 30 or more yards in a hurry."

And one more ... Patterson as a special-teamer. He proved his value there with New England. He had three rushing touchdowns, a receiving touchdown, and kick return for a touchdown in his lone season with the Patriots.

"He did that for us," said Belichick. "He's done that with every team he's been with in the league. He's tough; he's a very competitive player, and he's got a very good and explosive skill set."

The Falcons enter the game as 6.5-point underdogs against the red-hot Patriots, who are 6-4 and have won four in a row. The 4-5 Falcons will need a healthy Patterson making plays, logic says, if they have a legitimate shot of upsetting Belichick and the Patriots on Thursday night.

A day that started full of optimism and hope for the future immediately turned sour for the New England Patriots. Facing a familiar foe in the Buffalo Bills, the Pats were curbstomped to the tune of a 47 – 17 loss. This loss was the worst in Bill Belichick’s playoff career, and more importantly knocked them out of the playoffs.
NFL・23 HOURS AGO
Sportsnaut

While the Buffalo Bills took the field as favorites in Saturday’s AFC Wild Card Game, many believed the New England
NFL・1 DAY AGO
24/7 Wall St.

The Player With the Most Super Bowl Rings

There have been 55 Super Bowls. Of the NFL’s 32 teams, 20 have won Super Bowls. Another 14 have won more than one. At this point, two teams have won six–the New England Patriots and Pittsburgh Steelers. That makes the odds fairly poor for an NFL player to have a Super Bowl ring. Encrusted with […]
NFL・1 DAY AGO
USA TODAY

It felt like January 1991 again for Sal Maiorana as Josh Allen and the Buffalo Bills put forth perhaps the best performance in team history.
NFL・23 HOURS AGO

The Buffalo Bills handed the New England Patriots their worst playoff loss under Bill Belichick. The Bills walked away with a 47-17 victory and Josh Allen finished the night throwing for five touchdowns and rushing for 66 yards. Buffalo had 174 yards on the ground and they scored a touchdown on every possession outside of the final one. Mac Jones threw for 232 yards, two touchdowns and two interceptions — but, he struggled mightily while playing from behind.
NFL・23 HOURS AGO
CBS Boston

Though Darius Slay and Matt Patricia did not seem to get along in Detroit when Slay was working under Patricia as the Lions coach, it seems the cornerback felt like he came away having learned something about himself. Slay tweeted on Saturday: “If u want to kno how good of...
NFL・1 DAY AGO
Democrat and Chronicle

It's peak Bill Belichick misery and NFL fans are here for it.   The Buffalo Bills annihilated the New England Patriots 47-17 in the Wild-Card round at Highmark Stadium.  It was first time the Patriots have given up a touchdown on four straight drives to start a game under Belichick since he took over as head coach...
NFL・1 DAY AGO

A solid outing from quarterback Joe Burrow and a late defensive stand saw the Cincinnati Bengals beat the Las Vegas Raiders 26-19 on Saturday to earn their first NFL playoff victory in 31 years. Burrow threw for two touchdowns as he piloted an efficient Bengals offense that scored on their first four drives. Rookie kicker Evan McPherson made all four of his field goal attempts as the Bengals ended an eight-game playoff losing streak that stretched back to their victory over the now-defunct Houston Oilers in January of 1991. "It feels great winning for us, for the city, for the organization. But, you know, we expected this. So it's not going to be a big celebration like it was when we won the division," Burrow told broadcaster NBC.
NFL・23 HOURS AGO
Los Angeles Times

In an embarrassing performance, Bill Belichick and the Patriots get it rubbed in their faces by the Bills

Earlier this season, Atlanta Falcons wide receiver Calvin Ridley stepped away from the field to focus on his mental health. According to NFL Network insider Mike Garafolo, this situation involving Ridley’s self assessment has not changed, but the Falcons are still holding out hope that they’ll have their 27-year-old wideout back for the 2022 season.
NFL・1 DAY AGO
WGR550

When it comes to the New England Patriots, we’ve been through so much. Nearly twenty years of domination. Three wins from ‘01 to ‘19. You know a team is in your head when you can remember those three wins without even having to look them up.
NFL・14 HOURS AGO
Falcon Report

The New England Patriots were eliminated from the playoffs on Saturday as they lost to the Buffalo Bills, 47-17. This was not the same Patriots team that the league was used to seeing and it certainly was a disappointment that they went out this way. Head coach of the Patriots,...
NFL・12 HOURS AGO
CBS Boston

BOSTON (CBS) — The temperature isn’t cracking double digits and there is a wind chill advisory in Buffalo, but that didn’t stopping David Andrews from wearing his usual pre-game attire ahead of Saturday night’s Patriots-Bills Wild Card game in Orchard Park. Cold? What cold? The Georgia native has never really been bothered by frigid conditions, which he makes clear whenever he takes the field for warmups in temps well below freezing. With less than two hours before kickoff on Saturday, a sleeveless Andrews took the field at Highmark Stadium to get warmed up. There probably wasn’t much warming up involved; it was...
NFL・1 DAY AGO
Sportsnaut

Tonight is a chance to embrace the new New England

The New England Patriots are taking on the Buffalo Bills Saturday night with a chance to officially forge their post-Tom Brady identity going forward.
NFL・1 DAY AGO
CBS Boston

Hurley: For The Patriots … That Was Embarrassing

By Michael Hurley, CBS Boston BOSTON (CBS) — Things change quickly in the NFL. But not like this. When the Patriots visited the Bills a little over a month ago, they bullied the home team so badly that local reporters were left to ask veteran defensive leaders if they were embarrassed by what had just happened. This time around, the story was flipped completely. Only this time, the Patriots didn’t face any questions about being embarrassed. Because it didn’t need to be asked. Longtime captain and three-time Super Bowl champion Devin McCourty volunteered that description on his own. Devin McCourty: “Embarrassing.” pic.twitter.com/vW01J1dQ0j — Andrew Callahan (@_AndrewCallahan) January 16,...
NFL・23 HOURS AGO
CBS Boston

FOXBORO (CBS) — The Patriots will be a bit shorthanded along the offensive line when they take on the Buffalo Bills in the AFC Wild Card Round on Saturday night. Left tackle Isaiah Wynn has been downgraded to out for the contest. Wynn was questionable for Week 18’s regular season finale in Miami with a hip injury, and had to leave that game after just nine snaps with an ankle injury. Wynn played in 16 games this season, starting 15 of them, and was on the field for 88 percent of New England’s offensive snaps. He was replaced by Justin Herron at...
NFL・2 DAYS AGO