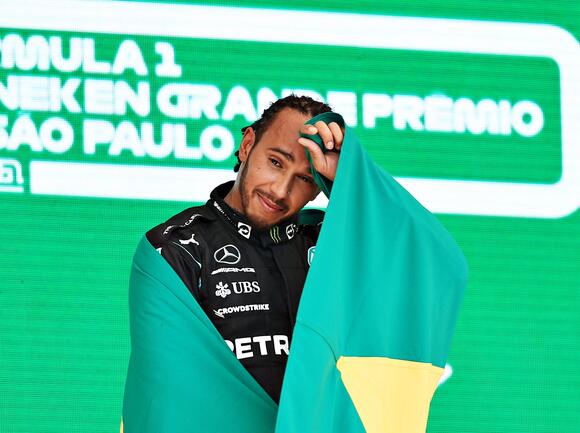 Lewis Hamilton has been defended by Charles Leclerc with the Ferrari driver adamant it was not solely an excellent Mercedes that prompted two inspiring comebacks at the Brazilian Grand Prix for the Briton last weekend.

The seven-time World Champion produced one of his finest victories in a glittering career at Interlagos .

It was a comfortable P1 for Hamilton in traditional qualifying on Friday, while he was also too good in the sprint on Saturday, shifting from P20 to P5 in just 24 laps following his position at the back due to a technical infringement.

But Hamilton saved the best until last on Sunday, moving his way up from P10 following a grid penalty to pass title rival Max Verstappen with 11 laps to go and seize victory.

The fresh engine clearly led to a significant advantage for Hamilton over his rivals, but Leclerc insists it was not purely machinery that led to victory.

“I don’t agree,” said the Ferrari driver. “Obviously Lewis has a very strong car at the moment, but I think he managed to go beyond what that car could give.”

While fellow Ferrari driver Carlos Sainz also offered Hamilton praise, but insisted the combination was a true reflection of the result.

“Yes, I saw this debate all over social media today,” added the Spaniard.

“Why don’t we talk about a combination of both? A great driver, an enormously talented driver, with a car that was really dominant this weekend.”

Lewis Hamilton was surprisingly advised to move to Red Bull

The 2021 season saw the 7 times world champion Lewis Hamilton missing out the chance add one more world title to his cabinet as Red Bull Max Verstappen secured the title for himself in the controversial last lap of season finisher in Abu Dhabi GP. Team Mercedes and Lewis Hamilton was in utter-disbelief for the result which they deem unfair and disappointed Lewis Hamilton kept a law profile away from limelight stirring retirement rumors.
MOTORSPORTS・1 DAY AGO
The US Sun

WORLD champions Mercedes have announced February 18 as the date for the launch of their car for the upcoming 2022 season. And the team, led by Toto Wolff, will reveal the car that they hope will challenge for the title during the 2022 F1 season again in a month's time - and Lewis Hamilton WILL be there.
MOTORSPORTS・17 HOURS AGO
firstsportz.com

Roman Grosjean the former Hass Formula1 driver has recently given his opinion on the drama of the Abu Dhabi Grand Prix of the 2021 Formula1 season. It has been stated in Essentiallysports that as per Roman Grosjean, Max Verstappen deserved to win the 2021 Formula1 title given what transpired throughout the season.
MOTORSPORTS・22 HOURS AGO
The Independent

Lewis Hamilton’s Formula One future should not be taken for granted, Zak Brown has insisted – with the McLaren boss admitting he would not be surprised if the seven-time world champion sensationally quits.More than a month on from the controversial conclusion to the Abu Dhabi Grand Prix which denied Hamilton a record eighth title, the Mercedes driver is said to be debating whether to return to the grid in 2022.Hamilton has been conspicuous by his absence from social media in the weeks since the debacle in the desert.An FIA inquiry was launched last week, but the governing body’s findings...
MOTORSPORTS・9 HOURS AGO

The Formula 1 off season rumbles on with the aftermath of Abu Dhabi still an intense topic in F1 circles, not to mention the link between that and Lewis Hamilton’s future. The seven-time world champion appears to be switching off after the bitter ending to the 2021 season as Max Verstappen stole a maiden world title following a thrilling final lap.But there is also much to debate and discuss surrounding both new rules for the upcoming season, as well as uncertainty surrounding who will line up on the grid.Another trend is how Mercedes, Toto Wolff and the FIA mend...
MOTORSPORTS・16 HOURS AGO
The US Sun

LEWIS HAMILTON may have lost last year's F1 title in controversial circumstances, but this time he'll be gunning to get his gong back. Max Verstappen picked up his maiden championship in the final race of the season at the Abu Dhabi Grand Prix in December. The new season is upon...
MOTORSPORTS・17 HOURS AGO
SkySports

The team will officially unveil the W13 in a "special digital launch event" at Silverstone, and say both drivers will conduct virtual media interviews before the new car is put through a shakedown programme at the circuit. That means it should be the first official day as team-mates for Briton's...
MOTORSPORTS・20 HOURS AGO
The Independent

Novak Djokovic was greeted by supporters when he arrived home in Serbia on Monday but another obstacle has been put in his path in the form of a tightening of regulations in France towards the unvaccinated.The first day of play at the Australian Open was overshadowed by the fallout from the government’s ultimately successful efforts to deport Djokovic ahead of the tournament because of his perceived threat to public health and order.The world number one left Melbourne on Sunday evening having said in a statement following the verdict of the Federal Court that he would take some time “to rest...
TENNIS・1 DAY AGO

Wilmington, OHIO – A quiet Saturday in Southern, Ohio set the backdrop for Saturday’s feature classes in the Sanctuary arena. A crowd gathered to watch twenty-two athletic jumpers give it their all during this afternoon’s $10,000 Futures Prix and $30,000 Grand Prix classes. The $30,000 Grand Prix...
WILMINGTON, OH・2 DAYS AGO
Newsweek

Novak Djokovic's Exit Guarantees at Least $155,000 for One of These Tennis Players

An American could now advance to the third round at the Australian Open in what seemed to be Djokovic's easy path.
TENNIS・2 DAYS AGO
Los Angeles Times

The Australian Open was great before Novak Djokovic, and the Grand Slam doesn't need the unvaccinated star to prove its place in the tennis world.
TENNIS・2 DAYS AGO
AFP

Five men to watch at the Australian Open

The absence of nine-time champion Novak Djokovic, deported in humiliation after a visa saga and courtroom drama, leaves the Australian Open men's draw wide open. But the 13-time French Open champion swept through the field last week to win a warm-up event at Melbourne Park, and a revitalised Nadal could lift what would be only his second Australian Open trophy after his lone win in 2009.
TENNIS・2 DAYS AGO

Novak Djokovic has never hidden his craving to be remembered as the greatest men's tennis player of all time, but his chance to make Grand Slam history is over for now -- and perhaps indefinitely. "If he wants to continue to focus on tennis, he has to make some changes.
TENNIS・2 DAYS AGO
AFP

Novak Djokovic grew up with NATO bombs raining down on Serbia but emerged to become one of the greatest tennis players of all time. A judge overturned that, but the government then tore up Djokovic's visa for a second time, triggering Sunday's court hearing, which the tennis ace lost.
TENNIS・2 DAYS AGO
TheAtlantaVoice

MELBOURNE, Australia (AP) — The first test of Naomi Osaka’s new approach to tennis might have been when she completely whiffed an overhead to give her opponent a break point on Day 1 of the no-Novak-Djokovic Australian Open. Osaka didn’t chuck her racket. She didn’t roll her eyes. She smiled. “There are situations where I […] The post Osaka, Nadal advance in Australia after Djokovic flies home appeared first on The Atlanta Voice.
TENNIS・1 DAY AGO
Insider

Djokovic has been banned from Australia for three years and may also not be able to play in France, paving the way for Rafael Nadal to dominate.
TENNIS・1 DAY AGO
The Independent

Sir Andy Murray has reacted after apparently being booed at the Australian Open following his first round victory over Georgian 21st seed Nikoloz Basilashvili.The Scot, 34, eventually saw off his opponent 6-1, 3-6, 6-4, 6-7, 6-4 in a tense five-set match at the John Cain Arena, having coasted early on before finding things tougher as the momentum swung back towards Basilashvili.But during his post-match interview, an exhausted Murray appeared to be booed by fans in the stadium, a confusing development given that they had cheered and applauded when he won the match, celebrating wildly himself on the court and...
TENNIS・20 HOURS AGO
The Independent

Andy Murray focused on the future not the past after returning to the court where he was virtually retired three years ago for another epic Australian Open encounter.The great and the good of tennis were hastily gathered together to make a tribute video for Murray in 2019 after he tearfully laid bare the extent of his hip problems on the eve of the tournament and announced he was considering retiring.But, even as the video was playing, Murray, who had somehow defied the pain to push Roberto Bautista Agut to five sets in a raucous atmosphere, was looking ahead to...
TENNIS・19 HOURS AGO
AFP

Medvedev eases into second round to begin title charge

Title favourite Daniil Medvedev wore down Swiss Henri Laaksonen to win his opening match at the Australian Open on Tuesday with little fuss. The Russian, who is looking for back-to-back Grand Slam crowns after winning last year's US Open, prevailed 6-1, 6-4, 7-6 (7/3) in 1hr 54min on Rod Laver Arena. "I tried to win the third set, I thought I'll wait (for the tiebreaker), it managed to work out, so I'm really happy about it," the world number two said on court. "I started well in Australia last year, won the ATP Cup and managed to be in the final here. I like to play here, I like hardcourts and I want to do better than I did last year."
TENNIS・1 DAY AGO
The Independent

Novak Djokovic was still on his way home from Australia when another obstacle was put in his path in the form of a tightening of regulations in France towards the unvaccinated.The first day of play at the Australian Open was overshadowed by the fallout from the government’s ultimately successful efforts to deport Djokovic ahead of the tournament because of his perceived threat to public health and order.The world number one arrived in Dubai on Monday morning on his way to Serbia having said in a statement following the verdict of the Federal Court that he would take some time “to...
TENNIS・2 DAYS AGO