Artificial Intelligence and Bias: What One Investor Considers 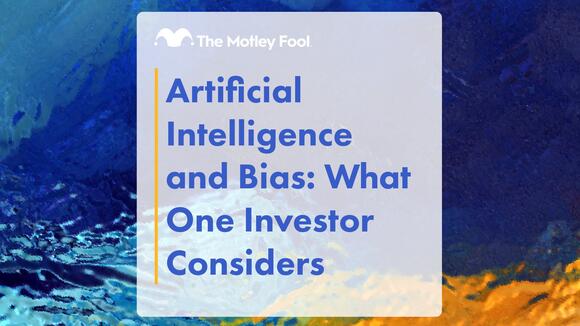 It's no secret that technology often moves much faster than the laws and regulations designed to protect users and inhibit tech companies from broad overreaches of power. In this segment of Backstage Pass, recorded on Oct. 27, Fool contributors Rachel Warren, Brian Withers, and Trevor Jennewine answer a member's question about making investment choices in the artificial intelligence space that are not only sound from a financial perspective but address personal ethical concerns.

Rachel Warren: I just checked the Slido real quick. We had a comment/question from ProShopGuy, the creation of internet and mobile phones created a social media genie. I agree. It is out of a bottle and regulators are slow to catch up on new technologies. I'm concerned about the ethical issues of the new technology artificial intelligence. Do we need to get ahead of this new technology? Do either of you guys have a comment on that one?

Brian Withers: Yeah. That's a tough thing about regulations, it has a difficult time keeping up with tech. My hope is that similar to my Spiderman quote for Facebook is, these other companies that are using AI to power their platform is that they have good intent, and Toby and I were talking about Progressive yesterday.

It was an interesting that if you use artificial intelligence to help set your rates for different risk scenarios, one of the scenarios that Toby brought up, which is really interesting, is he said, that people who park their cars on the street are more to likely to get their cars damaged by people driving by and hitting the mirror or theft or whatever.

But the people that park on the street are more likely to be lower-income, intercity, don't have the money to pay to put their cars in protected parking lots and whatnot.

It's a true fact that if you park your car on the street, you're more likely to file a claim. That's probably true. But does it discriminate in some way? These are not easy issues to solve, and so I hope that people can live up to their Spiderman mantra.

Trevor Jennewine: [laughs] I'll add onto that too. I think that you hit the nail on the head. From an investor's perspective, I like to see that the company does acknowledge the risks and then address it somehow. Upstart's using artificial intelligence and they've had the Consumer Financial Protection Bureau look at their models and they've received that no-action letter that basically says we don't see any bias here.

Lemonade has lots of blog posts talking about how it believes artificial intelligence actually eliminates bias rather than working bias into the equation. But I do, absolutely, Brian, made a great point and it is. I think technology moves faster than legislation does. I think no matter what we do, we're going to get to a point where the AI is further ahead of the law or rules and regulations, and there's going to be a catch-up period. Hopefully, we don't end up with anything like Skynet when that happens.

A little money can go a long way after stocks and crypto have corrected sharply in recent days.
STOCKS・23 HOURS AGO
The Motley Fool

Let's look at the investment merits, if any, of this popular meme token.
STOCKS・4 HOURS AGO

Sea Limited's stock has great prospects, but investors should not neglect the potential downsides.
STOCKS・3 HOURS AGO
The Motley Fool

Meta Platforms expects to have the fastest supercomputer.
COMPUTERS・4 HOURS AGO
The Motley Fool

FTC Pressure May Kibosh the Biggest Semiconductor Deal in History, Lockheed Martin Up Next

Defense contractor Lockheed Martin is not used to being in the crosshairs — normally, its job is to make the crosshairs. On Tuesday, all that...
BUSINESS・14 HOURS AGO
The Motley Fool

Missed Out on Salesforce? My Best Enterprise Software Stock to Buy and Hold

The next big business software provider has emerged.
SOFTWARE・2 HOURS AGO
The Motley Fool

Aim for cheap and diverse.
MARKETS・1 HOUR AGO
The Motley Fool

Microsoft Earnings Highlight the Powerhouse the Company Has Become

The software giant is still delivering rapid revenue and earnings growth for investors -- and more of this is likely on the way.
STOCKS・4 HOURS AGO
24/7 Wall St.

Here's a look at what the ARK Invest exchange-traded funds sold on January 24, 2022.
STOCKS・1 DAY AGO
AFP

Microsoft beat market expectations Tuesday with strong quarterly performance in cloud computing and software, still benefitting from the pandemic's online shifting of work, play, shopping and learning. Ives saw the strong earnings from Microsoft as an "broader indication of strength we expect to see across the enterprise cloud software landscape throughout this earnings season."
TECHNOLOGY・14 HOURS AGO
The Motley Fool

Appian Takes The Next Step in Its Low-Code Evolution

These cryptos could help you cash in on the booming popularity of non-fungible tokens.
BUSINESS・4 HOURS AGO
The Motley Fool

Is Palantir the AWS of Data Analytics?

Palantir is borrowing a page from Amazon's blueprint as it looks to penetrate the private sector.
TECHNOLOGY・3 HOURS AGO
The Motley Fool

Which tech giant can better serve investors hoping to benefit from the growth of the metaverse?
ECONOMY・2 HOURS AGO
The Motley Fool

The S&P 500 may be overdue for a pullback this year.
STOCKS・2 HOURS AGO
Forbes

Founder and CEO of FortySeven Software Professionals, with over a decade of experience advising F500 companies and growth-stage startups. Artificial intelligence (AI) is gaining a lot of traction lately. Apparently, the majority of AI services and products will be in high demand for the next few years. According to Gartner, worldwide AI software revenue is forecast to total $62.5 billion in 2022, and one-third of organizations with AI technology plans said they would invest $1 million or more in the next two years.
SOFTWARE・1 DAY AGO
The Motley Fool

3 Reasons Metaverse Real Estate in Decentraland Is a Good Investment

Decentraland shows signs of long-term viability, allowing real estate investors to buy with confidence. Here's what it can offer.
REAL ESTATE・1 DAY AGO