Sixers split on how to approach Ben Simmons situation?

Kyle Neubeck: On broadcast just now, @KristenLedlow just said feedback from people she talked to within Sixers is split on Simmons approach. One, she said, believes they should welcome him back and he makes them better. “Another tells me, ‘We got to cut the cord and move forward.'”

If the right offer doesn’t come, could Ben Simmons still be on this roster at playoff time? | Sixers Mailbag inquirer.com/sixers/sixers-… via @phillyinquirer – 4:36 PM

LOVED catching up with @Sarah Todd on today’s pod!

We talk about her days covering the #Sixers & whether she’s surprised by what’s going on with Ben Simmons.

Plus, she tells us everything we need to know about The #Jazz heading into tonight’s matchup!

If the right offer doesn’t come, could Ben Simmons still be on this roster at playoff time? | #Sixers Mailbag inquirer.com/sixers/sixers-… via @phillyinquirer – 9:52 AM

NEW @TheCrossover Pod w/@Howard Beck: Surging Wizards, the latest with Ben Simmons, the NBA’s indifference towards John Wall and are the Cavs … good? Links: bit.ly/2w1G5e2 – 9:21 AM 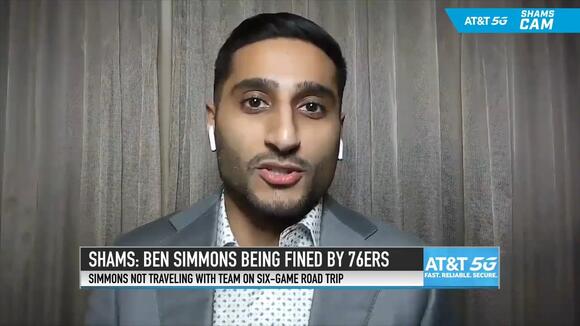 On today’s episode of The Bell Ringer, I welcome @NBAKrell on with me to discuss Tyrese Maxey, Ben Simmons, and the new additions #Sixers sixerswire.usatoday.com/2021/11/15/bel… via @SixersWire #NBA – 8:02 PM

Danny Green (left hamstring tightness) is listed as out for Sixers-Jazz tomorrow night.

The Adele special (and her connection to Ben Simmons) got me to thinking about what’s missing from the Simmons get-out-of-Philly playbook: shows.acast.com/bucher-and-fri… via @acast – 4:07 PM

How Ben Simmons Can Get His Wish shows.acast.com/bucher-and-fri… via @acast – 4:37 AM

A Ben Simmons return would be an ‘adjustment’ and a test of #Sixers’ team chemistry inquirer.com/sixers/ben-sim… via @phillyinquirer – 11:17 PM

“Ben Simmons has to take a page out of [Giannis Antetokounmpo’s] book.”

Scottie Pippen shares how much he admires the Greek Freak for persevering through adversity.

Our Town Hall with Scottie Pippen is available NOW on the SXM App!

A Ben Simmons return would be an ‘adjustment’ and a test of Sixers’ team chemistry inquirer.com/sixers/ben-sim… via @phillyinquirer – 12:39 PM

A return of Ben Simmons with the wrong midset could destroy the team chemistry the Sixers boast about inquirer.com/sixers/ben-sim… via @phillyinquirer – 6:41 AM

A return of Ben Simmons with the wrong midset will destroy the team chemistry the #Sixers boast about inquirer.com/sixers/ben-sim… via @phillyinquirer – 5:06 AM

Scotto: Over the years, anytime I talked to people either around them or the league, it seemed like they coexisted, but they certainly weren’t close. Pompey: I don’t think it was any different than most top two or three draft picks who were franchise players trying to coexist earlier in their careers. They had distinct personalities. Joel was more of a homebody. Ben is more of a guy, who’s a tall, good-looking dude, who dresses well, all the women love him, and he likes going out and having a good time. That factored into it as well. It’s no different than most teams when two guys want to be the man. -via HoopsHype / November 17, 2021

A sports fan who phoned into a Philadelphia radio station was so focused on complaining about estranged 76ers star Ben Simmons that he shrugged off getting hit by a car while on the air. (Hear the audio below.) “James” was patched through when he was asked, “What’s on your mind?” “Uh, nothing, someone just hit my car,” he replied. The incredulous Angelo Cataldi and the Morning Team on 94WIP wanted confirmation that the caller had been in an accident. “Yeah, and they’re driving off,” James said. “It’s OK.” The hosts encouraged James to get a license plate number while James let them know the other driver “swerved into my lane.” “Anyway, I’m calling about Ben Simmons,” he said, unperturbed. “You just got in a car accident and you’re calling about Ben Simmons?” “Yeah,” James replied, “because he annoys me more than someone hitting my car and driving off.” -via HuffPost / November 17, 2021

The tense situation between All-Star Ben Simmons and the Philadelphia 76ers has continued, with the team fining Simmons for not traveling with the team on its current road trip, sources told The Athletic. Simmons has not played this season, citing not being mentally ready to compete after spending the offseason hoping to be traded. -via The Athletic / November 16, 2021

The NBA trade rumors on the Ben Simmons front are making loud noises again. According to Shams Charania of The Athletic, the Philadelphia 76ers are willing to wait out a Simmons trade with Brooklyn Nets star James Harden on their mind. But in terms of inquiring with the Sixers about Simmons, the Nets are behind the Sacramento Kings and the Atlanta Hawks, per Charania.
NBA・1 DAY AGO
All Hawks

The NBA trade deadline is drawing closer and the Philadelphia 76ers are reportedly no closer to a Ben Simmons trade,
NBA・1 DAY AGO
USA TODAY

NBA trade rumors: Which top targets could push contenders over the top to a championship?

With NBA championship race wide open, the right trade could be a big factor in pushing one of the contenders to a title.
NBA・10 HOURS AGO

The Philadelphia 76ers still need to make a move involving NBA All-Star Ben Simmons as the trade deadline approaches. There’s a growing chance that nothing ends up getting done until the offseason, however. It’s clear the Sixers have high aspirations when it comes to the main player they receive...
NBA・1 DAY AGO
ClutchPoints

The Philadelphia 76ers are reportedly interested in acquiring James Harden from the Brooklyn Nets, according to multiple sources. According to the latest reports, Harden will be moved to the Sixers in exchange for Ben Simmons. It’s a risky move for the Nets to trade him for Simmons, but if Philadelphia can pull it off, they’ll be well on their way to possibly winning an NBA title. Ben Simmons and Joel Embiid are clearly not a good fit for one other, as seen by their postseason performance last season. Bringing in someone like Harden next to Embiid would be nearly unstoppable.
NBA・1 DAY AGO
94 WIP Sports Radio

Report: 76ers prefer to pursue superstar player like Harden in offseason than to trade Simmons now

The Sacramento Kings and Atlanta Hawks are the most engaged teams in discussing a potential deal for Simmons, but neither team has met Daryl Morey’s threshold in terms of a the return for Simmons.
NBA・1 DAY AGO
NBA Analysis Network

The NBA trade deadline is just about two weeks away and the Philadelphia 76ers continue to be the main talking point in trade discussions around the league, specifically because of the situation at hand with Ben Simmons. Ever since the 76ers lost to the Atlanta Hawks in the Eastern Conference...
NBA・1 DAY AGO

James Harden reportedly intends to become an unrestricted free-agent this offseason for the first time in his career with the plan to “explore other opportunities.”
NBA・12 HOURS AGO
Yardbarker

Ben Simmons and the Philadelphia 76ers have been locked in a vicious stalemate since the end of last season. Nothing has changed either party’s desire to stay the course. The Sixers refuse to give Simmons up unless they get their desired asking price. Simmons refuses to play for the...
NBA・1 DAY AGO
ClutchPoints

The perfect trade Hornets must offer to Sixers for Ben Simmons

The Philadelphia 76ers have made it apparent that they are willing to trade Ben Simmons, with the Charlotte Hornets reportedly being one of the new teams interested. Ben Simmons on the Hornets would make sense since they could use a defensive-minded player, and given their size issues, he may be the ideal fit. They’re also a team that enjoys shooting the three-point shot, and Simmons is an outstanding facilitator, so it makes sense on both sides of the ball.
NBA・1 DAY AGO
USA TODAY Sports Media Group

Steve Nash on James Harden rumors: I'm not sure of validity of the reports

Kristian Winfield: Steve Nash said he just heard about the James Harden reports: “James and I speak all the time, we have a great relationship, so I’m not sure the validity of the reports.”. Source: Twitter @Krisplashed. What’s the buzz on Twitter?. Nick Friedell @NickFriedell. Harden: “Of...
NBA・4 HOURS AGO

The Philadelphia 76ers have continued to be patient with the Ben Simmons saga, and president of basketball operations Daryl Morey maintains he is in no rush to move the star point guard. That may be because he wants to acquire one specific player via a Simmons trade. Shams Charania and...
NBA・1 DAY AGO
USA TODAY Sports Media Group

Last week, the Atlanta Hawks considered sending John Collins, Cam Reddish, and a first-round pick to the Sixers in exchange for Simmons, according to sources. However, the talks stopped after Harris’ name was brought into the deal. “There’s no way that kind of deal is going to happen,” a source said. “There’s maybe one [team] on a stretch that can take back Tobias. But I just think it’s a long shot.”
NBA・1 DAY AGO
phillysportsnetwork.com

Opinion: The Sixers Need to Wake Up and Trade Ben Simmons

At a time when the city of Philadelphia has inept management through all of its major sports teams, the Sixers could jump over them all with one good move. Any move that gets Ben Simmons out of Philadelphia would, realistically, be a good movie, but I understand that we’re not looking for a trade value of pennies on the dollar for Simmons.
NBA・11 HOURS AGO
FastBreak on FanNation

Patrick Beverley has been ruled out for Sunday night's game between the Brooklyn Nets and Minnesota Timberwolves.
NBA・2 DAYS AGO
ClutchPoints

The Phoenix Suns are steamrolling the NBA once again. They became the first team to win 30 games this season due to their elite offense and even better defense. It’s not a matter of if, but who on Phoenix’s roster gets named an All-Star. Devin Booker has been...
PHOENIX, AZ・18 DAYS AGO
Sportsnaut

With the 2021-22 NBA season in full swing, basketball fans are putting on their jerseys and filling up arenas around
NBA・2 DAYS AGO
FastBreak on FanNation

Cam Reddish is available to make his debut for the New York Knicks on Sunday against the Los Angeles Clippers.
NBA・2 DAYS AGO
Sportsnaut

The 2021-’22 NBA season is proving to be a massive disappointment for the Los Angeles Lakers. Between the Anthony Davis
NBA・14 HOURS AGO