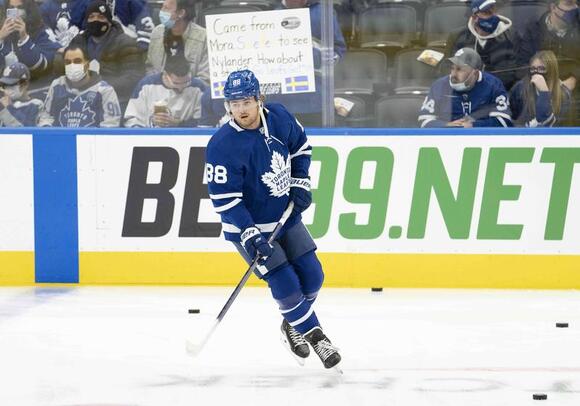 Jack Campbell earned his third shutout of the season, Auston Matthews and David Kampf each had a goal and an assist and the Toronto Maple Leafs beat the visiting Nashville Predators 3-0 on Tuesday night.

Campbell made 24 saves in his seventh career shutout as the Maple Leafs extended their winning streak to four games. They have won nine of their past 10.

Mitchell Marner added an empty-net goal for the Maple Leafs.

Juuse Saros stopped 31 shots for the Predators, who had a three-game winning streak end.

Toronto had a 13-8 advantage in shots on goal and led 1-0 after one period.

Matthews scored his seventh goal of the season at 7:37 on a power play, shooting from the left circle after taking a cross-ice pass from William Nylander. Morgan Rielly also earned an assist. Ryan Johansen was serving a crosschecking penalty.

Philip Tomasino had the two best scoring chances for Nashville in the first. He hit a goal post one minute into the game and lost control of the puck on a breakaway at 13:27 just after leaving the penalty box.

Nashville’s Matt Duchene hit the goal post with a shot 46 seconds into the second period. During a scramble around Nashville’s goal nearly four minutes later, Matthews hit the post and the puck trickled across the line without going in.

Saros continued his strong play in the second period. Toronto had a 25-16 advantage in shots on goal after two periods.

Nashville’s Thomas Novak hit a goalpost with a backhand shot at 4:49 of the third period.

Saros stopped Nylander on a breakaway at 5:55 of the third with the teams playing with four skaters aside. Duchene was foiled five minutes later on his backhand attempt.

Kampf scored his third goal of the season at 16:04 of the third on a pass from Ondrej Kase.

Marner completed the scoring at 19:37.

Toronto acquired forward Kyle Clifford from the St. Louis Blues on Tuesday in exchange for future considerations, but he did not play in the game.

The Toronto Maple Leafs are considered a deep team, but stats on paper don’t always show up on the ice. The rotating roster movements due to COVID protocols have exposed a rather concerning lack of effective players to utilize in the bottom six, especially on the fourth line. While Toronto continues to be one of the best teams, despite the lack of depth, this deficiency should be rectified before the playoffs.
NHL・2 DAYS AGO
Sportsnaut

Despite a slew of COVID-19 postponements, the interruptions have hardly stopped Auston Matthews’ ability to score goals — especially in
NHL・1 DAY AGO
Sportsnaut

The NHL season officially started back on October 12. In this article, we track all the NHL games today as
NFL・12 HOURS AGO
Sportsnaut

Islanders veteran Zdeno Chara dropped Flyers defenseman Zack McEwan with an uppercut to the face, then made sure to check if his opponent was OK.
NHL・6 HOURS AGO
Sportsnaut

Joonas Donskoi, who has yet to score a goal this season, netted the clincher in a shootout as the Seattle
NHL・1 DAY AGO
CBS Boston

BOSTON (CBS) — Brad Marchand’s star power was on full display last week, as the Bruins winger recorded at least two points in all four of Boston’s games. On Monday, the NHL honored him as the league’s First Star of the Week. Marchand dominated the ice last week, leading the NHL with six goals and 10 points in his four games — all Boston victories. The highlight of his week came in Boston’s 5-1 win over the Montreal Canadiens last Wednesday, when Marchand tallied his fifth career hat trick in the victory. Before that game, Marchand had a two-goal effort in a...
NHL・2 DAYS AGO
Sportsnaut

When Boston hosts the Carolina Hurricanes on Tuesday night, the Bruins will retire the No. 22 of Hall of Fame
NHL・2 DAYS AGO

After the first 20 minutes, it seemed as if the Vegas Golden Knights were going to coast to victory in
NHL・1 DAY AGO
WEEI Sports Radio

Carolina Hurricanes forward was asked on Tuesday if he sees similarities between himself and Boston Bruins star Brad Marchand. Marchand responded by saying that’s like “comparing a Lambo to a Prius.”
NHL・1 DAY AGO
USA TODAY

The Florida Panthers are breathing rarefied air as they take their show on the road. Heading into Tuesday’s clash with
NHL・2 DAYS AGO
CharlotteObserver.com

None of the kids recognized the elderly man when he first entered Raleigh’s Chavis Community Center in November 1999. A hockey player? He didn’t look like a hockey player. Certainly not like the hockey players the kids might have seen with the Carolina Hurricanes — or on TV.
NHL・1 DAY AGO
KREX

While their struggles on the road continue, the Dallas Stars will try to maintain their dominance on home ice when
NHL・1 DAY AGO