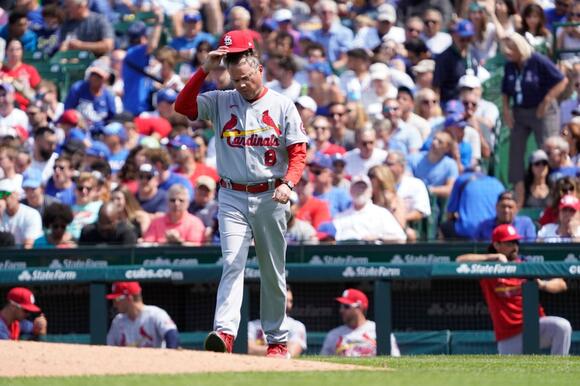 ST. LOUIS–Only a few weeks after the Cardinals surprised the baseball world and their manager by dismissing the man who took the team to the playoffs in each of his full three seasons at the helm, Mike Shildt told a national television audience Tuesday his dismissal hit him ‘right between the eyes.”

Shildt’s comments on the MLB Network came as the National League announced its Manager of the Year. Shildt finished a distant third to the winner, San Francisco’s Gabe Kapler and the second-place finisher, Milwaukee’s Craig Counsell. He received one first place vote, three second place votes and eleven third place votes, for a total of 25.

In a brief interview before the winner was revealed, Shildt talked about the opportunity to act as a steward of the Cardinals’ legacy, in much the same way he did in a brief Zoom statement October 18, days after team officials cited philosophical differences for his dismissal. Shildt’s bench coach, Oliver Marmol, was named as his successor.

“There’s some pain I’ve got to work through and I am doing that,” Shildt said Tuesday night. “I’m a spiritual guy, faith-based. God didn’t want me to be there anymore and he’s gonna put me in a place where he wants me and I trust that.”

The New York Mets and the Oakland A’s are the only current Major League teams with managerial openings.

“I’ll land on my feet somewhere that makes sense and better days are still ahead.”

ST. LOUIS (KTVI)–Saturday morning should have been the first day of the annual Winter Warm-Up, a staple of the baseball offseason in St. Louis where fans reconnect with the Cardinals, meeting current and former players and coaches, building excitement for the 2022 season. Thanks to the ongoing labor lockout, the Warm-Up was canceled. But all […]
SAINT LOUIS, MO・8 DAYS AGO
FOX 2

The NFL and the Rams settled a lawsuit regarding the team's move from St. Louis for $790 million in November.
NFL・2 DAYS AGO
97.3 The Fan

The Padres have announced their 2022 Player Development staff. There are familiar names returning to the staff, including Moises Alou, A.J. Ellis, Glenn Hoffman, & Trevor Hoffman. Joining the staff in 2022 is former Cardinals manager Mike Shildt.
MLB・1 DAY AGO
The Spun

Back in October, the St. Louis Cardinals announced that Mike Shildt would not return as their manager for the 2022 season. Fast forward a few months later, and Shildt has landed a new gig. Shildt has been hired as a player development consultant for the San Diego Padres. He was...
SAN DIEGO, CA・1 DAY AGO

An organization looking to build on past momentum and some of its young, electric talent has turned to a former Cardinals lifer for insight on player development. Mike Shildt, the Cardinals' manager the previous three full seasons before his sudden, jarring dismissal at the end of the 2021 season, has accepted a part-time role that will put him back on the field near his roots serving as a player development consultant with the San Diego Padres. The team introduced Shildt and his new role in the announcement of the player development staff for 2022.
MLB・1 DAY AGO
FanSided

The Cardinals fired Mike Shildt earlier this offseason, citing philosophical disagreements. Now, Shildt has an opportunity at revenge. Shildt has a new gig as a consultant for player development in the San Diego Padres organization. It’s a natural fit for Shildt, who made his way up the ranks in St. Louis before being let go a few months ago.
MLB・21 HOURS AGO
USA TODAY

"You can make a case that he's the best player to ever play," Jim Leyland said of Barry Bonds, whom he managed with the Pittsburgh Pirates.
MLB・1 DAY AGO
FanSided

Looking back on the St. Louis Cardinals’ decision to trade Luke Voit

The St. Louis Cardinals have traded away promising players to fill holes on the major league roster. How have they fared on other rosters?. Every team loves cheap, young talent, with a classic thumper at first base always being desirable. And if the kid is local, which enhances his marketability, all the better.
MLB・1 DAY AGO

Alex Rodriguez, a three-time MVP whose 696 home runs trail only Barry Bonds, Hank Aaron and Babe Ruth, received just 34.3% of the votes in his debut.
MLB・2 DAYS AGO
Audacy

David Ortiz needed just one swing to power his way into baseball’s Hall of Fame, narrowly punching his ticket to Cooperstown.
MLB・2 DAYS AGO
FanSided

Daniel Ponce de Leon, an intriguing former St. Louis Cardinals pitcher, has signed a minor-league deal with the Los Angeles Angels. Entering the regular season, Daniel Ponce de Leon was part of the St. Louis Cardinals rotation. Of course, part of that was because of injuries to Miles Mikolas and Kwang Hyun Kim, but there was optimism that the right-hander would pitch at a high level until each pitcher returned.
MLB・2 DAYS AGO

David Ortiz was voted into the Baseball Hall of Fame Tuesday, while Barry Bonds and Roger Clemens were shut out. That’s total insanity. They should all be in.
MLB・2 DAYS AGO
iheart.com

Ronnie & TKras w/ Zac Blobner This Morning: The Bucs have a lot on their plate to deal with, despite being out of the NFL Playoffs after losing to the Rams last Sunday. From Tom Brady on Instagram saying "Thank You", to OC Byron Leftwich unofficially heading to Jacksonville to coach the Jags, to Antonio Brown going on HBO and threatening to sue the team... it's, A LOT. Bucs Radio Voice Dave Moore & Pewter Report's Jon Ledyard help us break it all down, oh AND Saints HC Sean Payton stepping away from New Orleans in there too. Plus, the Bolts back home vs the Devils tomorrow, as Bally Sports Lightning TV Voice Dave Randorf calls the show w/ a bone to pick about Jon Cooper getting shafted by the NHL. Zac handles What's Up Tampa Bay w/ Wacky Turtle News & a game of Would You Rather on the MLB Hall of Fame ONLY inducting Red Sox Legend David Ortiz while shelving Barry Bonds' chances for the final time...
NFL・2 DAYS AGO
92.9 The Game

Will the Atlanta Braves be able to sign Freddie Freeman? Will Major League Baseball play 162 games this year? What is the big hold up in the MLB negotiations?
MLB・2 DAYS AGO
93.7 The Fan

Just under 24 hours after the National Baseball Hall of Fame announced that Boston Red Sox legend David Ortiz will be the only new inductee, a lot of conversation was made regarding the fate of a few players.
MLB・1 DAY AGO
Audacy

MLB Network’s Rob Parker did not vote for David Ortiz citing a gray area with PEDs, but he voted for Barry Bonds, Roger Clemens and Sammy Sosa, leading to one of his colleagues to call him out.
MLB・2 DAYS AGO
Inside The Dodgers

There is a lot of debate among Dodgers fans of all eras about who the best pitcher in team history is. Who is the greatest Dodger pitcher between Sandy Koufax and Clayton Kershaw?  We can kick things off with Sandy Koufax. When he was at his best, Sandy Koufax was nearly untouchable with his ...
MLB・2 DAYS AGO
USA TODAY

After falling short in their final year on writers' ballot, Bonds, Clemens are eligible for consideration by Hall of Fame's Today's Game Committee.
MLB・2 DAYS AGO
NewsOne

Willie Mays has repeatedly called for Barry Bonds' induction into the baseball Hall of Fame. Now, the home run king is effectively shut out from inclusion in what many consider to be baseball's greatest honor.
MLB・2 DAYS AGO