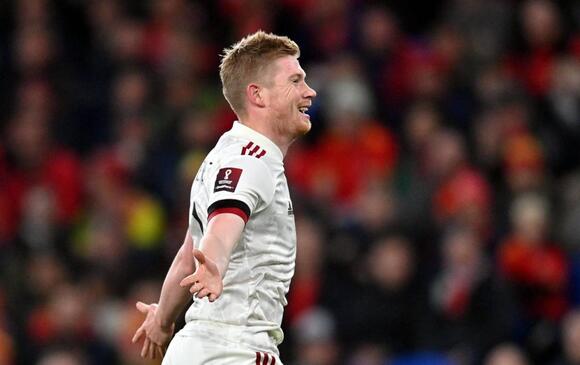 The final international break of 2021 is over, and the boys in blue will be returning to the CFA shortly to reconvene and make a collective push through this tough winter schedule.

In the final night of action, Kevin De Bruyne, Oleksandr Zinchenko, and Riyad Mahrez were the standouts, with the trio finding the back of the net for their respective countries in some World Cup qualification action.

Here's everything that happened across Tuesday from an individual statistics perspective:

"I Think It Would Be Valid to Pick Them Both." - Gabriel Jesus Delivers His Verdict on Who is Man City's Fastest Player

The Algeria superstar was disappointingly knocked out of the Africa Cup of Nations in the group stage on Thursday night, courtesy of a 3-1 defeat against Ivory Coast on matchday three. The defending Africa Cup of Nations champions failed to win a game across three fixtures, and Mahrez - who...
PREMIER LEAGUE・2 DAYS AGO
The Guardian

The City Football Group-owned clubs have proved to be a temporary home for several developing prospects at Manchester City, such as the likes of Pablo Maffeo, Marlos Moreno and Yan Couto in the recent past. With the umbrella company holding stakes in nine different clubs in different leagues around the...
PREMIER LEAGUE・2 DAYS AGO

This season, Phil Foden's performances have continued to hit the staggering heights that saw him emerge from the Manchester City academy at just 17 years of age. The Stockport-born midfielder is one of the first names on Pep Guardiola's teamsheet at the moment, with his technical quality pinpointed as the reason he continues to be deployed in the false nine role.
PREMIER LEAGUE・2 DAYS AGO
CityXtra

With the success of Pep Guardiola's false nine system this season, it would be easy to forget Manchester City are in the race for a clinical striker this summer. Sergio Agüero's constant knee troubles combined with Gabriel Jesus' position change allowed the Catalan trial a number of different players in the role - including Kevin De Bruyne, Raheem Sterling, and Phil Foden.
PREMIER LEAGUE・1 DAY AGO
CityXtra

"The Agüero Regen!", "One of the Best Under the Radar Signings Ever" - Plenty of Man City Fans React to Strong Transfer Links With 19-Goal Striker

The twists and turns of Manchester City's pursuit of a Sergio Agüero replacement seem to have added yet another surprise into the mix. After spending a whole summer trying to sign Tottenham Hotspur's Harry Kane, City's focus had reportedly switched to either Borussia Dortmund's goal-machine, Erling Haaland, or the emerging Fiorentina superstar, Dusan Vlahovic.
PREMIER LEAGUE・1 DAY AGO
CityXtra

FIFA have named the world XI of the best players in the world over the past year picked by fans across the globe, with five Premier League players making the star-studded lineup, as confirmed on Thursday. Kevin De Bruyne has been named as part of a three-man midfield alongside Chelsea...
PREMIER LEAGUE・1 DAY AGO

Raheem Sterling Would Have Been 'Open' to Barcelona Loan Switch, Reveals New Report

With Raheem Sterling’s current Etihad Stadium contract set to run out in the summer of 2023, speculation about a potential move away from Manchester City has continued to rumble on. One of the reported destinations included was a possible move to Spanish giants Barcelona. As per a new report...
PREMIER LEAGUE・1 DAY AGO
Yardbarker

The Latest on Riyad Mahrez, Nathan Ake, Tino Livramento and the Complete Team News Ahead of Southampton vs Man City (Premier League)

Kevin De Bruyne's strike on the 70th minute extended City's lead at the top of the Premier League, as the Blues secured a hard-fought 1-0 victory against Chelsea at the Etihad Stadium last weekend. Pep Guardiola's side will conclude a hectic start to the year away to Southampton on Saturday,...
PREMIER LEAGUE・1 DAY AGO
CityXtra

On Friday, numerous reports from South America stated that Manchester City were in talks to sign Julián Álvarez - one of Argentina's hottest prospects, with one journalist reporting that a deal was "about to close" for the player to move to England. The 21 year-old was named South...
PREMIER LEAGUE・1 DAY AGO
CityXtra

The England international is currently enjoying his best run of form for the Premier League champions in over a year, after what has been a difficult period on the pitch at the Etihad club for the London-born star. The 27 year-old lost his place in the starting XI halfway through...
PREMIER LEAGUE・1 DAY AGO

As several of the world's leading companies, football brands, and clubs announce their respective awards and rankings for the year of 2021, the number one football video game has now released their world XI from the last 12 months. After a round of voting from millions of players of FIFA...
PREMIER LEAGUE・2 DAYS AGO
CityXtra

There is a strong argument to suggest that Kyle Walker has been the most consistent player in the Pep Guardiola era, since his big money move from Tottenham in the summer of 2017. The England international right-back is set for his 126th start in the Premier League against Southampton on...
PREMIER LEAGUE・7 HOURS AGO
CityXtra

In terms of potential, James McAtee is one of the best up and coming English prospects at present. Current pundit and former player Robbie Savage echoes the aforementioned statement, previously singling out the 19-year old to be the next breakout young star to emerge from a Premier League club. Manchester...
PREMIER LEAGUE・2 DAYS AGO
CityXtra

The Spain international defender was seemingly at the centre of everything on Saturday night, as Manchester City battled to a hard-fought 1-1 draw at St Mary's - retaining an unbeaten run in the Premier League. Aymeric Laporte was key in ensuring that Manchester City's tally of goals conceded against Southampton...
PREMIER LEAGUE・1 HOUR AGO
CityXtra

One of the most underrated aspects of Pep Guardiola's tenure as Manchester City manager is his ability to deal with key absences and maintain unprecedented success. His domination of the Premier League is no fluke. When Manchester City were without key left-backs in the 2017/18 season, the Catalan converted central midfielder Fabian Delph into one of the best-inverted full-backs in the league.
PREMIER LEAGUE・1 DAY AGO
CityXtra

Raheem Sterling has cemented his reputation as one of the most key players for Manchester City and England in recent years, with the London-born attacker having established his status as one of the deadliest wingers in world football. The 27-year-old has developed into the embodiment of the modern-day winger since...
PREMIER LEAGUE・1 DAY AGO
CityXtra

Reports are continuing to flood in regarding Manchester City's apparent pursuit of River Plate striker, Julian Alvarez. Earlier today, Hernan Castillo, a local journalist, reported Manchester City were 'about to close' a deal to sign the talented youngster - with various TyC Sports journalists confirming that information. It went a...
PREMIER LEAGUE・1 DAY AGO
Yardbarker

Riyad Mahrez's desire to avoid a premature return to Manchester could not be fulfilled as Algeria suffered their third group-stage loss to surrender their Africa Cup of Nations crown after a disappointing tournament for Djamel Belmadi's side. While Manchester City have not overly missed the former Leicester man in their...
PREMIER LEAGUE・2 DAYS AGO