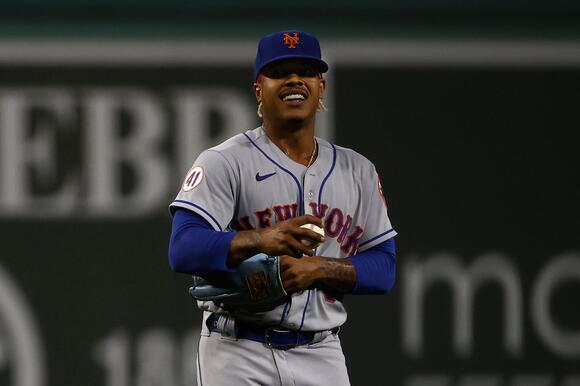 Marcus Stroman couldn’t have made it much more clear that he won’t be signing with the Yankees this offseason.

The free agent pitcher, in a series of tweets, shut down any chance of pitching in pinstripes after one Twitter user sparked the discussion with a photoshop of Stroman in a Yankee uniform.

Stroman’s response? The highly-used GIF of 50 Cent laughing and driving away from Turtle in the HBO show Entourage, clearly insinuating that the idea of Stroman pitching in the Bronx was a laughable one.

But Stroman didn’t stop there, clapping back at Yankee fans who flocked in to stand up for their favorite team.

“You mad because that crazy payroll continues to let you down year after year?” Stroman tweeted. “Get off my page and go communicate with the front office bitter boy,” concluding with a clown face emoji.

One fan responded by referencing the Mets’ high payroll last season, which ended in a sub-.500 record despite a superb season by Stroman. The righty had an answer to that as well.

“Yankees haven’t won a World Series since 2009,” Stroman said. “They routinely spend more than any other team and acquire the biggest names at every trade deadline. The way the spend and players they get should result in much more success than they’ve had…you don’t agree?”

Stroman may have some bitterness towards the Yankees that stems from the 2019 season, when the Yankees were interested in a trade for him prior to the deadline. That never happened, with general manager Brian Cashman saying later in the year that the Yanks “didn’t think he would be a difference-maker,” and felt he would have been in the bullpen during their postseason run, which ended in the ALCS.

Stroman responded to that comment, a questionable one considering the Yankees had some sub-par starting pitching options like J.A. Happ and an aging and banged-up CC Sabathia at the time, by posting his stats compared to the Yankee starters that season.

Needless to say, while the Yanks could use starting pitching help, it doesn’t seem like it will come from Stroman.

The one thing — the one thing — Yankees fans could reliably count on Gleyber Torres to provide, even during his darkest times in 2020 and 2021, might have just disappeared thanks to an architect’s whim. So, in case you’re counting, the Yankees signed Gerrit Cole, then...
MLB・20 HOURS AGO
wesb.com

The New York Yankees agree to a $4 million deal with top international prospect Roderick Arias. The 17-year-old Arias is from Santo Domingo in the Dominican Republic, and the Yankees were especially impressed by his arm at shortstop, as well as his ability to switch-hit.
MLB・2 DAYS AGO
FanSided

Why didn’t the Yankees just sign Zack Wheeler if they almost traded for him?

Cold take’d again! What a bummer. But who saw this coming? Nobody really thought Zack Wheeler would become a Cy Young contender after leaving the Mets for the Phillies. It seems like the New York Yankees saw it coming, though, which makes their decision making after the 2019 season a bit puzzling. Just a bit, though. After all, they still signed Gerrit Cole … though that was for a record-breaking $324 million.
MLB・1 DAY AGO
pinstripedprospects.com

The New York Yankees have officially signed Roderick Arias, the top international prospect in the class of 2021-22. His deal includes a signing bonus of $4 million according to MLB.com. Arias, a switch-hitting shortstop from San Pedro de Macoris, Dominican Republic, is tabbed as a five-tool player by MLB Pipeline...
MLB・2 DAYS AGO

The Astros, Rays, White Sox, Red Sox and Yankees have to shore up these weaknesses to return to the postseason in 2022.
MLB・4 HOURS AGO
WFAN Sports Radio

The futures odds are out for the 2022 World Series, and while a lot can change as the MLB lockout rolls on and eventually gets resolved, the Yankees and Mets are both, as of now, among the favorites.
MLB・1 HOUR AGO
Pinstripe Alley

The New York Yankees can’t deal for any major league player due to the MLB lockout imposed on December 1, 2021, when the players and owners couldn’t agree on a new Collective Bargaining Agreement that halted all major league transactions. But that doesn’t mean the Yankees have been sitting on their hands during the period.
MLB・5 HOURS AGO

When we fans find ourselves in the position we’re currently in (winter, MLB lockout) we often fall on trivia and nostalgia as topics of discussion until the next game arrives. Fortunately for the Yankees, there is no shortage of interesting trivia or nostalgia. To that end, let’s come up with a Yankees “Dream Team” lineup, based on the best individual seasons from Yankees at each position.
MLB・7 HOURS AGO
Inside The Dodgers

Joe Kelly is quite the character around Major League Baseball. With two championships under his belt across a 10-year career, Kelly has made his name known in a big way. He took one World Series against the Dodgers in 2018 and another with Los Angeles in 2020, finally bringing a title back to the ...
MLB・2 DAYS AGO
WEEI Sports Radio

Jonathan Papelbon joined Rob Bradford on the Live BP podcast to make it clear he has no intention of following in the footsteps of his former teammate Jon Lester, saying he will never announce his retirement.
MLB・1 DAY AGO
Audacy

Jonathan Papelbon joined WEEI’s Live BP Show and spoke about the backstory behind why he and Bryce Harper went at it in the Washington Nationals dugout in 2015.
MLB・1 DAY AGO

David Vassegh of AM570's ranked righty Zack Greinke as the Dodgers best free-agent signing of recent memory.
MLB・19 HOURS AGO
Inside The Phillies

The 2021 Phillies were a top heavy team, both in terms of production and salary. Given that level of top talent, which players from last year's team have a shot at reaching Cooperstown?
MLB・21 HOURS AGO
Inside The Dodgers

A CBA expert believes compensation for players still under team control remains the biggest obstacle to a new CBA.
MLB・1 DAY AGO
Inside The Dodgers

The Dodges reportedly have signed pitcher Accimia Morales and position player Samuel Muñoz.
MLB・2 DAYS AGO
Inside The Blue Jays