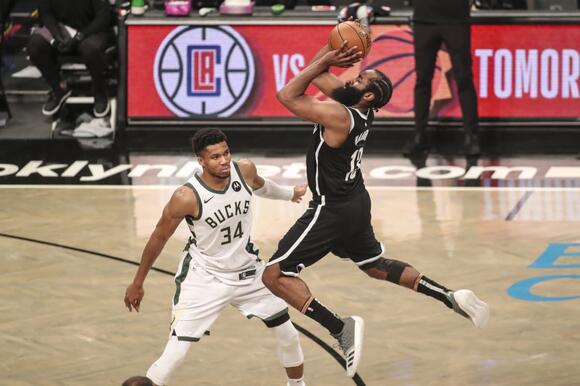 Giannis Antetokounmpo of the Milwaukee Bucks was interviewed by GQ magazine, and one of the things he talked about was his relationship with James Harden of the Brooklyn Nets.

Giannis Antetokounmpo of the Milwaukee Bucks appeared on the cover of GQ Magazine (see tweet below) and did a an interview where he talked about a multitude of things.

One of the things that the two-time MVP spoke about was his relationship with 2018 MVP James Harden of the Brooklyn Nets (see tweet below from Bleacher Report).

"A lot of people think that I have beef with James Harden, which is not true," Antetokounmpo said via GQ.

The full story with the entire interview can be read here.

Antetokounmpo and the Bucks won the NBA Championship last season, and in the second round of the playoffs they beat Harden and the Nets on the road in Brooklyn in Game 7 to advance to the Eastern Conference Finals.

After beating the Nets, they beat the Atlanta Hawks in the Conference Finals and the Phoenix Suns in the NBA Finals.

Antetokounmpo not only won his first title, but also won the NBA Finals MVP Award.

Giannis Antetokounmpo and the Milwaukee Bucks defeated the Chicago Bulls on Friday evening.
NBA・2 DAYS AGO
FastBreak on FanNation

Patrick Beverley has been ruled out for Sunday night's game between the Brooklyn Nets and Minnesota Timberwolves.
NBA・21 HOURS AGO
Sportsnaut

With the 2021-22 NBA season in full swing, basketball fans are putting on their jerseys and filling up arenas around
NBA・1 DAY AGO

If you haven’t checked the standings for a while, you’ll be quick to notice something familiar about the top of the Eastern Conference. The Milwaukee Bucks are once again among the East’s elite after their slow start to the season. NBA League Pass: Sign up to unlock...
NBA・2 DAYS AGO
firstsportz.com

Giannis Antetokounmpo led one of the most influential campaigns a team has ever witnessed when he inspired the Milwaukee Bucks to the championship in the 2020-21 season. Before that particular win, the Bucks topped the Eastern Conference charts, but were unable to make solid runs in the playoffs. As a result of which, their campaign always flopped until last season. Having said that, the Greek Freak opinionated upon just why he is not the best player in the NBA, at least just yet.
NBA・1 DAY AGO
FastBreak on FanNation

Nets Starting Lineup Against The Timberwolves

The Brooklyn Nets have announced their starting lineup for Sunday's game against the Minnesota Timberwolves.
NBA・20 HOURS AGO
FastBreak on FanNation

Grayson Allen has been ruled out for the game between the Kings and Bucks on Friday night in Milwaukee.
NBA・1 DAY AGO

On Friday night, the Milwaukee Bucks played the Chicago Bulls, and it wasn’t a pretty game for the Bucks. Fortunately for Milwaukee, they were able to win despite the downplay. Giannis Antetokounmpo, the Bucks star, was able to do what he does best, scoring 30 points on 11-23 shooting...
NBA・2 DAYS AGO
FastBreak on FanNation

De'Aaron Fox has been ruled out for Saturday's game between the Sacramento Kings and Milwaukee Bucks.
NBA・1 DAY AGO
Sportsnaut

The NBA trade deadline is drawing closer and the Philadelphia 76ers are reportedly no closer to a Ben Simmons trade,
NBA・5 HOURS AGO
CBS Sports

Nets' James Harden complains about how he's officiated this season: 'There's no consistency'

James Harden might be better than any guard in NBA history at getting to the foul line. He's averaged nearly nine free-throw attempts per game for his career and has peaked at almost 12. But the NBA has made a concerted effort to cut back on explicit foul-hunting this season, at it has shown in Harden's numbers. He is averaging only 8.1 free-throw attempts per game this season, higher than he did a year ago, but otherwise the lowest figure of his career after getting traded to the Houston Rockets in 2012.
NBA・4 HOURS AGO

James Harden frustrated with referees in Nets' loss to Wolves

The Timberwolves were 26-for-31 from the charity stripe, while the Nets took just 15 free throws. Harden — outplayed by former Net D’Angelo Russell — shot 4 of 13 and was just 4 of 4 from the line, not getting the benefit of the whistle. “I don’t know [why],” Harden said. “When I go to the basket it’s the same calls that other guys are getting. Obviously you can’t call all of them, but there’s ones where there’s clearly stiff-arms and trips and things; but on the other end there’s no consistency. It’s frustrating, but whatever. [This] was a tough one for us.”
NBA・7 HOURS AGO
charlottenews.net

The wife of NBA legend Steph Curry has called the gossip 'ridiculous'. The wife of Golden State Warriors star Steph Curry, Ayesha, has addressed rumors that the couple is in an open relationship, labeling the speculation 'disrespectful'. Claims circled on gossip blogs in recent weeks and cited an anonymous tip...
CHARLOTTE, NC・13 DAYS AGO
FastBreak on FanNation

Grayson Allen got ejected during the game between the Chicago Bulls and Milwaukee Bucks for a flagrant foul on Alex Caruso.
NBA・2 DAYS AGO
FastBreak on FanNation

The Golden State Warriors beat the Houston Rockets on a buzzer beater from Steph Curry, and after the game Curry spoke to the media.
NBA・2 DAYS AGO
Larry Brown Sports

Russell Westbrook and LeBron James trying to play basketball together has gone even worse than Johnny Lawrence and Daniel LaRusso trying to teach karate together. Now one of Westbrook’s former teammates is putting the onus on James to fix it. Ex-NBA guard Anthony Morrow appeared Friday on SiriusXM NBA...
NBA・2 DAYS AGO
USA TODAY

The Lakers are desperate for help. It appears it’s on the way in the form of none other than Anthony Davis. Davis has been upgraded to questionable and has a chance to play when the Lakers battle the Miami Heat on Sunday. AD is officially a game-time decision. Davis,...
NBA・1 DAY AGO
Sportsnaut