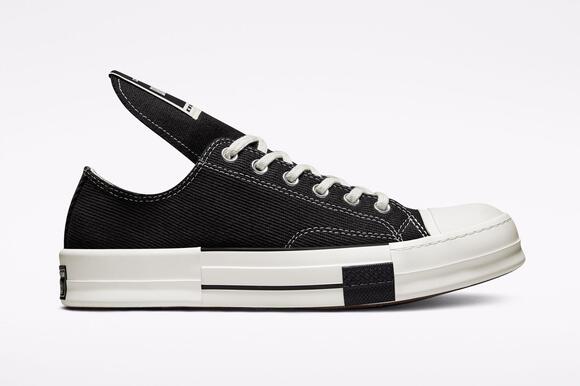 Rick Owens and Converse are back with another sneaker collab.

The fashion designer and the footwear brand have teamed up once again to deliver their latest DRKSHDW DRKSTAR collection, which sneaker fans can purchase now.

After updating the classic Converse Weapon with the DRKSHDW TURBOWPN release in August, Owen and Converse’s latest collaborative offering includes two reimagined versions of the classic Chuck 70 shoe including a high and low-cut style. The upper of each pair is crafted with a heavy-weight 18 oz twill cotton including with the extended tongue, which was also featured on both of Owen’s previous TURBODRK and TURBOWPN silhouettes. The collaborative Chuck 70s are once again presented in the contrasting black and white makeups as a nod to Owen’s signature minimalist and contemporary luxury aesthetics.

In addition to the sneakers, the Rick Owens x Converse DRKSHDW DRKSTAR capsule includes two co-branded hats as well as an oversized backpack.

“When I see something ubiquitous, I feel like I want to distort it. I don’t know what that’s about. Maybe it’s some kind of adolescent rage. But that’s one of the greatest appeals of the Chuck Taylor All Star,” said Owens.

The Rick Owens x Converse DRKSHDW DRKSTAR collection is available now at Converse.com , RickOwens.eu, and at Rick Owens and Converse retailers. Retail pricing for the collab ranges between $60 to $200.

Manolo Blahnik Reflects on 5 Decades of Friendship With André Leon Talley: ‘He Was Like a Brother to Me. He Was Always Shining.’

Few people knew André Leon Talley like Manolo Blahnik, who reflected on five incredible decades of friendship with the legendary editor in a heartfelt statement today. “He was like a brother to me, and I treasured every minute of our five decades of friendship,” Blahnik said. “André was a force in fashion and paved the way for so many creative people in an industry he adored and was integral to. He was honest, spirited and always candid.” Talley died on Tuesday in a White Plains, N.Y hospital. The cause of death was not revealed, but The New York Times reported that he...
DESIGNERS & COLLECTIONS・4 HOURS AGO
Footwear News

Hailey Bieber gives a lesson in color with her latest look. The model was spotted yesterday out and about in Los Angeles with Alexa Demie, a star on HBO’s “Euphoria”, while wearing a casual, functional outfit. For the ensemble, Bieber donned a white cropped polo-style button-up short sleeve top paired with a long-sleeve waffle-knit cropped shirt for a layered effect. On the lower half, she threw on a pair of pink stretch pants that added a pop of color. She accessorized the moment with dainty necklaces, gold hoop earrings and square black sunglasses. When it came down to footwear, Bieber opted for...
LOS ANGELES, CA・4 DAYS AGO
Footwear News

Mimi Cuttrell knows what’s hot. Now, the celebrity stylist responsible for Ariana Grande, Normani and Madelyn Cline’s latest looks will have a hand in dictating this year’s biggest shoe trends — thanks to her collaboration with By Far. This month, the brand and Cuttrell teamed up to create unique collection of shoes and bags, reforming By Far’s signature styles with nine new silhouettes, including two new bag styles. Cuttrell said she was intrigued most by “the creative process, bouncing ideas back and forth off of one another.” She added, “There was so much detail and thought put into every aspect of each...
DESIGNERS & COLLECTIONS・5 DAYS AGO
The Independent

The fashion industry is mourning the loss of “indomitable” Andre Leon Talley, following his death at the age of 73.The former Vogue creative director died in New York on Tuesday, his representatives, TAA PR, said in a statement.During a career spanning five decades, he befriended big names in the fashion world, including Yves Saint Laurent, Karl Lagerfeld and Paloma Picasso.Fellow designers, models and other members of the industry paid tribute to Talley as a “force of nature”. View this post on Instagram ...
DESIGNERS & COLLECTIONS・13 HOURS AGO

Kanye West and Kim Kardashian are in the middle of a style reinvention, with the former frequently appearing in Balenciaga (apt given the just-announced YEEZY GAP x Balenciaga “creative exploration”), as well as Bottega Veneta, and notably, Rick Owens. Now, a pair of original Rick Owens Porsche sunglasses, as debuted during the avant-garde designer’s Spring/Summer 2012 “NASKA” runway, have appeared for sale through Machine-B, the ongoing partnership between London’s Machine-A concept store and the designer archive collective Byronesque.
DESIGNERS & COLLECTIONS・11 DAYS AGO
WWD

Click here to read the full article. MILAN — Adidas and Prada are taking their collaboration one step further by including apparel for the first time — and raising the sustainability bar even more. The Adidas for Prada Re-Nylon collection, which launches on Jan. 13, reinterprets each brand’s aesthetic codes once again, blending the Italian brand’s craftsmanship with Adidas’ sportswear heritage.More from WWDMade in GermanyPrada Men's Spring 2022Maria McManus Winter 2021 Collection Prada and Adidas in 2019 first revealed they were teaming on a long-term collaboration and this is the third collection launched by the two brands. Each piece is made in...
DESIGNERS & COLLECTIONS・14 DAYS AGO
SneakerFiles

LaMelo Ball’s signature shoe, the MB.01, will connect with Adult Swim’s Rick and Morty for a special drop. Currently, images of this Rick and Morty x Puma MB.01 have yet to leak. However, the pair will come dressed in a Jasmine Green and Nrgy Rose color combination, reflecting the colors used throughout the show. While not confirmed, the pair is expected to feature co-branding and unique packaging.
TV & VIDEOS・11 DAYS AGO

DALLAS--(BUSINESS WIRE)--Jan 5, 2022-- At Home, The Home Décor Superstore, announced today it has launched an exclusive collection with Emmy Award-winning TV Host, designer and author Ty Pennington. The home décor collaboration blends timeless design elements with casual, cool comfort and it’s all at a great price. The line features hundreds of items from wall art, textiles, furniture and patio to kitchen and dining, rugs, lighting, and home accents as low as $4.99.
RETAIL・14 DAYS AGO
MarketWatch

Brilliant Earth Group Inc. said Monday that it has partnered with luxury fine jewelry company Tacori for a new bridal collection consisting of six engagement rings and four wedding bands. Prices range from $2,150 to $5,690, and items come in yellow gold, rose gold, white gold and platinum. Brilliant Earth presents data showing that 2022 will see a record high number of weddings in the U.S., including postponed and rescheduled ceremonies. Brilliant Earth stock began trading in September 2021. Shares are down 10.5% in Monday trading, and have run up 30.4% over the last three months. The S&P 500 index has gained 4.7% over the last three months.
APPAREL・9 DAYS AGO
hypebeast.com

Indonesia’s fashion scene has birthed several different brands in the streetwear space, one being Poshbrain which first arrived on the scene in 2015. The brand — which was first started in the city of Bandung — has become locally recognized for tapping into the music and fashion realms, and it has just released its newest Spring ‘22 apparel collection.
DESIGNERS & COLLECTIONS・10 DAYS AGO
San Diego Union-Tribune

Gap has made headlines on occasion for interesting intersections of culture engagement, but it certainly wasn’t a brand at the top of our mind when we thought about upcoming NFT releases. We’ve seen athletic brands like Nike and Adidas start to get involved with NFTs, and designer brands like Burberry, Gucci, Louis Vuitton and many others have been exploring unique blockchain and NFT engagement. However, it is indeed Gap that is now the latest apparel brand to get involved in the space, announcing a new gamified NFT collection this week.
APPAREL・6 DAYS AGO
Complex

Parisian running label Satisfy has looked to one of the world’s most famous prehistoric monuments, Stone Henge, for its latest collection. Developed in collaboration with UK-based modern outdoor creative studio Dreaded Path, the accompanying campaign pays homage to the powerful spiritual magnetism that Stonehenge has provided communities for a deca-millennium.
DESIGNERS & COLLECTIONS・2 DAYS AGO
hypebeast.com

Edgar Plans to Launch His First Collection of NFTs

Edgar Plans recently took his Animal Hero from the confines of the canvas to an augmented reality setting. The Spanish contemporary artist has gone one step further by announcing that he will release a new NFT collection, dubbed Lil’ Heroes. Made in collaboration with Curatible and Exile Studio, the...
DESIGNERS & COLLECTIONS・4 DAYS AGO
la-story.com

Pixi Beauty has created an amazing HELLO KITTY collection!. Don’t miss this great array of products from Pixi Beauty. I have known, bought, and used lots of Pixi Beauty products. The products are affordable and they deliver the color and/or texture you want!. Stevie Wilson. LA-Story.com. DEALS and STEALS...
MAKEUP・2 DAYS AGO
Marie Claire

Last week, luxury fashion house LOEWE released their latest collaboration with Studio Ghibli, the beloved Japanese animation studio. After LOEWE’s wildly successful 2021 collection based on the 1988 Ghibli film My Neighbor Totoro, the Madrid-based based brand came out of the gates in 2022 with a line similarly based on Hayao Miyazaki’s 2001 masterpiece Spirited Away.
DESIGNERS & COLLECTIONS・8 DAYS AGO
Footwear News

The Louis Vuitton and Nike “Air Force 1” by Virgil Abloh sneakers are almost here. Open for bidding Jan. 26, 200 special-edition pairs of the shoes, paired with a Louis Vuitton pilot cases, are up for auction in partnership with Sotheby’s. Proceeds will benefit The Virgil Abloh “Post-Modern” Scholarship Fund, which in partnership with the Fashion Scholarship Fund, supports the education of academically promising students of Black, African American, or African descent — per Abloh’s wishes. The designer, who founded and built Off-White into a formidable brand and made a huge mark at Louis Vuitton as the men’s artistic director, died at...
AEROSPACE & DEFENSE・43 MINUTES AGO
The Independent

Beloved fashion icon André Leon Talley has died at the age of 73, leaving the fashion world in mourning.The former US Vogue creative director died in New York on Tuesday, his representatives confirmed in a statement.Over his five-decade-long career, Talley, who became US Vogue’s first African-American creative director from 1988 to 1995 and later the magazine’s editor-at-large, was a glamorous staple at events like runway shows, red carpets and launches.Fellow designers, models and other members of the fashion industry paid tribute to Talley as a “force of nature”.We take a look at some of the late journalist’s best fashion moments...
DESIGNERS & COLLECTIONS・10 HOURS AGO
92.7 The Block

The first drop from the Fear of God x Adidas collaboration might be ready in time for Spring 2022.
BEAUTY & FASHION・21 HOURS AGO