Can the Royals and Dodgers Possibly Work Out a Cody Bellinger Trade? 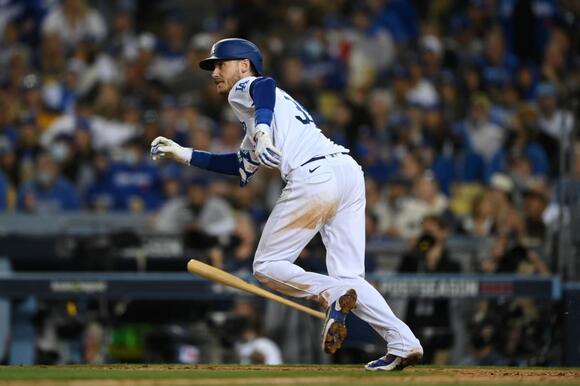 Hollywood is known for A-List stars, but the LA Dodgers have a fallen one in Cody Bellinger who may pique the Kansas City Royals' interest.

Welcome back to the 29 trades in 29 days series. Every day, I will be taking a look at a new MLB team in an effort to find a trade package that makes sense for the Kansas City Royals to hypothetically pursue. For some ground rules and an example, check out the first installment of the series . Today, let's continue our run with the National League West as I examine a possible trade involving the Los Angeles Dodgers.

The Dodgers have endless amounts of cash to spend every offseason, so replacing players has never really been a problem for them. However, this year is a little bit different. The Dodgers chose not to offer Clayton Kershaw a qualifying offer, Max Scherzer is gone and Trevor Bauer's future remains unclear. That’s three starting pitchers they are going to have to replace this offseason and while Dustin May could fill one of those spots eventually, he’s going to be out most of next season recovering from Tommy John surgery.

While this is most certainly a pitching-rich free-agent class this year, the Dodgers can’t count on signing everybody. The Royals are anything but rich in pitching, but there is perhaps a piece that could be moved at the peak of his value for a player that at once would’ve been perceived as untouchable.

The Dodgers value experience when it comes to starting pitching, as five pitchers this year that made a start for them were over the age of 30. This means that Minor should fall right into their wheelhouse. When the Dodgers traded for Danny Duffy this year, they wanted him to be a left-handed pitcher that could float between the rotation and the pen. Minor can fill that same role. While his contract might be a bit inflated at $10M this coming season, the Dodgers are more than capable of absorbing that blow.

Hernandez, despite the lack of name value, would be the main player going to the Dodgers. He impressed this year, putting up an ERA of 3.68 in 24 appearances. Hernandez is a power righty with a fastball that sits around 97 MPH, with four other pitches that are pretty evenly used as well. However, his walk rate was a bit concerning at just over four per nine innings and despite possessing power stuff, he didn’t rack up elite strikeout numbers.

Hernandez’s value may never be higher than it is right now, and the Dodgers could be interested in a pitcher that possesses the type of power stuff they crave and a player who also would be making under $1M in 2022.

In return for these two, the Royals would be getting a former MVP in Cody Bellinger who is coming off the worst season in his professional career by miles, slashing .165/.240/.302. This was on the heels of a rather unspectacular 2020 in which he slashed .239/.333/.455. So the question becomes who is the real Bellinger : the one who in his first three seasons won Rookie of the Year, MVP, a Gold Glove and a Silver Slugger, or the current version we see now?

The truth probably lies somewhere in the middle and if his postseason was anything to go by, there should still be plenty enough left in the tank for Bellinger. The question is whether or not the Dodgers will be patient enough to see if he can recover. With Starling Marte being available this offseason and Max Muncy holding down first base, his everyday spot on the roster is far from guaranteed.

The Royals were the beneficiaries of giving Andrew Benintendi a chance to play for them every day after he struggled in his last two seasons with the Boston Red Sox. Kansas City should give the same type of chance to Bellinger — whether it’s as an outfielder, first baseman or designated hitter. There is simply too much potential to pass on here.

While most of the trades I propose are to make the Royals better immediately, this is a trade that might take a couple of years before its impact is truly felt. How you feel about Hernandez’s potential will probably shape how you feel about this trade. If the Royals can flip a surprise breakout player for a former MVP, this could end up being a trade that has both immediate and long-lasting impact as a downright steal.

Read More: Putting Together a Blockbuster Trade Package With the Mets

Braves: A Freddie Freeman contract to beat out Yankees, Dodgers

The Braves know exactly what they have to offer Freddie Freeman to take him off the free agent market — they’re just unwilling to go there for now. The pressure on the Braves from Freeman’s camp has been growing all offseason. Even in an MLB lockout where contract negotiations are forbidden, it would seem Freeman’s return to Atlanta — once seen as a guarantee — is far from that all of a sudden. The Yankees and Dodgers remain significant competition for Freeman’s services.
MLB・1 DAY AGO
Inside The Dodgers

The former Dodgers slugger was a fresh of breath air for the Atlanta Braves.
MLB・16 HOURS AGO
Inside The Dodgers

David Vassegh of AM570's ranked righty Zack Greinke as the Dodgers best free-agent signing of recent memory.
MLB・1 DAY AGO
Inside The Dodgers

The Dodgers agreed to a minor league deal with the hard throwing Matusda.
MLB・1 DAY AGO

Yefry Ramirez has been re-signed to a minor league contract by the Dodgers, according to reports. The right-hander pitched in the Los Angeles organization in 2021, making 22 starts and three relief appearances with Triple-A Oklahoma City. The 28-year old also made one relief appearance for the ...
MLB・1 HOUR AGO
MLB Daily Dish

MLB trade rumors and news: The Dodgers have a new general manager

The MLB Daily Dish is a daily feature we’re running here at MLBDD that rounds up roster-impacting news, rumors, and analysis. Have feedback or have something that should be shared? Hit us up at @mlbdailydish on Twitter or @MLBDailyDish on Instagram. Amid a flurry of hirings and promotions on...
MLB・3 HOURS AGO
KNX 1070 News Radio

Nomar Garciaparra was one of several stars in attendance for the Los Angeles Rams’ playoff game Monday night, and he looks like he can still hit .300.
MLB・1 DAY AGO

Jonathan Papelbon joined Rob Bradford on the Live BP podcast to make it clear he has no intention of following in the footsteps of his former teammate Jon Lester, saying he will never announce his retirement.
MLB・2 DAYS AGO
Inside The Dodgers

The futures odds are out for the 2022 World Series, and while a lot can change as the MLB lockout rolls on and eventually gets resolved, the Yankees and Mets are both, as of now, among the favorites.
MLB・22 HOURS AGO
USA TODAY

Despite 609 career home runs and seven All-Star appearances, the former Cubs slugger hasn't come close to being elected in his nine years.
MLB・2 DAYS AGO

The 2021 Phillies were a top heavy team, both in terms of production and salary. Given that level of top talent, which players from last year's team have a shot at reaching Cooperstown?
MLB・1 DAY AGO
Inside The Phillies

The Astros, Rays, White Sox, Red Sox and Yankees have to shore up these weaknesses to return to the postseason in 2022.
MLB・1 DAY AGO
Audacy

Carlos Correa announced on Tuesday that he was switching agents to Scott Boras and on Wednesday it was reiterated that he was looking for a minimum $330 million contract.
MLB・1 HOUR AGO
Chicago Tribune

The middle of January traditionally signals the changing of the seasons in Chicago, a time to wash away the gloom of another Bears disaster and start thinking warm thoughts. In most years, the sidewalks are caked in ice, another polar vortex is plunging down from the Arctic and the Cubs and White Sox are holding their annual fan fests at a downtown hotel, celebrating the past while hyping the ...
NFL・2 DAYS AGO
Inside The Phillies

RHP Mick Abel and SS Bryson Stott fall in at 51 and 67 on Baseball America's Top 100 Prospect List.
MLB・56 MINUTES AGO