Jehovah's Witnesses throwing out norms to spread their faith 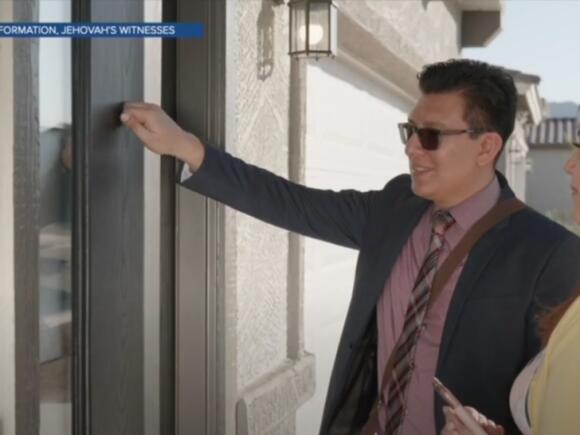 The way Americans worship in this country has changed dramatically in the new world of COVID-19. For Jehovah's Witnesses, their whole platform had to change, and the church has moved away from norms to share its message of faith.

There are about 20,000 Jehovah's Witnesses in Colorado alone, according to Hendriks. There are 1.3 million among 13,000 congregations nationwide.

The pandemic shutdowns in 2020 forced the church to stop knocking on doors, the traditional way of spreading the word of the church.

"Knocking on doors is what we're used to," said local Jehovah's Witness Frank Sutton. "I've been used to doing that since I was a little kid."

Frank and his wife are now living through unprecedented changes now.

It's those opportunities that seem to be showing more promise than, perhaps, originally expected.

"All of a sudden, now our meeting attendance was swelling, we were bringing in folks who we had not seen for a while," Hendriks said.

What the church hasn't learned, according to Hendriks, is how to come out of a pandemic safely. That's something the Sutton's are confident they'll figure out.

"We'll follow the guidance that we're given, making sure that all lives are kept safe as we kind of go into the new normal," Sutton said.

Jehova witnesses are a cult. They do not believe that JESUS CHRIST IS JEHOVA CHRIST AND LORDGOD. They believe that satan and JESUS CHRIST are brothers. I have spoken to many of them and their beliefs are NOT CHRISTIAN LIKE. SINCERELY, SEMPER FI

Voices: If you’re using the Bible to condemn being gay, you’re reading it wrong

In one of the more bizarre stories of the week, a Christian couple has reportedly refused to allow a gay couple to view their home.Luke Main, 33, and his wife, Dr Joanna Brunker, 34, put their cottage up for sale with estate agency Purplebricks. They screened potential viewers by asking, “Would you mind telling us a bit about your position and circumstances when you have a moment please?”You’d be forgiven for thinking this is a standard question about whether potential viewers have a property to sell, have a mortgage in place, or whether they’re just time-wasters fancying nosing around someone...
RELIGION・22 HOURS AGO
claytodayonline.com

There’s a remarkable truth at the center of our faith: God desires to have a personal, intimate relationship with YOU! That’s right, God longs to be a key part of your every day. He doesn’t want to merely sit on the sidelines, watching your life go by. He wants to be right by your side through the thick and thin of life.
RELIGION・2 DAYS AGO
ccenterdispatch.com

Mrs. Gibson, first grade teacher at Garfield Grade School in 1957, emphasized that to her students. “There isn’t anything impossible when one has the determination.”. It’s a lesson never forgotten always coming to mind when something seems unachievable. “When the going gets tough, the tough get going,”...
RELIGION・1 DAY AGO
Galion Inquirer

I have a deep concern for people who claim to be Christians, but show no signs of being Christian. Let me explain. Often, I will talk to people in their fifties and sixties who tell me they are Christians. Then through the course of conversation, I find out they have not attended church since they were children. I understand that attending church does not make one a Christian any more than standing in the garage makes a person a car.
RELIGION・1 DAY AGO

Faith | Prayer, faith and thank you’s are key in the COVID pandemic

Some of the most heart-wrenching (and inspirational) experiences I have heard during this pandemic have involved frontline medical workers. In all parts of the world, the spikes in hospital patient numbers at the height of the pandemic put these passionate and brave workers into situations that they had never dreamed of. My heart goes out to all of the doctors, nurses, aides, and receptionists who daily faced scenes of chaos, suffering, and death.
KENNEWICK, WA・12 DAYS AGO
Amarillo Globe-News

Biltmore United Methodist Church of Asheville, North Carolina, is for sale.  Already financially strapped because of shrinking membership and a struggling preschool, the congregation was dealt a crushing blow by the coronavirus. Attendance plummeted, with many staying home or switching to other churches that stayed open the whole time. Gone, too, is the revenue the church formerly got from renting its space for events and meetings.  ...
ASHEVILLE, NC・41 MINUTES AGO
Hillsdale Daily News

The words of Buddha and Jesus

Buddha famously said that life is suffering. There is certainly an element of truth to this. Ever since the fall of mankind into sin, this world has been one of continual suffering. Even within our own lives, the idea of suffering is clear. I don’t mean that we are all suffering as much as we possibly could in this life. Some are, but most probably are not. Rather, that if we were to chart our lives, there would be an upward trend, for a time, but then a very long and very slow downward trend. ...
HILLSDALE, MI・32 MINUTES AGO
Recorder

(Each Saturday, a faith leader offers a personal perspective in this space. To become part of this series, email religion@recorder.com) On this day 93 years ago, Martin Luther King Jr. was born. How will we honor his life and vision on this Monday’s holiday?. Dr. King’s message is one...
GREENFIELD, MA・7 DAYS AGO

I used to just love watching my baby breathe while sleeping. Not in a creepy way, mind you. The rhythmic movement of the tiny body captivated me. Maybe it was my own yearning for that capacity to breathe so deeply, oblivious to the world around me. Maybe it was my own longing to just be, to know I’m safe.
RELIGION・6 DAYS AGO
Cape May County Herald

GOSHEN – “I’ve always had this faith inside of me,” Will Keenan said, as a snowstorm bore down Jan. 3. . In a virtual interview, Keenan, 47, revealed how an unlikely path led him to purchase and revitalize a former United Methodist Church building. . From the big...
GOSHEN, NJ・3 DAYS AGO
The Independent

Vietnamese Zen Buddhist monk Thich Nhat Hanh has died at the age of 95. The peace activist gained prominence in the 1960s as a major opponent of the Vietnam War and is known as a pioneer of Buddhism in the west.The Plum Village, which is a global community of mindfulness practice centers and monasteries founded by Nhat Hanh in southern France, confirmed the monk’s death on Twitter.“The International Plum Village Community of Engaged Buddhism announces that our beloved teacher Thich Nhat Hanh passed away peacefully at Tu Hieu Temple in Hue, Vietnam, at 00:00hrs on 22nd January 2022, at the...
RELIGION・39 MINUTES AGO
Newsweek

The poster said they have not been on speaking terms with their sister after branding her life "a massive dumpster fire."
FAMILY RELATIONSHIPS・2 DAYS AGO

"It might ease the culture difference to discuss what she finds triggering about the models," one commenter suggested about his "war machines" collection.
SOCIETY・1 DAY AGO
Newsweek

The resolution "rejects and condemns without any reservation any denial of the Holocaust as a historical event, either in full or in part."
GERMANY・1 DAY AGO
Washington Examiner

Over the years, feminists, especially third-wave feminists, have diligently worked to dismantle the alleged "patriarchy." From their support for abortion to gender equality in schools, athletics, and salaries to emphasizing sexual harassment, abuse, and assault, feminists have effectively shaped the country's sociocultural spectrum in the 21st century. So it's beyond...
SOCIETY・15 HOURS AGO
Fox News

Recent Cuban immigrant and college student shocked by peers' perception of socialism, seeks to dismantle it

A Cuban student enrolled at Syracuse University said he was stunned by the way his fellow students perceived socialism. Justo Antonia Triana studies Classical Civilization and Political Science and writes poetry, articles, and narratives in both Spanish and English. He also moved to America in 2019 after his father filed for a family reunification after leaving Cuba five years earlier.
IMMIGRATION・1 DAY AGO

Russell Bishop was seen as a “cowardly” paedophile who spent most of his adult life in denial over the Babes in the Wood murders.During his 2018 trial, prosecutor Brian Altman QC described him as “an abusive, aggressive, controlling man” who was capable of “extreme sexual violence”.But when called to account for his crimes, the predator hid behind “cowardly” lies and even cast himself as the victim before refusing to carry on.Growing up in Brighton on the south coast, Bishop was the youngest of Sylvia and Roy Bishop’s five sons.Mrs Bishop, described in court as a “domineering” matriarch, was a successful...
PUBLIC SAFETY・22 HOURS AGO
The Independent

Mexican abortion advocates look to help women in US

Decades ago, Mexican activists drove women into the United States to terminate their pregnancies at clinics. Now it’s women in the U.S. who are facing more challenges to accessing abortion services and again Mexican activists are stepping up to offer support.The changing dynamic has to do with the reversal of the legal fortunes of abortion rights on both sides of the border and the expertise of Mexican activists in helping women overcome legal and social barriers. In September, Mexico’s Supreme Court issued a decision declaring that abortion was not a crime in the heavily Roman Catholic nation. That same...
WOMEN'S HEALTH・2 DAYS AGO
AFP

The UN General Assembly on Thursday adopted a non-binding resolution calling on all member states to fight against Holocaust denial and anti-Semitism, especially on social media. The Israeli-proposed text was developed with the help of Germany and co-sponsored by several dozen of the 193 states that make up the United Nations. Iran, however, expressed opposition to the resolution, stating that Tehran dissociated itself from the text. The resolution "rejects and condemns without any reservation any denial of the Holocaust as a historical event, either in full or in part," according to the text.
INSTAGRAM・1 DAY AGO