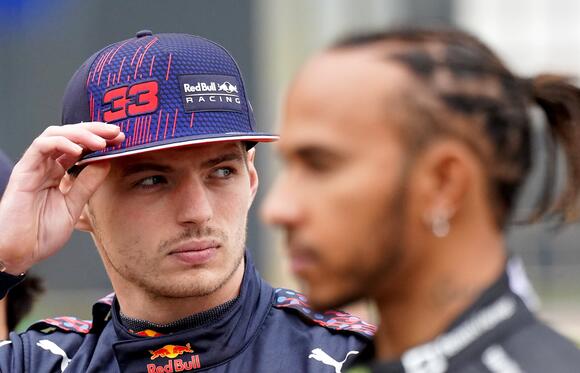 Lewis Hamilton ’s bid for a record-breaking eighth world championship took another fascinating twist on Tuesday after Mercedes called on Formula One’s stewards to reconsider their decision not to penalise rival Max Verstappen at the Brazilian Grand Prix.

Hamilton won the Interlagos race following a superb comeback drive , but Verstappen escaped punishment for running his rival off the road as they duelled for first position.

The stewards noted the incident before looking at the footage and choosing not to launch a formal investigation – a decision Mercedes team principal Toto Wolff described as “laughable”.

FIA race director Michael Masi later revealed that the on-board video from Verstappen’s car was not available when the stewards acted.

At 12:25pm, the footage was aired on social media for the first time, and a little more than three hours later, Mercedes officially exercised their right to review the flashpoint.

In a short statement, the world champions said: “The Mercedes Team confirms that we have today requested a Right of Review under Article 14.1.1 of the International Sporting Code in relation to the Turn 4 incident between Car 44 [Hamilton] and Car 33 [Verstappen] on lap 48 of the Brazilian Grand Prix, on the basis of new evidence unavailable to the stewards at the time of their decision.”

The FIA’s International Sporting Code allows a right to review on the grounds that “a significant and relevant new element is discovered which was unavailable to the parties seeking the review at the time of the decision concerned”.

The stewards will now consider the significance of the new footage and whether it warrants an appeal.

A retrospective five-second time penalty for Verstappen would see him drop behind Hamilton’s Mercedes team-mate Valtteri Bottas to third in Sunday’s result – reducing his championship advantage over Hamilton from 14 to 11 points.

A grid penalty could also be an option to the stewards if the incident is reviewed.

Lewis Hamilton is staying quiet because he wants to distance himself from Mercedes chief Toto Wolff, claims ex-F1 champion Jacques Villeneuve... who thinks Brit could turn his attention to a career in HOLLYWOOD

Ex-Formula One World Champion Jacques Villeneuve believes Lewis Hamilton could be set for a career in Hollywood, after the Mercedes driver continues to remain quiet ever since his controversial defeat to Max Verstappen in Abu Dhabi. Hamilton saw what would have been a record-breaking eighth crown slip through his fingertips...
MOTORSPORTS・1 DAY AGO
The Independent

An Australian Grand Prix boss says the Formula 1 won’t have a visa situation like Novak Djokovic’s and says the country’s entry rules are “simple”.Questions are being raised in every sport in Australia which requires athletes to travel to the country after the tennis player was deported after his visa was cancelled. But the GP’s CEO Andrew Westacott has reassured fans a similar incident won’t impact the event, which will take place on 10 April.“We’ve worked very closely with the Victorian government throughout 2021 and in the lead up to 2022,” he said. “And of course we’ve worked very, very...
TENNIS・2 DAYS AGO
The Independent

The competition in Formula 1 will be closer with multiple cars expected to be in the mix in 2022, according to an FIA chief.Regulation changes have been introduced for the upcoming season to improve the aerodynamics of the car and teams like Alfa Romeo and Haas could capitilise. Head of Single Seater Technical Matters at the FIA, Nikolas Tombazis, says he expects those underdog teams to challenge for race wins.“It is difficult to expect it to be more exciting than [2021] because that is a very high point of reference,” said Tombazis, quoted by Autosport. “But I think once there’s...
MOTORSPORTS・2 DAYS AGO
firstsportz.com

Jacques Villeneuve the former MotoGP rider and 1997 world champion has recently given his view on the whole Lewis Hamilton retirement saga. It has been stated in Speedweek that Jacques Villeneuve has recently during an interview stressed the key factor that according to him could help Lewis Hamilton in making a final decision regarding his retirement.
MOTORSPORTS・1 DAY AGO

That’s why, in the latest list of our ‘Top 10 drivers’ series, we’ve extended the remit beyond F1 to include all grand prix racing, which kicked off with the 1906 French GP near Le Mans. The importance of events, many of which were standalone or part of the European Championship, varied but the top ones were akin to today’s F1 championship races.
MOTORSPORTS・3 HOURS AGO
The Independent

Alpine CEO Laurent Rossi has called Silverstone and Monza “shabby” and the “great” tracks will have to be at the “top of their game” to stay staple circuits in the Formula 1.Multiple new circuits are coming into the sport with the 2022 season having more than any other year with 23 slated. And the F1 isn’t stopping there with more talks being had elsewhere which could increase the amount of tracks in 2023. Rules state the F1 can’t have more than 25 races in a year and Rossi believes older circuits need to update or risk getting cut.“I personally think...
MOTORSPORTS・2 DAYS AGO
SkySports

George Russell is relishing his big Formula 1 chance this season and Lewis Hamilton will have his hands full battling his young Mercedes team-mate for the title, believe the Sky Sports F1 pundits. In a partnership that pitches a rising F1 superstar against the sport's most successful and famous driver,...
MOTORSPORTS・2 DAYS AGO
Financial World

Australian Grand Prix authorities have warned the Seven-time Formula One Champion Lewis Hamilton alongside his McLaren crew members that they will not be allowed to take part in Australian Grand Prix, unless they are fully vaccinated against the pandemic pathogen, as race organizers have been looking to avoid the fiasco that involved tennis No 1 Djokovic.
TENNIS・8 HOURS AGO

That’s why, in the latest list of our ‘Top 10 drivers’ series, we’ve extended the remit beyond F1 to include all grand prix racing, which kicked off with the 1906 French GP near Le Mans. The importance of events, many of which were standalone or part of the European Championship, varied but the top ones were akin to today’s F1 championship races.
MERCEDES, TX・2 HOURS AGO