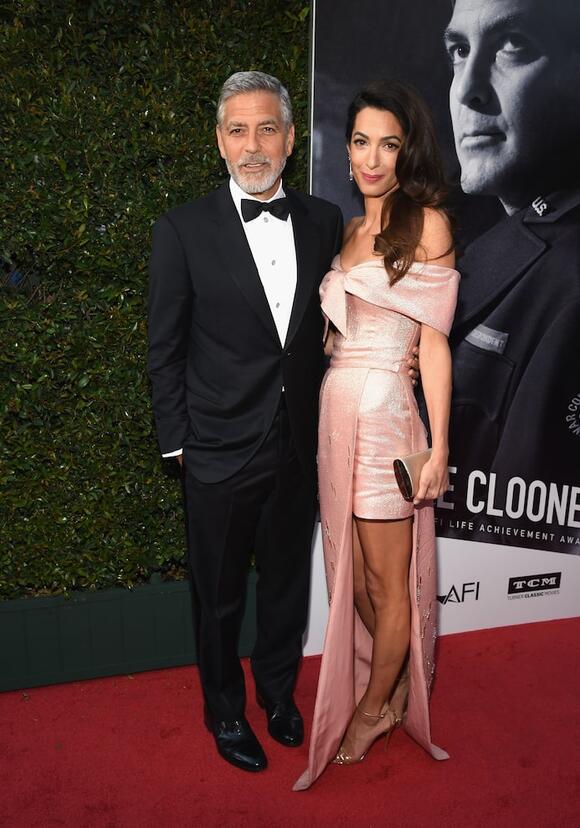 Actor George Clooney, 60, is opening up about the shocking moment he found out his wife Amal was expecting twins.

Clooney shared the story on the “WTF with Marc Maron” podcast, saying he never thought having a family was in the cards for him.

"Listen, I didn't want to get married,” he said. “I didn't want to have kids. And then this extraordinary human being walked into my life and I just fell madly in love. Then I knew from the minute I met her that everything was going to be different.”

He went on to explain, "[Amal's] sister has twins and I was gobsmacked because... I was kind of up for one… I love it now. And thank God they have each other during the pandemic."

George and Amal welcomed Ella and Alexander in June 2017, and the tots are now 4 years old.

Clooney also revealed the moment the couple decided they wanted to be parents.

George said, "So we've been married for about a year and we were at a friend's house, and they had a kid there which was loud and obnoxious and I was like, 'Holy s—t.' We went outside for a walk. And she'd never thought about it, really. And so then she said, 'We are awfully lucky in life.' And I said, 'Yeah, we are lucky we found each other,'" Clooney recalled, adding, "She said, 'Seems like that luck should be shared with some other folks.'”

He went on, "And then I just said, 'Well, I mean, if you're in' and she said, 'I think we should try.' I have to say it was very emotional because I really was convinced that wasn't my lot in life and was comfortable with that.”

As far as parenting goes, Clooney wants his kids to be resilient.

"I learned to be scrappy because of that. You can put me in any situation, I can survive," Clooney said. "I can survive anything. I had to make sure that that's something that our kids get. That's important to me."

George and Amal Clooney's marriage is one of Hollywood's most talked-about. Despite the fact that the couple is much adored, the tabloids continue to speculate about their romantic relationship. According to one tabloid, the couple's marriage was crumbling, resulting in a costly divorce fight. Let us take a closer look at this rumor.
TROUBLE RELATIONSHIP・13 DAYS AGO
In Style

Who: Actress Talia Balsam, 62, and Oscar-winning actor, producer, writer, and director George Clooney, 60. How They Met: According to a 1996 Vanity Fair profile, Balsam and Clooney hit it off while co-starring in a "local play" in 1984. She broke up with him, they got back together, and he proposed, the relationship culminating in a Las Vegas wedding in December 1989.
CELEBRITIES・11 DAYS AGO
enstarz.com

Did George Clooney ignite a divorce from Amal that the couple no longer sleeps in the same room anymore?. Clooney and his wife, Amal, found each other later than expected and only got married eight years ago. Despite that, they maintain their close relationship as they take care of their twins, Alexander and Ella, together.
RELATIONSHIPS・6 DAYS AGO
The Atlantic

Five years ago, I talked to George Clooney at the Toronto International Film Festival about his latest directorial effort, Suburbicon, a strange hybrid of black comedy and social satire that failed to connect with critics. At that time, Clooney was more than 30 years into an acting career that had seen him star on the hit TV show ER, play Batman, win an Oscar, and work with directors such as Steven Soderbergh, the Coen Brothers, and Alfonso Cuarón, on top of making his own films. He’d also co-founded an enormously successful tequila company. In discussing Suburbicon, Clooney’s attitude was simple: If he directs or appears in a project these days, he’s doing so purely out of his own passion for the material.
MOVIES・9 DAYS AGO

Lily Rabe is one of the busiest performers in Hollywood. In just the past year and a half, you've seen her in "The Undoing," "Tell Me Your Secrets," "The Underground Railroad" and of course, "American Horror Story." Now, in the new George Clooney-directed Amazon studio film "The Tender Bar," she costars with Ben Affleck, Christopher Lloyd and Tye Sheridan as a tenacious single mother with big dreams for her only child.
MOVIES・8 DAYS AGO
Corydon Times-Republican

Nearly eight years have passed since George Clooney and Amal Clooney tied the knot. But, even after those years, the two celebrities maintain a love-filled relationship. Fans would recall that the "Tomorrowland" actor recently gushed about his wife in one of his interviews. He said that he is "lucky" that he found the ideal partner. Despite this, though, rumors continue to follow the couple around. One of the latest claims even alleged that they no longer share a bedroom, and are "sleeping apart."
CELEBRITIES・3 DAYS AGO
thechronicle-news.com

George Clooney says Ben Affleck was his first choice for the role of Uncle Charlie in 'The Tender Bar'. The 60-year-old Hollywood icon directed the 2021 coming-of-age drama - which is an adaptation of the 2005 memoir of the same name by J. R. Moehringer - and has revealed the 49-year-old actor was the first person both he and producer Grant Heslov thought of to portray the "smart and well-read" character.
CELEBRITIES・19 HOURS AGO

You might think that Mark Wahlberg would be an intimidating figure to any of his daughters' potential suitors. But, as it turns out, he gets along swimmingly with his daughter's boyfriend. As Entertainment Tonight noted, Wahlberg posted a video of himself working out with his daughter Ella Rae's boyfriend, proving that the pair are two gym rats in a pod.
CELEBRITIES・7 DAYS AGO
TODAY.com

On “The Kelly Clarkson Show,” actor Ben Affleck revealed that he and friend Matt Damon once learned how to break dance and considered performing down at the subway to make money.Jan. 4, 2022.
THEATER & DANCE・13 DAYS AGO
People

John Cena Reveals Why He Isn't Considering Fatherhood: 'You Have to Have Passion for It'

Fatherhood will not be in John Cena's future anytime soon. During his appearance on The Drew Barrymore Show on Monday, the Vacation Friends star, 44, shared why he believes fatherhood is not the right move for him at the moment. The topic was brought up on the show after host...
FAMILY RELATIONSHIPS・9 HOURS AGO
Newsweek

The husband was branded "controlling, disrespectful and entitled" by one Redditor. "He is putting your health and safety on a back burner."
RELATIONSHIP ADVICE・7 DAYS AGO

Megan, 35 - who has Noah, nine, Bodhi, seven, and Journey, five, with her ex-husband Brian Austin Green - loved the proposal and "thought it was beautiful and perfect". The insider told People: "She is excited to get married." The loved-up duo first started dating in May 2020 after meeting...
CELEBRITIES・4 DAYS AGO
BET

Jordin Sparks Says That Marriage Is Not For Everyone, But THIS Is Why She Married Her Husband After Prioritizing Self-Love!

Jordin Sparks is opening up about her thoughts on marriage with the ladies of The Real. Keep scrolling to hear the American Idol alum’s thoughts about tying the knot, plus learn why she married her husband Dana Isaiah. While taping Tuesday’s episode of the talk show, co-host Loni Love...
RELATIONSHIP ADVICE・5 DAYS AGO
enstarz.com

Kate Middleton reportedly started preparing for the coming of her fourth child with Prince William, a new report claimed. In the past years, royal astrologers constantly predicted that Meghan Markle and Kate would give birth to more royals soon. This year, the Duchess of Sussex already welcomed her second and youngest child with Prince Harry, Lilibet Diana.
CELEBRITIES・20 DAYS AGO
enstarz.com

Prince Charles and Camilla Parker Bowles' relationship is one of the most controversial issues of the royal family throughout their history; however, there is little-to-no information on what's happening behind closed doors. In 2014, the Duchess' son spoke out and publicly revealed his reaction to the issue; what happened?. Speaking...
CELEBRITIES・15 DAYS AGO
GlobalGrind

Head inside for some awesome throwbacks and more recent shots, as we wish the icon a blessed day.
CELEBRITIES・4 DAYS AGO
extratv

Betty White’s Cause of Death Revealed

Betty White’s death certificate has been released 11 days after her death on New Year’s Eve. In her death certificate, obtained by TMZ, White’s cause of death is listed as cerebrovascular accident, which is a medical term for stroke when blood flow in the brain is impeded by a blockage or rupture of a blood vessel.
CELEBRITIES・7 DAYS AGO
Closer Weekly

Ever since they began dating in 2013, socialite Lauren Silverman has made her fiancé, Simon Cowell, feel like one lucky guy! Although fans never imagined it would happen, the beloved TV star found his one true love and has been living a life of bliss ever since. In January...
CELEBRITIES・5 DAYS AGO
extratv

Tiffany Haddish is just one of the comedians starring in the Apple TV+ show “The Afterparty,” but right now she is remembering the ones she’s lost. “Extra’s” Cheslie Kryst spoke with Tiffany, who opened up about how she is feeling. “My career is blowing things out of the water, my life, because I’m a human, it feels like it’s in shambles, but it’s not. I’m just sad because I’ve had some losses.”
CELEBRITIES・3 DAYS AGO