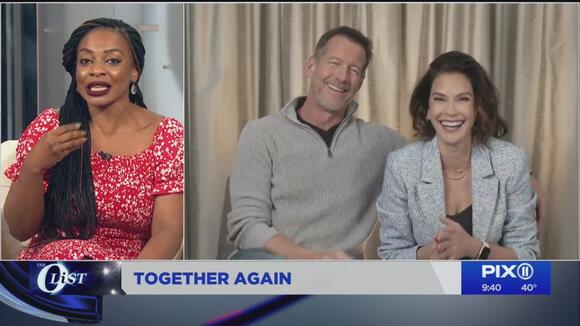 Actors Teri Hatcher and James Denton starred as love interests and then a married couple on the wildly popular TV series “Desperate Housewives.” Now, the on-screen duo is back together again for a new Hallmark Channel holiday movie.

Hatcher and Denton chatted with the PIX11 Morning News about their new film “A Kiss Before Christmas,” which Denton is also an executive producer on.

Denton revealed if it was his idea to bring his former TV wife aboard the project, while Hatcher let us know whether or not Denton was a good boss.

“A Kiss Before Christmas” airs this Sunday night, Nov. 21, on the Hallmark Channel.

He’s an actor, musician, father, husband (and vampire.) Jackson Rathbone stars in the horror – supernatural thriller “Warhunt,” which is now out in theaters and on digital and on demand.  Rathbone spoke with the PIX11 Morning News about his role and what viewers can expect.
MOVIES・6 HOURS AGO
PIX11

Laura Marano can sing, she can act and she always makes time for her besties at PIX11. Marano chatted with PIX11’s Ojinika Obiekwe on Thursday about her new Netflix film “The Royal Treatment.” The movie is out to stream now on Netflix.
MOVIES・1 DAY AGO
PIX11

Pair assaulted, robbed man after following him into apartment: NYPD

MOTT HAVEN, the Bronx — Two men followed another man into his apartment Monday evening before hitting and robbing him, police said Wednesday. The 49-year-old man was walking into a residence near East 138th Street and Brook Avenue about 6:55 p.m., police said. The two suspects — who were not known to the victim — […]
NEW YORK CITY, NY・2 DAYS AGO
SheKnows

GAC Family Ties Hallmark Star to a Four-Movie Deal — Plus, What It Means for Fans

“I’m so excited to share this next chapter.”. Fans of Days of Our Lives and General Hospital alum Jen Lilley (ex-Theresa; ex-Maxie) will be interested to know that she has just signed a multi-picture deal with GAC Media. Our sister site Deadline has learned exclusively that Lilley will headline four original movies for the network, GAC Family, over the next two years.
MOVIES・10 DAYS AGO

We love a Hallmark movie and the latest Hallmark Movies & Mysteries’ new movie, North to Home, is coming out this Sunday, January 9th. The movie stars Lyndsy Fonseca, Kimberley Sustad, Erica Durance, and Barbara Niven. In the new movie, “Suzanne McBride (Niven) is excited to spend her birthday...
MOVIES・13 DAYS AGO
The Daily South

Leave it to Hallmark Channel to come up with the perfect way for fans of The Golden Girls to celebrate Betty White on what would have been the late great's 100th birthday. In an announcement shared exclusively with Southern Living today, Hallmark revealed plans for "Honoring Betty White," a special slate of programming scheduled for Monday, January 17.
CELEBRITIES・11 DAYS AGO
CinemaBlend

Lacey Chabert has become quite the Hallmark star in recent years. The Party of Five and Mean Girls alum has been starring in Hallmark movies since 2010, and even more frequently over the last few years. In her newest trilogy of movies, The Wedding Veil, the actress worked in a photo that has a lot of meaning to her: her grandparents’ wedding day.
CELEBRITIES・10 DAYS AGO
100.5 The River

Love the feel-good holiday movies you see on Lifetime and Hallmark? Well, one is being shot in West Michigan right now!. This is a Christmas movie that aims to break the mold - "A Holiday I Do" is an LGBTQ+ inclusive Christmas film. The plot will center around Jane, a...
MICHIGAN STATE・8 DAYS AGO

Good Sam is staging its very own One Tree Hill reunion. Hilarie Burton and Bethany Joy Lenz will join Sophia Bush in an upcoming episode of the medical drama, CBS announced Wednesday, while also sharing the BTS photo below. Bush, Burton and Lenz of course starred as Brooke, Peyton and Haley on One Tree Hill, which ran for nine seasons on The WB/The CW. On Good Sam, Burton and Lenz will guest-star as Gretchen and Amy Taylor, sisters who cross paths with Sam (played by Bush) when Amy is admitted as a patient at Detroit’s Lakeshore Sentinel Hospital.  More details about the episode will...
TV SERIES・1 DAY AGO
MLive.com

How to Watch “The Perfect Pairing” Hallmark movie premiere

The Perfect Pairing premieres tonight at 8/7c. Watch this new Hallmark movie for free with Philo and FuboTV. Starring Nazneen Contractor and Brennan Elliott, The Perfect Pairing follows a budding romance at a family winery. Christina is an anonymous food critic headed to the winery to sip, eat, and pass judgement without anyone knowing her identity—but when she takes a tumble on the ice, Michael steps into her life and helps her remember what’s really important. Tune in tonight at 8/7c to watch sparks fly between this single father and wine aficionado.
MOVIES・6 DAYS AGO
Deadline

Bob Saget was “very happy and was just thrilled to be back out on the road” in the days leading up to his unexpected death at 65 on Jan. 9, his widow Kelly Rizzo said in a tearful Today show interview this morning. Saget, the Full House and America’s Funniest Home Video star, passed away after returning to his Orlando, Florida, hotel room from a stand-up performance at the Ponte Vedra Concert Hall in nearby Palm Valley. In her interview with Today‘s Hoda Kotb, Rizzo said that world events weighed heavily on Saget and that the comic “felt more compelled than ever...
CELEBRITIES・1 DAY AGO
Deadline

Extra's are needed for a Christmas movie that's being shot in the Holly Hotel in Holly, Michigan. The movie industry can be one of the hardest industries to break into, let alone make enough money to support yourself. So if you are in the market to build up a resume this is a perfect opportunity for you! They have about 25 extra roles, and about 3 small speaking roles available (so far). Hey, that's good enough for me! Especially if this is your first time acting. Smaller the role the better. Getting accustomed to how films are shot and understanding the long-drawn-out process is vital. Some movies will wait all day just to get the perfect lighting at a certain time of the day. And if you're not accustomed to that, things can drag on forever.
HOLLY, MI・14 DAYS AGO
Entertainment Times

Betty White allegedly left her $75 million estates to her pets and not to her stepchildren. In its Jan. 24 issue, National Enquirer claimed that White’s stepchildren are fuming mad at her for prioritizing her pets over them. In fact, before she passed away, they were already trying to convince the Golden Girls actress to leave her estate with them.
PETS・2 DAYS AGO
The Independent

A woman has thanked one of her fellow gym members for not staring at her as she does squats, and she is sparking a debate on social media for doing so.In a TikTok video posted on 1 January, @libbychristensen was squatting on an exercise machine, as a man was sitting on a bench behind her. @libbychristensen ty for your service kind sir #gymtok #girlwholift #YerAWizard ♬ The Golden Girls - The Main Title Theme - TV Themes “I just need to shout out this man who was behind me while it was hack squatting bc I...
WORKOUTS・1 DAY AGO
The Week

Rock star Meat Loaf reportedly died at 74 after contracting the coronavirus and becoming seriously ill. The singer, known for hit albums like Bat Out of Hell and appearances in films like Fight Club and The Rocky Horror Picture Show, died Thursday night, his agent confirmed. On Friday, TMZ reported that earlier this week, Meat Loaf was scheduled to attend a business dinner for a show he was working on, but he had to cancel because he "became seriously ill with COVID." His condition "quickly became critical," the outlet said.
PUBLIC HEALTH・8 HOURS AGO
PIX11

Baby girl shot in the face in the Bronx, police say; Adams calls attack ‘a wake up call’

JEROME PARK, the Bronx (PIX11) — A baby girl was shot in the face in the Bronx on Wednesday, police said. The 11-month-old girl was in a parked car with her mother near Valentine Avenue and East 198th Street when an unidentified suspect chased another unidentified individual and opened fire, striking the baby, officials said. […]
BRONX, NY・1 DAY AGO
E! News

Watch: Dakota Johnson Celebrates 32nd Birthday: Live From E! Rewind. Dakota Johnson is definitely used to having her picture taken—but as far as her baby pictures being out there? She may be fifty shades of annoyed. Although the 32-year-old technically has an official Instagram account, she isn't active on...
CELEBRITIES・1 DAY AGO
People

Rachel Lindsay has had to endure a lot following her headline-making Extra interview with former Bachelor host Chris Harrison. As part of her duties as an Extra correspondent, Lindsay — who starred on The Bachelorette in 2017 — interviewed Harrison, 50, last February about Matt James' Bachelor season. Harrison sparked backlash for making controversial comments in defense of then-contestant Rachael Kirkconnell's past racist actions before she was on the show. (Harrison apologized soon after.)
CELEBRITIES・2 DAYS AGO