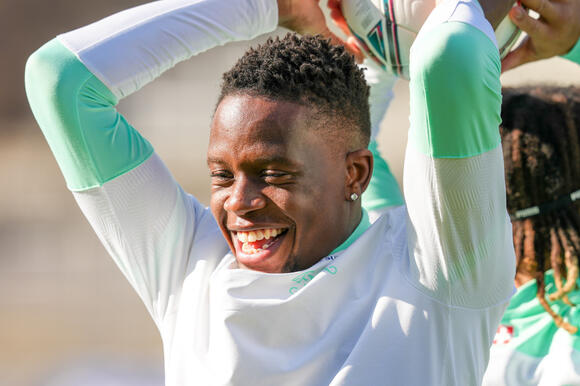 With club captain Fernandinho in the twilight of his trophy-laden playing career, the Etihad hierarchy could soon enter the market for a new central midfielder, as they try and find a suitable replacement for the Brazilian veteran.

Despite Rodri now being the preferred option in the holding midfield role for Pep Guardiola, the Manchester club would likely want added depth in the number six position - which is one of the most important in the Guardiola system.

Borussia Mönchengladbach midfielder Denis Zakaria is one of the many names that has been linked to the Premier League champions in recent months.

The 24-year-old has attracted interest from a host of elite clubs in recent season on the back of some impressive performances for the Bundesliga outfit and the Swiss National Team.

As per Italian outlet Calciomercato, whose information has been translated and relayed by Sport Witness, Manchester City and Liverpool are ‘lined up’ for a swoop for Zakaria, who has made 10 appearances across all competitions for Mönchengladbach this season.

Juventus, who are also interested in the holding midfielder, are said to be not ‘scared’, and have already contacted Zakaria’s agent, however there is no mention of any talks being held between the Bianconeri and the Bundesliga club.

However, Mönchengladbach are said to be wanting a hefty fee for the player, despite his contract expiring at the end of the 2021/22 campaign, which could open up a possible move in January for interested sides.

Barring a severe injury crisis, it remains highly unlikely that City will make an offer for Zakaria in January, as mid-season purchases are a rare occurrence at the Etihad Stadium.

In recent seasons, the only January signing of note was when Manchester City brought in Aymeric Laporte in 2018 when a number of key defenders were suffering from injury.

Though Rodri has been in a rich vein of form for Pep Guardiola's side since the start of the campaign, Tchouameni could be brought in to provide cover for Fernandinho, who turns 37 in May.

James McAtee continues to turn heads with his mesmeric displays at youth level, emerging as Manchester City Under-23’s saviour after scoring the winner in their 1-0 win against Chelsea on Monday night. The Salford-raised midfielder is the Premier League 2 top scorer at present, with 14 goals in 18...
PREMIER LEAGUE・2 DAYS AGO
CityXtra

Manchester City are known to have been in the search for a left-back for a couple of seasons. While the likes of Fabian Delph and Oleksandr Zinchenko have deputised well in the position, following a transformational education from Pep Guardiola, the club have been in dire need of a specialist in the role.
PREMIER LEAGUE・2 DAYS AGO
CityXtra

Julian Alvarez’s potential arrival at the Etihad Stadium could prove to be a massive coup for Manchester City, as the Premier League champions' search for a solution in the striker position continues. The Argentine forward, often compared to the recently retired Manchester City legend Sergio Aguero, has been one...
PREMIER LEAGUE・1 DAY AGO
CityXtra

Despite Joshua Wilson-Esbrand making just one appearance so far this season for Manchester City's first-team squad, the promising young left-back is held in high regard by the majority of the club's fanbase. This admiration comes as a result of his impressive debut against Wycombe Wanderers in the Carabao Cup earlier...
PREMIER LEAGUE・2 DAYS AGO

The search for Europe's brightest prospects follows a similar trend set by Manchester City and the City Football Group in South America, where the football conglomerate has set a reputation for being the first to emerging talents. That search in South America most recently took them to River Plate's Julian...
PREMIER LEAGUE・1 DAY AGO
Tribal Football

Manchester United and Liverpool are distancing themselves from moves for Borussia Monchengladbach midfielder Denis Zakaria. The defensive midfielder was highly rated among European clubs at one stage of his career. However, injury issues and a loss of form have cooled the interest of many suitors. Fabrizio Romano reports that even...
SOCCER・2 DAYS AGO
Yardbarker

A comprehensive round-up of all the latest Manchester City transfer news and gossip from across the globe, as we enter the final week of the January transfer window. Julian Alvarez to Manchester City should be announced before Friday. (Diario Ole, Sport Witness) Pep Guardiola and Manchester City will wait for...
PREMIER LEAGUE・1 DAY AGO
ESPN

The 2022 January transfer window is open (find out when it closes here), and there's plenty of gossip swirling about who's moving where. Transfer Talk brings you all the latest buzz on rumours, comings and goings and, of course, done deals!. TOP STORY: Man City, Liverpool to move for Juve...
PREMIER LEAGUE・19 HOURS AGO

It’s fair to say that Manchester City have been in a league of their own so far this season. Sitting nine points clear at the top of the Premier League table and only recently seeing an end to their incredible 12-game winning streak, Manchester City have swatted past teams without the presence of a natural striker.
PREMIER LEAGUE・3 HOURS AGO
Tribal Football

Manchester City have made a bumper pre-contract offer to Juventus striker Paulo Dybala. Off contract in June, Dybala is free to sign a pre-contract with any foreign club ahead of leaving Juve for nothing at the end of the season. La Gazzetta dello Sport says City have come forward and...
PREMIER LEAGUE・10 HOURS AGO
Daily Mail

A flurry of reports over the past week have seen Argentina international Julian Alvarez be heavily linked with sealing a move to Manchester City ahead of the transfer deadline on January 31st before being loaned back to River Plate for the remainder of the campaign. While Alvarez's comparisons to former...
PREMIER LEAGUE・5 HOURS AGO

Amid Manchester City’s ongoing search for a new striker following Sergio Aguero's departure last summer, Dusan Vlahovic has been heavily speculated with a potential move to the Etihad Stadium after refusing to extend his existing deal at the Artemio Franchi Stadium past 2023. Apart from being a lethal goalscorer,...
PREMIER LEAGUE・2 DAYS AGO
The US Sun

MANCHESTER UNITED and Liverpool are reportedly pulling out of the scramble to sign Denis Zakaria. The Red Devils have spoken to the Borussia Monchengladbach star's agents but are unlikely to make a bid, according to Fabrizio Romano. And the timing is apparently wrong for the Reds, who do not want...
PREMIER LEAGUE・2 DAYS AGO
CityXtra

It was recently confirmed by none other than transfer expert Fabrizio Romano this week that Julian Alvarez’s move to Manchester City from Argentine giants River Plate was all but done. With a report claiming that the official announcement for the Argentine international would be made before Friday of this...
PREMIER LEAGUE・3 HOURS AGO
FanSided

Liverpool and Manchester City are on high alert following the news Juventus star, Paulo Dybala, will not be renewing his contract with the Old Lady; his current deal runs out at the end of the season. Paulo Dybala, who is now eligible to talk to clubs outside of Italy due...
PREMIER LEAGUE・3 HOURS AGO
CityXtra

While Pep Guardiola has admitted previously that Manchester City are highly unlikely to announce any fresh incomings in January despite the ongoing speculation around the imminent arrival of Julian Alvarez, the Sky Blues could still send a few academy youngsters on loan till the summer. Cole Palmer, 19, has been...
PREMIER LEAGUE・2 DAYS AGO
CityXtra

Manchester City were finally held in their tracks after going on an incredible 12-game winning run in the Premier League as Southampton held the league leaders with a spirited display at St. Mary's on Saturday evening. The Saints took the lead in less than 10 minutes, as Kyle Walker-Peters' brilliant...
PREMIER LEAGUE・2 DAYS AGO
CityXtra

After their failed pursuit of Tottenham forward Harry Kane in the summer transfer window, Manchester City’s title credentials were questioned due to the absence of a natural striker within their squad. However, Pep Guardiola’s use of a false-nine system has sprung fans and pundits alike by surprise, with his...
PREMIER LEAGUE・2 HOURS AGO
CityXtra

With Julian Alvarez expected to sign a five-year contract with Manchester City in the coming days, it has been reported that the 21-year old will join the club in the upcoming summer. There is an understanding in some quarters that River Plate's success in the Copa Libertadores could determine when...
PREMIER LEAGUE・1 DAY AGO