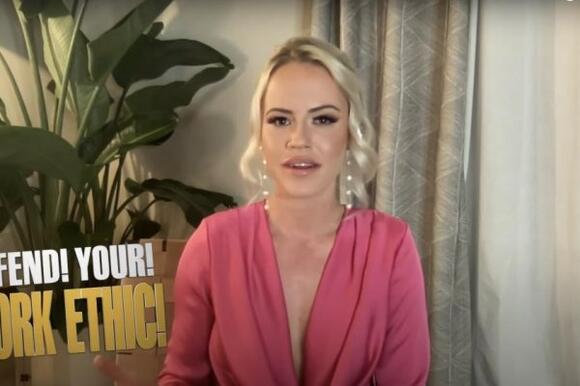 The television personality responded to 2nd steward Fraser Olender's criticisms of her work during Monday's episode of Watch What Happens Live.

Chase was first asked about Olender's claims on WWHL last week that her tone toward him was cold and blunt.

Chase also reacted to Olender's comment that she could improve as a leader by doing some work by calling the remark "unjust."

"Definitely a little unjust, and I think once Fraser becomes a chief stew he'll understand it a little more," she responded.

Chase said she can "understand" Olender's frustration that she was pulling him in too many directions during the first charter.

"He came off of a 90-meter boat where he usually only has two guests on at a time. He's not used to having eight guests being on charter and have to be a stew on a smaller boat," Chase said.

"On a smaller boat, you have to wear many hats -- you have to jump through service, go back and heads, go back to helping Rachel [Hargrove] do some laundry -- you have to be all over the place, and if you can't handle that, maybe you shouldn't be on a charter yacht," she added.

Below Deck is a reality series that follows the crew of a superyacht during charter season. The show is in its ninth season on Bravo and also stars Captain Lee Rosbach, Eddie Lucas, Jessica Albert, Jake Foulger, Rayna Lindsay and Wes O'Dell.

There are some people who are just synonymous with their job. Tom Brady is to footballing as Jeff Probst is to hosting. And without a doubt, the name Kate Chastain is synonymous with yachting and the reality series Below Deck. The notoriously quick-witted chief stewardess on Bravo show is no longer part of that industry, though, after easing into early retirement at age 37. She explained more about why exactly she could never return to “real” yachting in the future.
CELEBRITIES・1 DAY AGO
realitytitbit.com

Who is Kaylee Milligan and is she Below Deck's new stew?

Kaylee Milligan has been rumored as the potential new Below Deck stew, who may be replacing Jessica Albert after she left the yacht. Let’s get to know who Kaylee is as she faces speculation. The My Seanna on-board crew were left with one empty space when Jessica suddenly up...
CELEBRITIES・14 DAYS AGO
Reality Tea

It seems a lot of discord on Below Deck Season 9 was avoidable.  Well, first off chief stew Heather Chase should have known better than to say the ‘N’ word in any context.  Second, couldn’t one person have asked deck hand Rayna Lindsey how she wanted the situation handled?  Between Heather and First Officer Eddie Lucas, […] The post Rayna Lindsey Shares Her Disappointment In Eddie Lucas Over His Reaction To Heather Chase Using The “N” Word On Below Deck appeared first on Reality Tea.
TV SERIES・7 DAYS AGO
Reality Tea

Rachel Hargrove’s professional relationship with Captain Lee Rosbach has come a long way since she told him to “eat my cooter” during Season 8 of Below Deck. After reading through an outrageous preference sheet, the chef became irate and abruptly quit, leaving the crew scrambling mere hours before the next charter. Rachel did return the […] The post Below Deck Star Captain Lee Rosbach Praises Rachel Hargrove As “Unequivocally One Of The Best Chefs” He Has Ever Worked With appeared first on Reality Tea.
TV SERIES・5 DAYS AGO

Below Deck Sailing Yacht Season 2 really had a solid cast.  Both the deck crew and interior teams were highly competent and enthusiastic. A great group of personalities too.  And there was little drama within the team, save for Bosun Gary King’s incessant pursuance of Alli Dore. Everyone was rooting for Second Stew Dani Soares.  […] The post Below Deck Sailing Yacht Star Dani Soares And 7-Month Old Daughter Both Have Covid appeared first on Reality Tea.
BOATS & WATERCRAFTS・8 DAYS AGO
USA TODAY

Olivia Jade talks admissions scandal, defends work ethic: 'I did put in a lot of work'

During an episode of her podcast Monday, YouTuber Olivia Jade Giannulli addressed a common criticism regarding her personal work ethic.
CELEBRITIES・11 DAYS AGO
Popculture

Yellowjackets has become one of the must-see shows of the year over the course of its first season, particularly after the explosive finale that sent viewers into a tailspin. A major part of the show's success is due to Melanie Lynskey's performance as Shauna. With her quietly simmering portrayal of a woman who has gone through immense trauma (Surviving In the wilderness for 19 months! Potentially eating her friends!) and how that's left her with seriously arrested development, Lynskey has been a major powerhouse onscreen. Despite her talent, Lynskey faced pushback from producers about her weight.
TV SHOWS・2 DAYS AGO
CinemaBlend

Captain Sandy Yawn is, without a doubt, a pillar of the Bravo network’s Below Deck franchise. Her upbeat, team-oriented approach to managing the stews and deckhands aboard the show’s super-yachts has singlehandedly helped them through many issues. But the captain – who has earned the respect of fans as well for being a badass leader in a traditionally male-dominated profession – is hurting at the moment. Her brother unfortunately just passed away at age 55, and she paid tribute and wished a mournful “Godspeed” to him in her statement on the matter.
CELEBRITIES・2 DAYS AGO

Courtney Skippon Says It Be “Embarrassing” To Return To Below Deck

Whether or not you can remember the plot details of Below Deck‘s 7th season (Hello elephant sanctuary! Alexis Bellino making out with new boo! Everyone hating on Kate Chastain!), if you don’t remember Courtney Skippon you prolly weren’t watching. Courtney was the third stew whose sardonic take on yachting and yachties in particular made for […] The post Courtney Skippon Says It Be “Embarrassing” To Return To Below Deck appeared first on Reality Tea.
TV & VIDEOS・4 DAYS AGO
HollywoodLife

Jaden Smith Shows Off 10-Lb. Weight Gain After Family Said He Was ‘Wasting Away’ — Watch

Jaden Smith appeared on the new episode of ‘Red Table Talk’ to share how his healthy weight gain became possible after his family held an intervention for his food issues. Jaden Smith, 23, has come a long way from when his family staged an intervention for his eating issues in 2019. The Smith family revealed in September of that year on Red Table Talk that they stepped in after noticing Jaden was “wasting away” because of a lack of nutrients. Now, over two years later, Jaden has healthily gained 10 pounds, which he discussed on the Dec. 22 episode of Red Table Talk. He told his mom Jada Pinkett Smith, 50, and grandmother Adrienne Banfield-Norris, 68, that he’s “definitely” feeling better since the intervention and subsequent weight gain.
CELEBRITIES・25 DAYS AGO
shefinds

You Won’t Believe What Kanye West Just Announced—Kim Must Be Furious!

Kanye West and Kim Kardashian may have called it quits back in February 2021, but it’s no secret that Ye still had hopes of reconciliation with his famous ex. Evidently the rapper isn’t ready for Kardashian to forget about their romance either after news broke that the 44-year-old recently purchased the mansion directly across the street.
CELEBRITIES・13 DAYS AGO
arcamax.com

Megan, 35 - who has Noah, nine, Bodhi, seven, and Journey, five, with her ex-husband Brian Austin Green - loved the proposal and "thought it was beautiful and perfect". The insider told People: "She is excited to get married." The loved-up duo first started dating in May 2020 after meeting...
CELEBRITIES・5 DAYS AGO

Ben Affleck and Jennifer Lopez are the couple we never knew we needed this year! Although they are 2021 couple goals and appear to be living their best lives right now, things weren’t always so peachy with the former exes who initially dated between 2000 and 2004! If you always wanted to know more details about their widely-publicized split and why they called off their engagement just days before their wedding in 2004 then you’re in luck, as the 49-year-old The Last Duel actor just revealed the real reason for them going their separate ways 17 years ago!
CELEBRITIES・21 DAYS AGO
Hello Magazine

The Queen made a rare comment about her great-granddaughter Lilibet Diana Mountbatten-Windsor during her annual Christmas message to the nation. During the speech, which aired at its usual time of 3pm on Christmas Day, the monarch gave special mentions to the new additions to the royal family this year, which includes the Duke and Duchess of Sussex's daughter, who was born in June 2021. Her Majesty remarked at one point in the speech: "Adults, when weighed down with worries, sometimes fail to see the joy in simple things, where children do not," before going on to discuss the "young children" her family have welcomed this year.
U.K.・23 DAYS AGO
DesignerzCentral

Who is Rose Hanbury? The woman involved in the Prince William Cheating Rumours

Back in 2019, Prince William was accused of cheating on his wife Kate with her close friend, Rose Hanbury. So who exactly is the woman at the center of these allegations?. Two years ago, rumors of a big fallout between Kate and her former best friend, Rose Hanbury, started circulating, thanks to a report published by The Sun.
CELEBRITIES・19 DAYS AGO
Closer Weekly

Ever since they began dating in 2013, socialite Lauren Silverman has made her fiancé, Simon Cowell, feel like one lucky guy! Although fans never imagined it would happen, the beloved TV star found his one true love and has been living a life of bliss ever since. In January...
CELEBRITIES・5 DAYS AGO
The Independent

A photograph has emerged showing Carrie Johnson flouting social distancing rules despite the public being warned at the time that they should keep their distance from anyone they do not live with.In the photo, the prime minister’s wife can be seen embracing old school friend Anna Pinder at a private members’ club in Covent Garden, where they were celebrating the latter’s engagement.In the picture, published by The Telegraph, Ms Johnson is seen hugging her friend while they sat side-by-side on a sofa on the roof terrace of The Conduit. Ms Johnson has one of her legs draped over her friend...
PUBLIC HEALTH・2 DAYS AGO
Ok Magazine

Sister Wives stars Christine and Meri Brown are in hot water with some of their fans due to their ties to Lularoe, a clothing company that has recently been mired in controversy. Article continues below advertisement. Both tv personalities list themselves as a "Lularoe Retailer" on their Instagram accounts and...
CELEBRITIES・2 DAYS AGO