Mineral from deep inside Earth found on surface for first time: ‘It shouldn’t be there’ 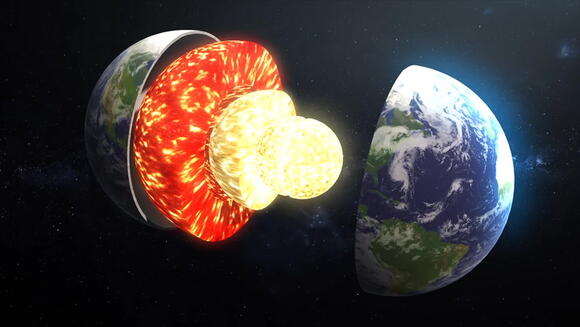 Scientists have discovered for the first time a new mineral encased within a diamond from over 600km deep within the Earth’s lower mantle, which they say should’ve fallen apart before reaching the surface.

Earth ’s lower mantle is the area between the planet’s core and crust.

This was a very unlikely discovery as minerals usually fall apart before they reach the Earth’s surface, unable to retain their structure outside of a high-pressure environment, say the researchers, including those from the University of Nevada in las Vegas (UNLV), US.

The newly discovered mineral - named davemaoite - could survive such tremendous pressure change as it was encased within a diamond , says the team’s study published on Thursday in the journal Science .

“I think we were very surprised. We didn’t expect this,” UNLV mineralogist and study co-author Oliver Tschauner , said in a statement.

“For jewellers and buyers, the size, color, and clarity of a diamond all matter, and inclusions – those black specks that annoy the jeweler — for us, they’re a gift,” Dr Tschauner added.

Davemaoite, the scientists say, is a calcium silicate compound, CaSiOâ‚ƒ-perovskite that showed up as infinitesimal small dark specks in a diamond unearthed in the 1980s.

It arrived on the surface decades ago in Botswana via the Orapa mine — the world’s largest diamond mine by area.

A gem dealer later sold the diamond in 1987 to a mineralogist at the California Institute of Technology in Pasadena.

Dr Tschauner and his team then got their hands on the diamond, and analysed its interior structure using a new suite of scientific tools.

They named the new mineral “davemaoite” after Ho-kwang “Dave” Mao, a geophysicist who developed many of the techniques that Dr Tschauner and his team use today.

In the deep mantle, the researchers say, davemaoite takes on a role similar to that of garnet in the upper mantle with a chemistry that allows the minerals to host many elements that are incompatible in upper-mantle minerals.

They found that the structure of davemaoite enables it to host major heat-producing elements, including uranium, and thorium which affect heat generation in Earth’s lower mantle.

The scientists say the mineral may have formed between 660 and 900 km below the Earth’s surface, adding that the discoveries of more such minerals will allow geologists to model the evolution of the Earth’s mantle in greater detail.

They say the finding also marks one of two ways in which highly pressurised minerals are found in nature – either from deep within Earth’s interior or inside meteorites.

I have several mineral specimens with vugs in them. I have never had them analyzed so I don't know what they are made of but this is a very interesting article for me. You would have to be a geologist to find interest in this article

The earth is in constant change whether it is the weather. or environmental factors it is no surprise to me that this was found.

exploring outer space is great. we don't know everything about our own planet. the oceans or land!!

E.T.s may be headed toward Earth, but are we ready for them?

Twenty years from now we might get a call from aliens. In 2017, a powerful radio transmission was aimed at exoplanet GJ 273b, thought to be able to support life. Its message, sent by the alien-hunting group Messaging Extraterrestrial Intelligence International, contained instructions on how to understand Earthling math, music and time. If it lands on intelligent alien ears once it arrives in about a decade, E.T. now has our number.
ASTRONOMY・17 DAYS AGO
d1softballnews.com

An ASTEROID will touch the EARTH in a few hours and it will be possible to see it!

The European Southern Observatory’s Very Large Telescope—yes, that’s actually the name—has discovered a brand-new world. The planet in question is located 325 light-years away from Earth, in the Centaurus constellation. The planet itself orbits b Centauri, a two-star system that you can often see with the naked eye. Scientists say that this star system is the hottest planet-hosting system that we know of. It is now known as b Centauri (AB)b, or b Centauri b. Additionally, scientists found that the new world orbits its star over 100 times the distance between Jupiter and the Sun.
ASTRONOMY・29 DAYS AGO
Interesting Engineering

Researchers at the International Centre for Radio Astronomy Research (ICRAR) have found a mysterious object in space that has been sending out radio waves approximately three times an hour, according to an institutional press release. The object was first spotted in March 2018 and has been observed ever since to understand its origins.
ASTRONOMY・2 DAYS AGO

A supervolcano eruption in the U.S. could be 2000 times larger than that of Mount St. Helens

Mount St. Helens eruptionPicture by Donald A. Swanson; Wikimedia Commons; Public Domain image. A supervolcano is defined by its Volcanic Explosivity Index (VEI) which is measured from a magnitude of 0 to 8. The magnitude of 8 represents the largest eruptions in history and supervolcanoes tend to erupt at this magnitude.
20 DAYS AGO
The Independent

Scientists have found a new “strange metal” that behaves in ways they can’t quite understand.But the discovery could be key to finding out an explanation for a phenomenon that has troubled researchers for decades.Finally solving that problem could lead to a variety of breakthroughs, such as lossless power grids and quantum computers. It also appears to be linked to some of the fundamental constants of the universe, and so could help shed light on how the cosmos actually works.Most materials, such as copper and silver, behave in predictable and well understood ways, and scientists understand how their electrical conductance...
CHEMISTRY・16 DAYS AGO
ScienceAlert

As it's the foundation for all life on Earth, discovering carbon on other planets always gets scientists excited – and the Curiosity Rover on Mars has found an unusual mix of the chemical element that could hypothetically point to the existence of alien life. That's by no means certain,...
ASTRONOMY・10 DAYS AGO
nationalgeographic.com

Photographs By Luca Locatelli AND ESRF, Human Organ Atlas. When Paul Tafforeau saw his first experimental scans of a COVID-19 victim’s lung, he thought he had failed. A paleontologist by training, Tafforeau had been laboring with a team strewn across Europe for months to turn a particle accelerator in the French Alps into a revolutionary medical scanning tool.
SCIENCE・2 DAYS AGO

Scientists are baffled by the glowing snow that has appeared in the Russian Arctic. There's nothing new about the fact that some copepod species glow, but land-based light installations are much less prevalent. Glowing Snow in Russian Arctic. According to IFLScience, the light-emitting substrate coelenterazine is produced chemically in copepods,...
ASTRONOMY・14 DAYS AGO
24/7 Wall St.

This Is the Oldest Thing in the World

A 24/7 Tempo analysis reveals that a mineral is the oldest known thing in the world.
SCIENCE・9 DAYS AGO
The US Sun

A MYSTERIOUS object unlike anything that astronomers have seen before has been discovered in our "galactic backyard". In research published Wednesday, scientists described the strange, spinning mass, which is said to release an enormous burst of energy every 20 minutes. That radiation, which crosses the line of sight of telescopes...
ASTRONOMY・2 DAYS AGO
iHeartRadio

Scientists are reeling after they spotted a mysterious object that releases huge blasts of energy three times an hour. Although the unknown object has yet to be properly identified, it has been reported to be 4,000 lightyears away. “This object was appearing and disappearing over a few hours during our...
ASTRONOMY・2 DAYS AGO
IFLScience

Blood pooling in the deep, frothy waters off Western Australia alerted researchers to a grisly scene unfolding before their eyes back in 2019. Ahead, they saw a pod of killer whales attacking a blue whale, stripping it of flesh and exposing bone until eventually, the carcass sank. While such a bloody demise may be hard for some to stomach, the remarkable behavior on the part of the orca pod represented a significant one: the first-ever recorded instance of killer whales bringing down Earth’s largest animal.
ANIMALS・1 DAY AGO
ScienceAlert

A new image of the heart of the Milky Way is revealing mysterious structures we've never seen before. Taken using the ultra-sensitive MeerKAT radio telescope in South Africa, the images show nearly 1,000 strands of magnetic filaments, measuring up to 150 light-years in length, in surprisingly neat and regular arrangements.
ASTRONOMY・2 DAYS AGO
USA TODAY

Earth's interior is cooling faster, according to a new study, prompting questions about thermal evolution and longevity of the planet's habitability.
ASTRONOMY・9 DAYS AGO
AFP

A chunk of a SpaceX rocket that blasted off seven years ago and was abandoned in space after completing its mission will crash into the Moon in March, experts say. The rocket was deployed in 2015 to put into orbit a NASA satellite called the Deep Space Climate Observatory (DSCOVR). Since then, the second stage of the rocket, or booster, has been floating in what mathematicians call a chaotic orbit, astronomer Bill Gray told AFP Wednesday. It was Gray who calculated the space junk's new collision course with the Moon.
ASTRONOMY・2 DAYS AGO
The Independent

With 192 lasers and temperatures more than three times hotter than the center of the sun, scientists hit — at least for a fraction of a second — a key milestone on the long road toward nearly pollution-free fusion energy. Researchers at the National Ignition Facility at the Lawrence Livermore National Lab in California were able to spark a fusion reaction that briefly sustained itself — a major feat because fusion requires such high temperatures and pressures that it easily fizzles out. The ultimate goal, still years away, is to generate power the way the sun generates heat, by smooshing...
INDUSTRY・2 DAYS AGO
Newsweek

The amount of energy released from the recent blast is comparable to other major eruptions throughout Earth's history.
SCIENCE・2 DAYS AGO
Cosmos

British researchers have uncovered what they believe to be the earliest written account in England of a bizarre – and poorly understood – phenomenon known as ‘ball lightning’, chronicled in a medieval text written by a Benedictine monk who lived just under 1000 years ago. What...
SCIENCE・2 DAYS AGO