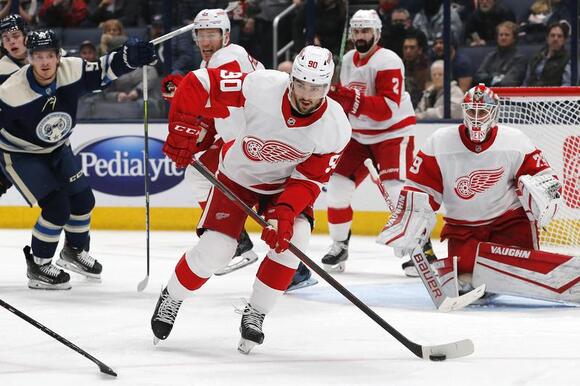 Zach Werenski scored with 79 seconds remaining in regulation to give the Columbus Blue Jackets the lead in a 5-3 win over the visiting Detroit Red Wings on Monday.

After Yegor Chinakhov’s first career NHL goal equalized for the Jackets at 15:42 of the final frame, the stage was set for Werenski’s game-winner. The defenseman’s slap shot from just inside the blue line found its way past traffic in front of the net for Werenski’s third goal of the season.

Chinakhov had a goal and an assist for the Blue Jackets, and Gustav Nyquist had two assists. Boone Jenner, Adam Boqvist and Alexandre Texier also scored for Columbus, with Texier contributing an empty-netter in the final three seconds of play.

Dylan Larkin also had a goal and an assist for the Red Wings. Michael Rasmussen scored Detroit’s other goal.

At 14:45 of the first period, the Blue Jackets couldn’t clear a loose puck in front of their net. Raymond got a stick on the puck and threaded a pass to an open Larkin on the left side, and Larkin converted for the opening score.

It was Larkin’s seventh goal of the season, and his fourth goal in as many games.

Elvis Merzlikins looked generally sharp in stopping 24 of 27 shots, but the Columbus goalie was visibly dismayed after Rasmussen’s goal in the second period. Rasmussen fired a seemingly innocuous shot from outside the circle that beat Merzlikins for the Wings forward’s first goal of the season.

Trailing the Red Wings 2-0 despite a big advantage in shots, the Jackets’ pressure eventually paid off with two quick goals later in the second period. Jenner scored his team-leading seventh goal at 13:07 of the second frame, and Boqvist followed up with the equalizer less than two minutes later.

Boqvist was back in the Columbus lineup after missing seven games due to injury. Acquired in an offseason trade with the Chicago Blackhawks, Boqvist’s goal was his first in a Blue Jackets uniform.

The NHL is using the previously planned Olympic break as a period to make up games that were postponed by COVID-19 outbreaks earlier this season.
NHL・1 DAY AGO
97.1 The Ticket

Where Raymond goes from here is up to him. He has the inside track for the Calder, and he’s on the path toward a long and successful career in Detroit.
NHL・1 DAY AGO
97.1 The Ticket

At 5’10, Smith doesn’t boast the size of his 6’2 younger brother, but he does have a more proven offensive track record. He also plays center.
NHL・1 DAY AGO
The Hockey Writers

The “NHL Talk” column is your daily go-to for the best hockey topics with quotes from your favourite THW writers. Listen to the THW Podcast, available on iHeartRadio and wherever you listen to podcasts, every weekday (Monday to Friday). In this edition of NHL Talk, the Detroit Red...
NHL・2 DAYS AGO

Avs forward Nazem Kadri is headed to the NHL All-Star Game after all after getting voted in by fans through the “Last Men In” vote.
NHL・2 DAYS AGO
KREX

Toronto Maple Leafs defenseman Jake Muzzin will miss the team’s visit to New York after being diagnosed with a concussion.
NHL・2 DAYS AGO
Sportsnaut

Anze Kopitar had a power-play goal and Jonathan Quick made 23 saves in the Kings' 4-1 loss to the Avalanche. L.A.'s Quinton Byfield makes season debut.
NHL・6 HOURS AGO
Sportsnaut

The NHL levied $5,000 fines against Montreal’s Jonathan Drouin and Phillip Danault of the Los Angeles Kings on Wednesday, the
NHL・1 DAY AGO
USA TODAY