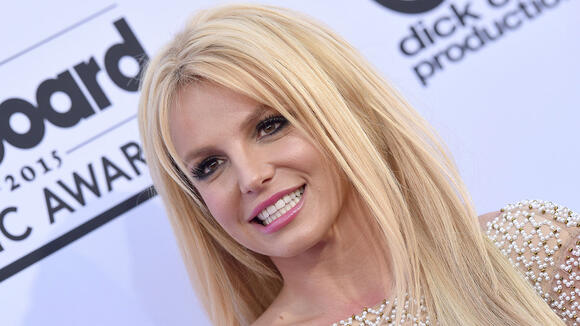 Britney Spears is on cloud 9 and celebrating with champagne after an L.A. judge terminated her 13-year conservatorship last week.

Taking to social media on Monday, Spears reflected on experiencing her first “amazing weekend” free from the conservatorship.

“I felt like I was on cloud 9 the whole time. I actually got my first glass of champagne at the most beautiful restaurant I’ve ever seen last night,” she wrote on Instagram.

The singer also noted that she’s able to celebrate even more amid her upcoming birthday — Spears will turn 40-years-old on Dec. 2 — and expressed thanks to attorney Mathew Rosengart, whom she hired in July after getting court approval to hire her own attorney , for helping change her life.

“I’m celebrating my freedom and my B day for the next two months,” she wrote with exclamation marks.  “I mean after 13 years…I think I’ve waited long ENOUGH !!!! I’m so happy my lawyer Mathew Rosengart came into my life when he did… he has truly turned my life around… I’m forever thankful for that!!!!”

Spears also thanked the fans who celebrated outside of the L.A. courthouse following the ruling: “What a sight seeing so many people celebrating my victory… I love my fans so much…so thank you !!!!”

After her conservatorship was terminated on Nov. 12, Spears described the day as the “best day ever” and shared a video of fans celebrating. An L.A. judge granted a petition to terminate the 13-year arrangement, ruling “effective today the conservatorship of Ms. Britney Jean Spears is no longer required.”

During a June 23 hearing, Spears broke her silence in an emotional testimony where she detailed the hardships she has endured throughout the decades-long conservatorship. She voiced that it was her “wish” and “dream” for the conservatorship to end. She also expressed hopes for justice and that her father be charged with “conservatorship abuse.”

The next hearing is set for Jan. 19 to address pending accounting and other lingering issues. Outside the courtroom Friday Rosengart commented on what was next for Spears: “What’s next for Britney — and this is the first time that this can be said for about a decade — is up to one person: Britney.”

Kathy Griffin says that when she asked for a pay raise ahead of CNN’s 2016 New Year’s Eve show, CNN president Jeff Zucker denied it and then fired her — before eventually rehiring her following a 20 percent cut in her pay. In a feature published by The New York Times, Griffin opened up about her attempt at pay negotiation, which quickly soured. Ten days before the network’s New Year’s Eve show, which Griffin was then co-hosting with Anderson Cooper, she says she reached out to the president of CNN, expressing that she was “carrying more of the prep work than...
CELEBRITIES・2 DAYS AGO
The Hollywood Reporter

Hollywood is paying tribute to Louie Anderson, the iconic stand-up comedian who died on Friday at 68. The comic, game show host and Emmy-winning actor and author, who memorably starred as Christine Baskets, the mother to Zach Galifianakis’ character in the FX series Baskets, died in a hospital in Las Vegas due to complications from cancer. He had been undergoing treatment for a type of non-Hodgkin lymphoma. “We are so deeply saddened by the passing of our dear friend, Louie Anderson,” said FX in a statement to The Hollywood Reporter. “For four wonderful seasons, Louie graced us and fans of Baskets with...
CELEBRITIES・1 DAY AGO
The Hollywood Reporter

Adele Reveals Postponement of Las Vegas Residency: “We’ve Been Up Against So Much”

Adele is rescheduling her Las Vegas residency that was set to kick off Jan. 21. In a video shared on her social media channels Thursday — the day before the residency was due to start — the singer tearfully announced the news and explained that due to delivery delays and crewmembers testing positive for COVID-19, plans for the show have been disrupted. “I’m so sorry but my show ain’t ready,” the singer said. “We’ve tried absolutely everything that we can to put it together in time and for it to be good enough for you but we’ve been absolutely destroyed by delivery delays...
LAS VEGAS, NV・2 DAYS AGO
Register Citizen

Britney Spears says she was bothered by an interview her younger sister Jamie Lynn gave on Good Morning America — and says she had to watch it while having a 104-degree fever. On Thursday, the pop singer shared a lengthy statement on Twitter accusing her family of ruining her...
CELEBRITIES・9 DAYS AGO

Is Jamie Lynn Spears’ Net Worth $6 Million? Here’s How She Makes Her Money

Britney Spears may be free from her conservatorship, but that doesn’t mean the drama is over. As of late, the former pop princess’ younger sister, Jamie Lynn, has been making headlines for her explosive new memoir, “Things I Should Have Said,” in which she calls Britney’s behavior “paranoid” and “erratic” growing up. Despite claims to the contrary coming from Britney, in a recent interview while promoting the tell-all book on “Good Morning America,” Jamie Lynn said, “I’ve always been my sister’s biggest supporter.” The 30-year-old mom-of-two, who is 10 years younger than Britney, also insists she had nothing to do with...
CELEBRITIES・2 DAYS AGO
Insider

Britney Spears' lawyer Mathew Rosengart told reporters that her father wasn't owed any more funds from an estate that he "pillaged."
CELEBRITIES・2 DAYS AGO
ETOnline.com

Despite any past drama, Britney Spears has Christina Aguilera's full support. Aguilera appeared on The Enrique Santos Show on Friday and was asked if she had reached out to Spears since the "Toxic" singer ended her 13-year conservatorship, and Aguilera shared words of support. Aguilera, 41, and Spears, 40, have...
CELEBRITIES・1 DAY AGO
E! News

Oops... she did it again! Britney Spears just unveiled her new makeover. The pop star, 40, revealed her purple hair 'do on Instagram, flaunting her newly colored locks for her 39 million followers to see. "Here's me with purple hair," she wrote along with shrugging emojis. What inspired the sudden...
CELEBRITIES・2 DAYS AGO

Britney Spears Gains Control of Her Money, Will Not Be Paying Father's Legal Fees—Judge

Judge Brenda Penny refused to allow funds from the singer's conservatorship to be allocated for her father, Jamie Spears, to pay his legal fees.
CELEBRITIES・2 DAYS AGO
StyleCaster

Judging by Jamie Lynn Spears’ response to Britney Spears’ cease and desist letter, things are beginning to get even uglier between these feuding sisters. The Netflix star’s lawyer, Bryan Freedman, just sent a letter to Britney’s legal team dismissing their claims about Jamie Lynn’s new book, Things I Should Have Said. In the letter, which was obtained by TMZ and Page Six on January 19, 2022, Jamie Lynn’s lawyer hit back at Britney’s “disappointing” decision to issue a cease-and-desist letter despite her recent “vile statements” on social media about the Sweet Magnolias star. “As an initial matter, in your Letter you state that...
CELEBRITIES・2 DAYS AGO
Insider

Jamie Spears asked the security firm to mirror the singer's iCloud, allowing him to see her phone's content in real-time, according to court filings.
CELEBRITIES・2 DAYS AGO
Newsweek

Britney Spears' war of words with her younger sister, Jamie Lynn Spears, showed no sign of stopping on Wednesday, when she shared a furious Instagram post.
CELEBRITIES・2 DAYS AGO

Jamie Lynn Spears Claims She Took 'No Steps' To Be A Part Of Sister Britney Spears' Conservatorship: 'I've Only Ever Loved And Supported Her'

Jamie Lynn Spears is telling her side of the story. The 30-year-old actress — who is known for being the younger sister of pop star Britney Spears — is speaking up for the first time about her experience being a part of her famous family and their complicated dynamics.
CELEBRITIES・10 DAYS AGO
extratv

Britney Spears’ little sister Jamie Lynn took to Instagram on Friday to “clarify” some things about their feud. Earlier this week, Jamie Lynn spoke about her new book “Things I Should Have Said” and her famous sister in an interview with ABC News for “Good Morning America” and “Nightline.” Britney wasn’t happy about it, and posted on Twitter that Jamie Lynn was trying to “sell a book at my expense.”
CELEBRITIES・8 DAYS AGO
papermag.com

In her first big interview since Britney Spears’ conservatorship was terminated in November, Jamie Lynn Spears is finally addressing her relationship with her sister and her involvement in the conservatorship. In a segment with Good Morning America that aired today, Jamie Lynn maintained that she had nothing to do with Britney’s finances, despite court filings that said otherwise. She also called herself her “sister’s biggest supporter.”
CELEBRITIES・10 DAYS AGO
Vulture

In the recent successful fight to end her conservatorship, Britney Spears was not shy to implicate her family — claiming, among other things, that they didn’t help her get out of the arrangement, that they’ve “lived off” the conservatorship, and that she wanted to sue them. Now, Britney’s younger sister, Jamie Lynn Spears, is sharing her experience with her sister’s conservatorship. Jamie Lynn Spears appeared on Good Morning America to promote her upcoming memoir, Things I Should Have Said, and to answer questions about her sister’s high-profile conservatorship. The former Zoey 101 star said she “was happy” when the conservatorship ended, adding that she “didn’t understand what was happening” when the conservatorship began in 2008, when she was 17. She went on to clarify her involvement with the 13-year arrangement. “There was no, like, me overseeing funds or something like that, and if that was, then it was a misunderstanding,” Spears said. “But either way, I took no steps to be a part of it.” On top of that, she claimed she had previously tried to help Britney get out of the conservatorship. “When she needed help, I set up ways to do so, went out of my way to make sure that she had the contacts she needed to possibly go ahead and end this conservatorship and just end this all for our family,” Spears added. She continued, “I did take the steps to help, but how many times can I take the steps without, you know, she has to walk through the door.” Attorneys for Britney Spears did not immediately respond to a request for comment.
CELEBRITIES・10 DAYS AGO
wxerfm.com

It seems as though Britney Spears and her sister Jamie Lynn may be on the road to making up after getting into a heated online exchange. On Saturday, Britney shared a lengthy Twitter post in which she clarified her feelings about Jamie Lynn, who recently did an interview in which she discussed the singer, their relationship and the past while promoting her upcoming book Things I Should Have Said, out January 18.
CELEBRITIES・5 DAYS AGO
starlocalmedia.com

Britney Spears says she should've 'slapped' her mom and sister

Britney Spears says she should've "slapped" her mother and sister "across [their] f****** faces". The 40-year-old pop star - whose 13-year conservatorship was terminated last year - has taken to Instagram to vent her anger against her mom Lynne Spears and her younger sister Jamie Lynn Spears. Alongside an image...
TV SHOWS・4 DAYS AGO
Newsweek

Britney Spears' lawyer has filed documents in court, which expand on allegations that her father, Jamie Spears, surveilled her without her knowledge.
CELEBRITIES・2 DAYS AGO
OK! Magazine

Jamie Lynn Spears Says She Tried To Help Britney Spears Terminate Her Conservatorship, Maintains She Is As 'Confused As Everyone Else Is' By Their Fractured Relationship

Jamie Lynn Spears is spilling the tea on her sister, Britney Spears', conservatorship. The second part of the 30-year-old's interview on Alex Cooper's "Call Her Daddy" podcast aired as she promotes her memoir, Things I Should Have Said. Jamie Lynn admitted that at first, she didn't know what a conservatorship...
CELEBRITIES・1 DAY AGO