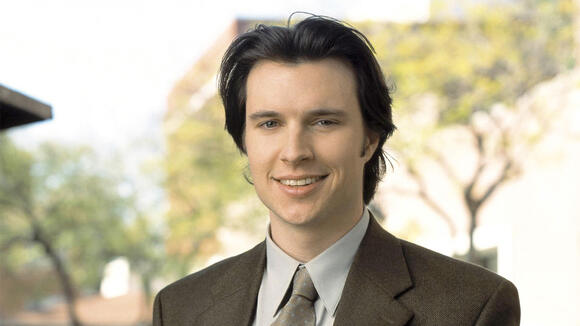 We are truly devastated at the loss of our beloved Heath Freeman. A brilliant human being with an intense and soulful spirit, he leaves us with an indelible imprint in our hearts. His life was filled with deep loyalty, affection, and generosity towards his family and friends, and an extraordinary zest for life.

He was extremely proud of his recent film work and was very excited for the next chapter of his career. His remarkable legacy as a son, brother, uncle, friend, extraordinarily gifted actor and producer, consummate cook, and man with the most infectious and spectacular laugh, will live on forever. May his memory be a blessing to all who knew and loved him.

Freeman had parts on a number of big-name series, going all the way back to an episode of ER in 2001. He also appeared on NCIS , The Closer and Without a Trace , among others.

More recently, he was cast in director Michael Polish’s film Terror on the Prairie , which stars Gina Carano, and Devil’s Fruit , which is in post.

Moakler wrote about Freeman’s passing on Instagram Sunday: “Heartbroken to hear of the loss of my dear friend Heath Freeman, talented actor, director, producer, outstanding chef and a solid friend. You will be so dearly missed and I will cherish every amazing memory we all had…. and we have a lot of great ones!! Godspeed.”

Director Ariel Vromen replied, “So sad,” to her post.

Moakler later wrote in the comments on her Instagram that “he passed in his sleep yesterday in his home in Austin.”

Moakler also posted on Twitter: “Godspeed beautiful friend, I will miss your laugh and cherish our great times… ty for making this life exciting and fun”

Morgan Stevens, who played numerous roles on television before a tragic confrontation with police derailed his career, was discovered dead at age 70 in his home today as part of a police wellness check. No information on the cause of death was released by police. His death was first reported by TMZ. Born October 16, 1951, in Knoxville, Tennessee, Stevens headed to Hollywood soon after graduating college. He appeared as Paul Northridge in one episode of The Waltons and in three reunion movies, including A Wedding on Walton’s Mountain, in which his character married Erin Walton (played by Mary Elizabeth McDonough). His first...
KNOXVILLE, TN・5 HOURS AGO
Deadline

Peter Robbins, who voiced Charlie Brown in the classic 1960s Peanuts cartoons, has died. The former actor died by suicide last week, his family told San Diego’s Fox 5. He was 65. Robbins (real name Louis G. Nanasi) was born in 1956 in Los Angeles. He began acting in 1963 and was the first to play the Charles M. Schulz-created character of Charlie Brown, including in such perennial holiday animated classics as A Charlie Brown Christmas (1965) and It’s the Great Pumpkin, Charlie Brown (1966). In addition to voicing Charlie Brown for four years, Robbins recurred on the 1968 comedy Blondie and guest starred  on such TV series as Rawhide, The Munsters, The Donna Reed Show, F Troop, Get Smart and My Three Sons. Robbins quit acting in 1972. For awhile, he worked as a DJ in Palm Springs. Robbins, who suffered from bipolar disorder, made headlines in 2015 when he was sentenced to five years for making threats to several people, including public figures. He was released in 2019.
CELEBRITIES・1 DAY AGO
Deadline

Kathryn Kates, a veteran character actress who appeared in such TV series as Orange Is the New Black, Seinfeld and Law & Order: SVU and The Sopranos prequel movie The Many Saints of Newark, has died. She was 73. Her reps at Headline Talent Agency said Kates died Saturday of cancer in Florida. “Kathryn has been our client for many years, and we have grown much closer to her in this last year since she knew of her cancer returning,” Headline Talent said in a statement. “She was always incredibly brave and wise and approached every role with the greatest of passion. She will be greatly...
NEWARK, NJ・1 DAY AGO
TVOvermind

Although we all know that death is an inevitable part of life, the last few years seem to have been filled with an exceptional amount of loss. Still, that didn’t make news of actor Dwayne Hickman’s death any easier for his fans and loved ones to digest. Dwayne, who has worked in the entertainment industry for more than 60 years, passed away on January 9, 2020. He was 87 years old at the time. While it’s true that loss is never an easy thing to deal with, Dwayne’s memory will continue to live on through all of the things he contributed to the world, both personally and professionally. Keep reading to learn more about the life and legacy of Dwayne Hickman.
CELEBRITIES・14 DAYS AGO

Vachik Mangassarian, known for his roles in NCIS, Curb Your Enthusiasm, and Agents of S.H.I.E.L.D., has died at the age of 78. IN MEMORIUM: Remembering famous faces we lost in 2022. The TV star’s representatives confirmed to Deadline that he passed away from COVID-19 complications at his home in Burbank,...
PUBLIC HEALTH・21 HOURS AGO
ComicBook

Popcorn Deelites, the horse who depicted legendary race horse Seabiscuit in the film of the same name, has died. He was 24. The horse reportedly died as a result of complications from colic. His passing was announced by Old Friends Farm via their social media accounts. The 24-year-old gelding, who had a moderate racing career aside from his Hollywood success, had been retired at Old Friends, a thoroughbred retirement farm in Georgetown, KY., since 2005. According to a statement from the farm, he had been pensioned there alongside his sire, Afternoon Deelites.
GEORGETOWN, KY・2 DAYS AGO
ClickOnDetroit.com

Singer and actor Meat Loaf has died, according to his family. The star was 74 years old. No cause of death was released. The musician died Thursday with his wife, daughters and close friends by his side. His family released a statement following his death:. Meat Loaf’s 1977 debut album...
CELEBRITIES・5 DAYS AGO
WFTV Channel 9 Orlando

French actor Gaspard Ulliel, who appears in Marvel’s upcoming “Moon Knight” series, died Wednesday following a skiing accident in the Alps, according to his agent’s office. He was 37. Ulliel appears as antagonist Anton Mogart, also known as Midnight Man, opposite Oscar Isaac and Ethan Hawke...
CELEBRITIES・7 DAYS AGO

YOUTUBE star Melanie Ham 36, "fought like a warrior queen" all the way to the end, according to her husband. The youtube star tragically died this week after a battle with a rare form of cancer - just days before her sixteenth wedding anniversary. Her husband shared a heartbreaking final...
CELEBRITIES・10 HOURS AGO
Radar Online.com

Bob Saget’s suspected cause of death has been revealed and cops believe the late comedian “suffered a heart attack or a stroke” due to the circumstances in which they found his body. Article continues below advertisement. According to Daily Mail, authorities that arrived at Saget’s Ritz-Carlton hotel...
CELEBRITIES・15 DAYS AGO
USA TODAY

'Jeopardy!': Amy Schneider defeated after 40 games. The moment she knew 'I was in trouble'

Vachik Mangassarian, a veteran character actor known for his roles on NCIS, Curb Your Enthusiasm, and Agents of S.H.I.E.L.D., has died at the age of 78 from COVID-19 complications. Representatives for Mangassarian confirmed to The Hollywood Reporter that he passed away in Burbank, California. The Iran-born Armenian star moved to...
BURBANK, CA・1 DAY AGO
Newsweek

‘Jeopardy!’: Did Ken Jennings Accidentally Give a Hint During Final Jeopardy?

Some “Jeopardy!” fans are wondering if current host Ken Jennings accidentally slipped up and gave a hint away during Final Jeopardy. The category for the Final Jeopardy question was “sea life.” The clue itself stated, “In 2018 National Geographic reported that half of this was dead, “akin to a forest fire after a devastating fire.”
TV & VIDEOS・18 HOURS AGO
Outsider.com

Leroy Jethro Gibbs may still be in Alaska for all NCIS fans know. No one has seen Mark Harmon on the CBS procedural since October. But Harmon’s Gibbs was mentioned Jan. 3 (happy face). In fact, NCIS writers devoted a nice chunk of dialogue to Gibbs, the now-former special agent in charge of the NCIS office in D.C. It seems that Gibbs gifts the children of agents with funds for college. McGee and Jimmy were on the receiving ends of such gifts in the episode called Pledge of Allegiance. Gibbs did something similar for Vance years before. So Gibbs lived on, even it was dialogue only.
CELEBRITIES・13 DAYS AGO
The US Sun

ACTOR Morgan Stevens was found dead in his home after police were called to conduct a wellness check. He was best known for appearing on Melrose Place, Fame and A Year in the Life. According to TMZ, sources close to the actor said authorities were contacted after neighbors noted they...
CELEBRITIES・8 HOURS AGO
Popculture

Beloved comedian Louie Anderson died on Friday at the age of 68 after he was hospitalized in Las Vegas last week. His publicist Glenn Schwartz confirmed to The Washington Post that the Emmy-winner's cause of death was complications with his non-Hodgkin's lymphoma. He had been privately battling cancer for a decade.
CELEBRITIES・3 DAYS AGO
The Independent

Alicia Witt speaks after parents found dead in dilapidated home: ‘They weren’t penniless, they were stubborn’

Walking Dead actress Alicia Witt has opened up about the mysterious death of her parents, more than one month after they were found dead inside their dilapidated home with no heat in Massachusetts.The actor and singer revealed that her parents, Robert and Diane Witt, refused her help and she was not allowed inside her their home “for well over a decade”.“My parents were not penniless. They were fiercely stubborn, beautifully original souls, and with that, they made choices - choices that I couldn’t talk them out of. I did help them, in all the ways I could - in all...
CELEBRITIES・1 DAY AGO
The US Sun

BRAD Pitt is dating singer Lykke Li, who lives just minutes away from his gated home in LA, The Sun can exclusively report. The actor - who is still in the middle of a messy divorce from ex Angelina Jolie - has been hanging out with the Swedish pop star since the middle of last year, a source claimed.
CELEBRITIES・13 HOURS AGO