Never take a day for granted !

Trae Young, on teams guarding him lately with players who are essentially power forwards (Gordon in DEN, Wagner tonight). 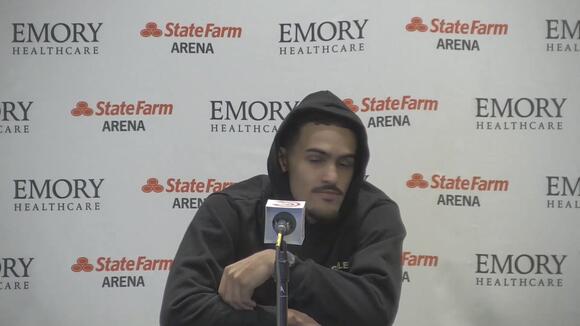 Back to Back!! Great Team Win🔥

Kind of a bloodbath tonight. Injuries from the game action this evening so far:

Trae Young on bigger players, like Franz Wagner tonight, guarding him in games: “Coaches like to put bigger guys on me to be more physical. If that’s what they think can work, I obviously encourage them to keep doing it.” – 10:24 PM

That stretch from Gallo to end the first quarter and Lou to bridge the final quarters was huge tonight – 10:12 PM

The Hawks had a season-high 32 assists tonight.

Nate McMillan said Kevin Huerter felt like “something was about to pull” in his hamstring. He didn’t feel right after getting treatment. – 10:08 PM

Kevin Huerter felt like “something was about to pull,” regarding his hamstring, per Nate McMillan.

Cam Reddish hurt his left hand late in the fourth quarter. He was shaking it and looking at it at the end of the game – 9:58 PM

Hawks top the Magic tonight in every major statistical category. 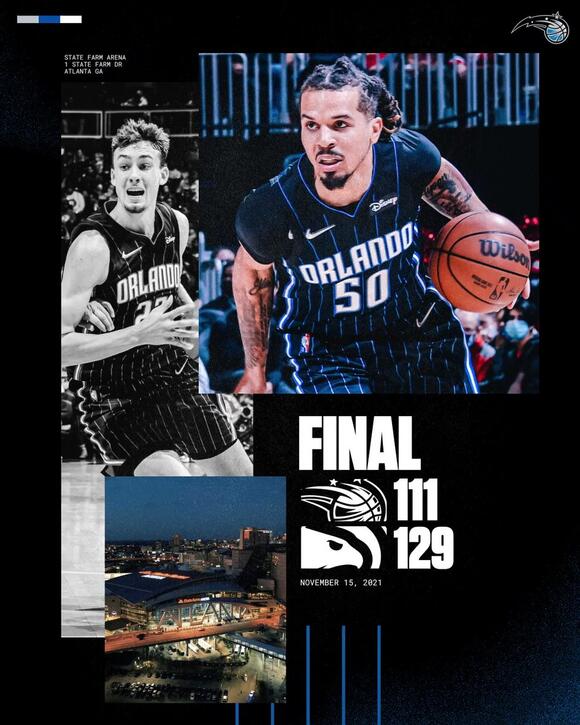 Cole Anthony finishes with 29 points and a career-high 11 assists in the Magic’s loss to the Hawks. – 9:52 PM

His nine-game 20+ scoring streak is tied for the third-longest such streak of his career, per @EliasSports. – 9:50 PM

Career-highs for John Collins in free throws made and attempted (11-14), per @Atlanta Hawks PR.

Knicks improve to 8-6 on the season. Next up: the Magic on Wednesday.

Mo Bamba is the only player allowed to get called for fouls on Collins 🤣🤣 crazy – 9:46 PM

Mo Bamba is being held back out of something by Cole Anthony. – 9:34 PM

DeMar talks about how close he was to being a Laker, and Caruso tells you what you can do with your “Orlando Bubble” criticisms. 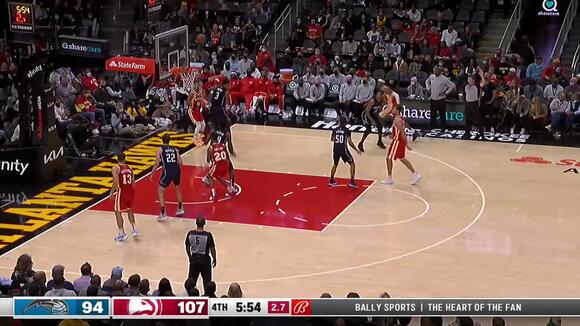 Bogdan Bogdanovic has a season-high 19 points tonight (4-8 from 3).

Bogi and Clint Capela (17 pts), two guys getting back in the swing of things after injury, both with season-highs in scoring for the Hawks tonight. – 9:33 PM

Wagner already gets calls that John Collins can only read about – 9:33 PM

Franz Wagner has a Sabonis like quality running the break and delivering that bounce pass #MagicHawks – 9:32 PM

Clint Capela has scored a season-high 17 points (8-9 FG) tonight, with seven minutes still to play in the fourth quarter – 9:26 PM

Clint Capela has looked like last season’s version of himself for the second straight game. Encouraging for the Hawks. – 9:23 PM

Cole Anthony violated the sacred fake DHO rule: Only once per game.

Cole Anthony has registered a career-high 10 assists vs. Atlanta. He also has 25 points for his third double-double of the season. Magic trail by 9 entering the 4th quarter. – 9:15 PM

Cole Anthony is really lucky he didn’t get tossed about a minute ago… He’s already got one tech, and was giving the ref hell after a loose ball that he appeared to knock out of bounds. He’s got 25 points, 10 assists and the Magic need him to go wild in the 4th. – 9:14 PM

.@Cole Anthony scored 11 PTS in the third quarter and is now up to 25 PTS for the game 🔥 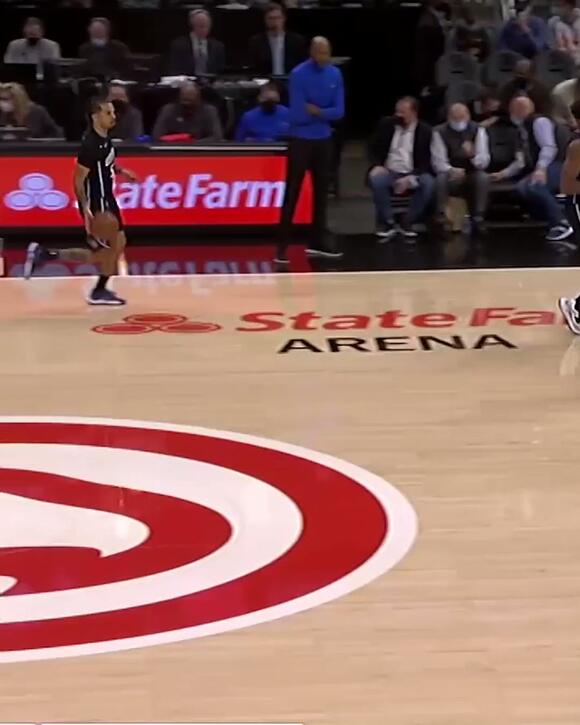 Differences btw #MagicHawks on display last 5 min. ATL will play thru post, make you collapse, dig and help. Sometimes score. Clean 3p looks come off a kickout. ORL just comes down, ball doesn’t touch paint, launch contested 3s. Its how they get the shots that make the difference – 9:09 PM

Kevin Huerter is out for the remainder of the game. – 8:58 PM

Hawks go on a 12-3 run to create separation from the Magic early in the third quarter. Four different Atlanta players score during that stretch. – 8:57 PM

Hawks outscoring the Magic 14-6 to start the third quarter and take a 74-62 lead.

Definitely settling into a rhythm, it seems. – 8:54 PM

Atlanta heating up. 11-4 run to start the third as Trae Young buries a 3 in the face of Gary Harris. Cole Anthony just got teed up and Magic are unraveling a bit. – 8:53 PM

With his ninth point tonight, Trae Young hit 5,290 for his career, and surpassed Walt Bellamy to move into 25th place in franchise history in scoring. – 8:50 PM

Solomon Hill is starting in place of Kevin Huerter to start the second half, as Huerter is questionable to return with hamstring tightness. – 8:46 PM

Kevin Huerter (left hamstring tightness) is questionable to return to the game. – 8:43 PM

have a half, @Cole Anthony: 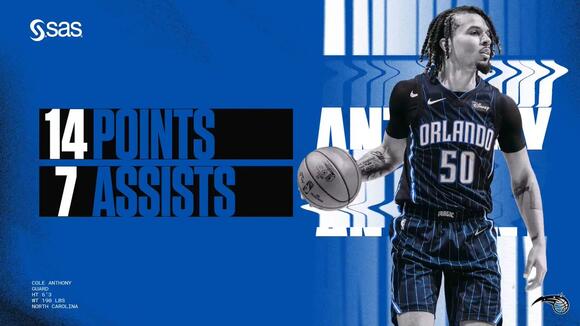 Wendell Carter Jr. at the half:

Ended the first half on a 6-0 run. Big smile from Bogi after hitting a corner 3 to put the Hawks up 59-56 in the final minute.

That was Gallinari’s best half of the season, coming off probably his best full game.

Magic trail the Hawks by 4 at halftime at Atlanta.

Young and Bogdanovic both have 12 points 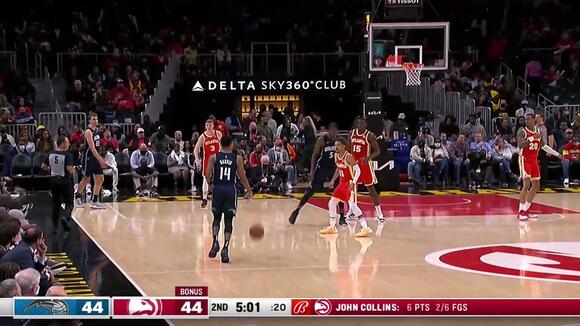 Good challenge by McMillan. It’s less than ideal that John Collins can’t get an obvious foul call against a rookie. – 8:26 PM 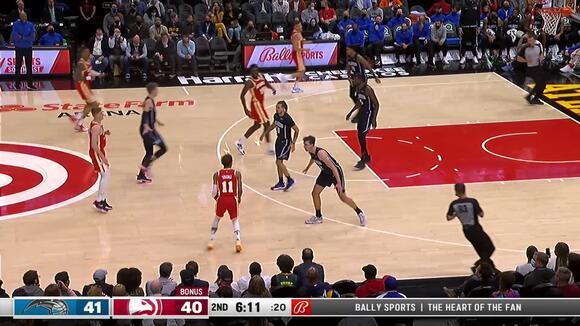 Danilo Gallinari has already tied his season high with 4 made field goals (yes, it’s been that rough for him) – 8:08 PM

Danilo Gallinari leads the Hawks with six points, coming off the bench to go 2-for-2 from 3-point range. – 8:04 PM 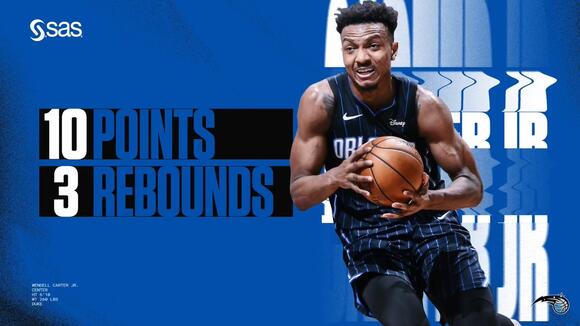 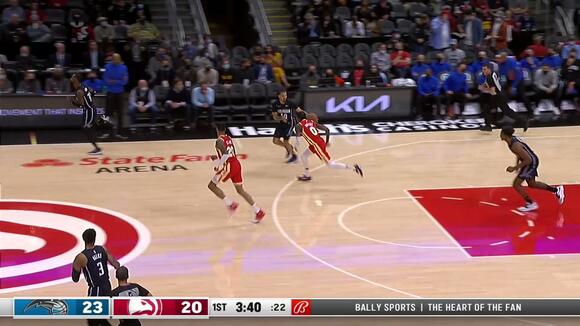 That was a heck of closeout by Danilo Gallinari on Cole Anthony’s stepback. – 7:52 PM

Defense optional for both the Hawks and Magic tonight – 7:48 PM 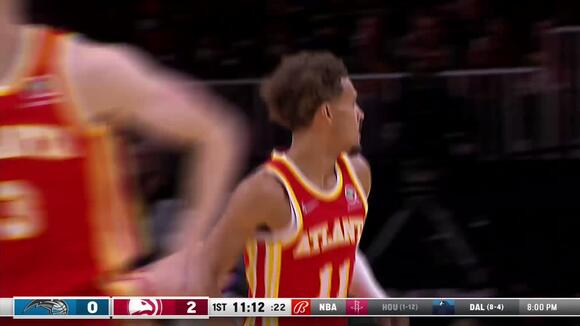 The @Orlando Magic have now made at least one three-point field goal in 1,143 consecutive games, dating all the way back to March 17, 2007.

Franz Wagner gets the first shot at guarding Trae. – 7:41 PM

No idea what Richardson said, but that was a quick T. Had to have said a couple of magic words there. – 7:29 PM

Bogdan Bogdanovic is good to go for tonight’s game – 6:32 PM

Nate McMillan said he spoke with De’Andre Hunter (who will miss about 8 weeks after wrist surgery) yesterday.

“That’s a tough blow, so he was down about that, but the good thing is it’s early, he’ll have time to recover and get back to playing ball.” pic.twitter.com/aah8rQFTZ8 – 6:17 PM 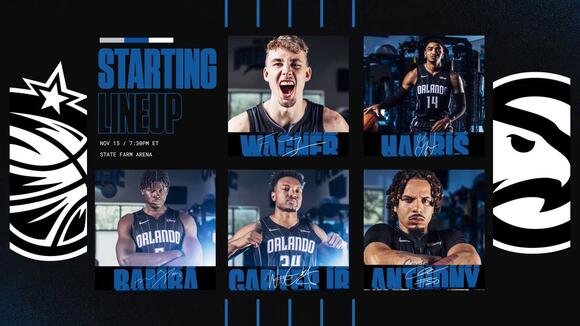 It is good that Trae Young is ranked 2nd in the NBA in assists, but not as good that the Hawks next-ranked player – with 2.2 assists per game – is at 106th. pic.twitter.com/YyvKnfBWxA – 6:06 PM

Jalen Suggs will not play tonight vs. the Hawks due to a sprained right ankle. Gary Harris will start in place of Suggs, Jamahl Mosley said. – 6:02 PM

Jalen Suggs (ankle) will not play tonight in the @Orlando Magic‘s road game against the Atlanta Hawks. Gary Harris will start in his place. – 6:01 PM

@Orlando Magic guard Jalen Suggs will not play tonight at Atlanta due to a sprained right ankle.

Kevin Huerter will start tonight, with De’Andre Hunter out, per Nate McMillan. – 5:49 PM

Kevin Huerter will once again be in the starting lineup tonight – 5:49 PM

Kyle Kuzma recorded a 25.3 usage rate against the Magic on Saturday, tied for his highest of the season.

In the spirit of the wonderful Orlando Magic video @bykevinclark posted the other day, I went digging to find the amazing old school intro for the Thunder from 2009-10 (I think) when a select few games aired on KSBI. Behold: pic.twitter.com/xwjfoJANiC – 2:45 PM 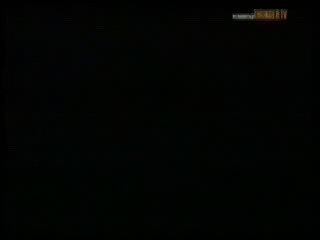 NBA veteran Chandler Parsons has announced his retirement from the NBA in an Instagram post on Tuesday. Parsons has played for the Houston Rockets, Dallas Mavericks, Memphis Grizzlies and Atlanta Hawks.
NBA・2 DAYS AGO
Sportsnaut

NBA power rankings: Now that the NBA season is in full swing, it’s time to rank all 30 teams. With
NBA・1 DAY AGO
All Hawks

The Atlanta Hawks have their center of the future.
NBA・19 HOURS AGO

Trae Young scored 30 points for the struggling Atlanta Hawks, who trailed for much of the game before rallying for a 121-114 victory over the Milwaukee Bucks on Monday night to snap a 10-game home losing streak. Winning at State Farm Arena for the first time since Nov. 22, the Hawks avoided their longest stretch […] The post Hawks rally to beat Bucks 121-114, snap 10-game home skid appeared first on The Atlanta Voice.
NBA・2 DAYS AGO

Down ten at the end of last quarter, the Philadelphia 76ers have now snagged the lead. Three quarters in and their offense has really been able to impose its will, dominating the Orlando Magic 94-80 three quarters in. Center Joel Embiid has taken over for Philadelphia, currently boasting 47 points...
NBA・1 DAY AGO
FanSided

The Atlanta Hawks took a major step in the right direction if they are going to turn this season around after a dreadful 17-25 start. Their 121-114 win over the Milwaukee Bucks snaps a five-game losing streak, a 10-game skid at State Farm Arena, and makes the Hawks 2-0 over the defending champs this season.
NBA・2 DAYS AGO
USA TODAY Sports Media Group

With just three weeks remaining until the 2021-22 NBA trade deadline, the scuttle league-wide about potential player movement is starting to hit a fever pitch. As such, for the first time this season, we are ranking the 10 players who have appeared most often on our Trade Rumors Page over the past week, as opposed to the Top 5.
NBA・13 HOURS AGO

While the Boston Celtics have been on somewhat of a hot streak through the first half of January, winning six of their10 games played thus far into 2022, for the most part, it has appeared as though with every positive step forward this team takes they end up following it up by then taking two steps back and now, as a result of Wednesday’s underwhelming loss to the Charlotte Hornets, they find themselves back to boasting just a measly .500 record of 23-23.
NBA・18 HOURS AGO
Sportsnaut

Bookmark. Save. Do your thing. We will be providing constant updates on this page as it relates to the biggest
NBA・2 DAYS AGO
HipHopWired

This week, King James made history by becoming the first player to reach the milestones of 30,000 points scored, 10,000 rebounds hauled in, and 9,000 assists doled out.
NBA・20 HOURS AGO
Lakers Nation

A potentially major development occurred in the Los Angeles Lakers’ 111-104 loss to the Indiana Pacers on Wednesday. With 3:52 left in the fourth quarter, head coach Frank Vogel deployed Malik Monk onto the court, taking Russell Westbrook out of the game in crunch time — an adjustment rarely seen in the first half of the 2021-22 season. About four minutes earlier, L.A. had lost its lead that they held onto for the majority of the game.
NBA・12 HOURS AGO
USA TODAY

As good as Grant has been for Detroit since signing a three-year, $60 million contract, he might not fit the timeline of the team’s rebuild.
NBA・2 DAYS AGO
Sportsnaut