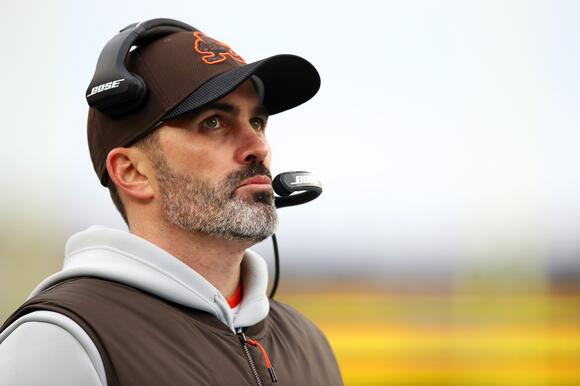 Following the game Garrett lamented the lack of adjustments made by defensive coordinator Joe Woods but did not name Woods specifically.

“Any time you have a game like that, there is a lot of frustration,” Stefanski said Monday afternoon. “I have spoken to Myles about that, and I will keep that conversation between Myles and myself.”

The Browns gave up three touchdown drives of over 90 yards to the Patriots in the 38-point loss, the worst under Stefanski and fourth worst since the franchise returned in 1999.

“Win, lose or draw, you always want to properly react,” Stefanski said. “You want to make sure anything that came up short, you want to own it and understand why. As we all know, sometimes you win those games and there is something you did not do so well, and you can’t let that slide.

“Even after a win, you have to make corrections. That is what today is about. That is what Mondays are always about: owning it, learning from it and then we have to move on.”

Linebacker Anthony Walker didn’t feel Garrett was taking a shot at anyone specifically.

“I think Myles is more so speaking as the whole team, we did not play well,” Walker said Monday. “I think that was his main thing. We did not play well enough as players. Obviously, coaches are going to say they could have done some things differently. At the end of the day, we lost the game. We have to flush it and move on.

“Myles at the end of the day is a leader. He probably would be a captain if we had captains. Everybody looks up to him. He understands that. He owned it himself. We all own it. We all played a part in this loss, and we have to fix it.”

“Again, you give up 45 and you score seven, we just did not have a good enough plan, we did not make enough adjustments and we did not play well enough,” Stefanski said. “It is all the above when you get beat.”

Safety John Johnson III said the Patriots did their homework and beat them with plays they failed to defend well earlier this season.

“I do not know specifically what John is referring to,” Stefanski said. “I think it is true in football when it comes to defense and when you struggle with a particular play, it keeps showing up until you stop it. That is the copycat part of this league. There are things that we have to identify and fix for sure. To specifics, I do not know exactly what John is talking about.”

Playoffs underway – At 5-5, the Browns are in danger of missing the playoffs. They are the No. 11 team in the conference and the only contender they own a tiebreaker over is Denver. That’s it.

“We can’t ride the wave of emotion,” Walker said. “We have to stay locked in on the process. Everything is still out in front of us – our division, the playoffs and everything like that – but we can’t focus on that right now. We have to focus on getting better, fundamentals, details, getting to the practice field on Wednesday and cleaning it up and then going 1-0 this week against the Detroit Lions.”

The 0-8-1 Lions are the only sub-.500 and non-playoff contender remaining on the schedule and time is running out to turn the season around after losing four of the last six games.

“There’s a lot of talking that we can do, but at the end of the day, you have to do it,” Walker said.

Back-to-back games against the 6-3 Ravens followed by the 5-4 Raiders at home, a trip on Christmas to Green Bay where the Packers are 8-2 then to Pittsburgh for the 5-3-1 Steelers before the finale at home against the 5-4 Bengals await.

“We’re in the playoffs now,” Walker said. “If you want to be a playoff team, your playoffs just started earlier. We start it now. So, we’re a playoff team right now and we’ve got to play every game like it’s a playoff game.”

Consistently inconsistent – the Browns are the ultimate Jekyll and Hyde team. One week they’re hot, the next ice cold. Just took to the last two games as all the evidence you need.

Stefanski sees it himself yet doesn’t have an answer as to why.

“That is a very good question,” Stefanski said. “That is the frustrating part because we are way, way too inconsistent as a team right now. I have seen it. I have seen some good moments from our offense, from our defense and from special teams.

“I do not think there is any magic wand when it comes to that. I think we just have to identify and then work at it so that we can play to our full potential.”

Hunt TBD – Stefanski isn’t sure if running back Kareem Hunt would return to practice this week. He’s missed four games on injured reserve due to a calf injury.

“We’ll see over the next couple days as we go,” Stefanski said. “He’s progressing, he’s working through this rehab, so we’ll see.”

COVID update – Stefanski also did not have an update on the five players that were placed on the reserve/COVID-19 list last week, including running back Nick Chubb.

“As you can imagine, we’re hopeful but we’ve got to let the process play out,” Stefanski said.

Injury report – Cornerback Troy Hill was released from the hospital Sunday night and is traveling back to Cleveland Monday. He was diagnosed with a neck sprain. Receiver Anthony Schwartz and cornerback A.J. Green are in the concussion protocol.

Up next – Players off Tuesday, practice Wednesday.

The Cleveland Browns’ season didn’t end the way they wanted it to, as the franchise took a step backward from their 11-5 campaign last year to fall to 8-9. One of the big reasons for the Browns’ step back was the performance of quarterback Baker Mayfield, who noticeably struggled as he attempted to play through a nagging shoulder injury. Mayfield’s struggles opened up the rumor mill to a possible Browns trade, to which an anonymous NFL executive responded to with a stern warning to Cleveland, via Jeremy Fowler of ESPN (h/t Browns Wire):
NFL・2 DAYS AGO
San Diego Union-Tribune

Baker Mayfield played with a completely torn labrum in his left, non-throwing shoulder for virtually the entire 2021 season. A fracture occurred, too.
NFL・2 DAYS AGO
Audacy

Chris Godwin will be among a robust group of wide receiver free agents this offseason and ought to have plenty of suitors despite his season-ending ACL injury.
NFL・2 DAYS AGO

Daryl Ruiter: Baker Mayfield deserves credit for taking the Browns to the playoffs in 2020, but he didn't meet expectations in 2021

Where is the bar for Baker Mayfield? Daryl Ruiter says he raised the bar for himself in 2020. Hear the full conversation with Baskin and Phelps!
NFL・1 DAY AGO
92.3 The Fan

Doug Lesmerises: Baker Mayfield is right in the middle, and the middle is complicated for the Browns

Doug Lesmerises talks about the Browns’ situation with Baker Mayfield, the potential options on the table for the organization this offseason, Malik McDowell’s situation following his recent arrest and this team’s biggest need at the WR position.
NFL・2 DAYS AGO
brownsnation.com

Should Kevin Stefanski Be On The Hot Seat In 2022?

It is the offseason for the Cleveland Browns. That is the time to evaluate and reevaluate every player and coach to make sure the person is still a good fit for the 2022 Browns. No one is excluded from the exercise including Coach Kevin Stefanski. Should Coach Stefanski be on...
NFL・1 DAY AGO
92.3 The Fan

Chris Rose: Kevin Stefanski needs to seriously evaluate his offense in the off-season

What is the most important thing for the Browns in the off-season? Chris Rose says they need to evaluate their offense. Hear why with Baskin and Phelps!
NFL・2 DAYS AGO

Daryl Ruiter on Stefanski: How can I help my playmakers eat in the pass game

Daryl Ruiter with the very latest on the Browns. Thoughts on Baker Mayfield’s post-surgery speech. Was there some coded message? Why Kevin Stefanski should focus on getting his playmakers the ball for the 2022 season?
NFL・15 HOURS AGO
92.3 The Fan

Sal Capaccio: Bills' season based on Divisional round rematch with Chiefs; recaps '90 playoff thriller vs Browns

John Clayton: Baker Mayfield will be back with Browns, won't be surprised if another QB added to mix

John Clayton talks about quarterbacks that could be traded this offseason, why he believes Baker Mayfield will definitely be back with this team next season, whether Jim Harbaugh could take the Raiders job and more.
NFL・1 DAY AGO
92.3 The Fan

Jeff Schudel: I don't think Baker Mayfield and the Browns are on the same page

Is Baker Mayfield on the same page as the Browns? Jeff Schudel doesn’t think he is. Hear why when he joined Baskin and Phelps!
NFL・11 HOURS AGO

A number of QB’s are expected to come off the board in the back half of the first round, most of whom the Lions will have coached at the Senior Bowl.
NFL・2 DAYS AGO
The Spun

The 2021 NFL regular season is over and playoffs are in full swing, which brings us to one of our
NFL・2 DAYS AGO

ESPN’s Mel Kiper Jr. released his first mock draft on Wednesday and he has the New England Patriots selecting a big-name wide receiver at No. 21 overall.
NFL・2 DAYS AGO
Sportsnaut

Michigan Wolverines head coach Jim Harbaugh could be headed back to the NFL. Despite criss-crossing the country in a full-court
NFL・2 DAYS AGO
The Spun

Just a few days ago, Dallas Cowboys quarterback Dak Prescott made headlines with a controversial comment he made about the officials from Sunday’s game. Following the 23-17 loss to the San Francisco 49ers, Cowboys fans threw objects onto the field, expressing their anger with the officiating crew. After learning fans threw objects at the officials, Dak responded, “Credit to them.”
NFL・1 DAY AGO
CBS Philly

Jalen Hurts Expected To Be Philadelphia Eagles’ Starting QB In 2022: ‘He Knows He’s Our Quarterback’

PHILADELPHIA (CBS) — Jalen Hurts has shown the Eagles enough to come back as their starter in 2022, at least that is what general manager Howie Roseman and head coach Nick Sirianni said Wednesday. Time will tell if Hurts comes back as the team’s clear-cut No. 1 QB, or if Roseman brings in another quarterback to compete with the third-year signal-caller or even acquires an established star, but as it stands three days after the Birds’ season ended in Tampa, the 23-year-old is in the team’s plans for 2022. “Jalen knows where he stands with us,” Sirianni said. “He knows he’s our...
NFL・2 DAYS AGO