Chiefs: Patrick Mahomes reveals what his Whataburger order is 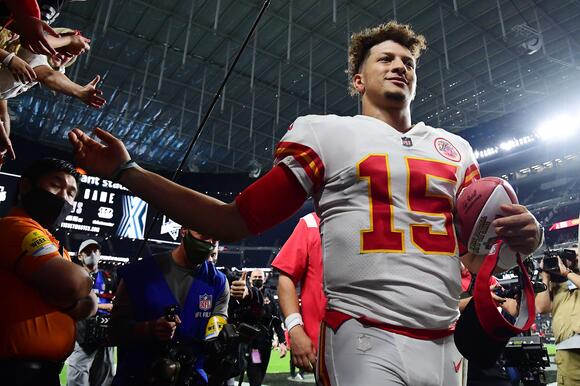 It's a big week in Kansas City. Yes, the Chiefs have won three straight games, are back atop the AFC West, and look like they may have figured their early season struggles out just in time for another playoff run -- but that's not what's important today. Today, there's only one important piece of news worth talking about: the city's first Whataburger has opened . The line to get in may wrap around the block two or three or six times, but whatever: the city's first Whataburger has opened. It's music to Patrick Mahomes' ears, who joined 610's The Drive to discuss -- among other, less important football-related topics -- the big occasion.

"Oh I'm excited, for sure," he said. "I've definitely had this date marked down on my calendar. I already saw the line was pretty crazy, so I might have to wait a couple of days before I go there. But I'm definitely going to try and get a burger, some fries, and that ketchup for sure."

And just because we knew you were curious, he did give an impressively-detailed look into what his go-to order is.

"So it kind of depends, there's several different things I get," he added. "I've had a lot in my life. So obviously I get the #1 with cheese, ketchup, and pickles only with a large fry and a large coke. But they also have this thing on Texas Toast - a barbecue chicken strip sandwich, which I like a lot. And then Britney always makes us get the honey butter chicken biscuits in the morning."

You can listen to Mahomes' entire interview in the player below:

The opening script is established days before kickoff, and among several concepts that comprise the final potion, one key is to keep it fresh. So when you see Chiefs coach Andy Reid clenching that laminated play sheet in his hand — with everything from first-down calls to short yardage, red zone and third-down options — know that the words he’s reading are different than a month or even a week earlier.
NFL・2 DAYS AGO
Sportsnaut

Super Bowl 2022: The Tampa Bay Buccaneers are the reigning NFL champions, but who'll make the playoffs — and lift the Lombardi Trophy at the end of this season?
NFL・2 HOURS AGO
Fox News

An NFL fan who was at the Kansas City Chiefs and Denver Broncos game on Saturday was heard shouting anti-gay slurs at Patrick Mahomes’ brother Jackson. Jackson Mahomes, along with Patrick’s fiancée, Brittany Matthews, is a regular attendee at Chiefs. He’s skyrocketed to fame on TikTok doing his own interpretations of the viral trends on the app.
NFL・2 DAYS AGO
Sportsnaut

The Dallas Cowboys lost to the San Francisco 49ers in the dumbest way possible Sunday afternoon. The Cowboys were on a late drive in an attempt to steal a last-second win in the Wild Card round, made a terrible play-call, then had an official cost them precious time as they tried to stop the clock. It was freaking wild.
NFL・5 HOURS AGO
ESPN

KANSAS CITY, Mo. -- The Kansas City Chiefs will be without running back Clyde Edwards-Helaire in Sunday night's wild-card-round playoff game at home against the Pittsburgh Steelers. Edwards-Helaire, the Chiefs' second-leading rusher this season with 517 yards, will miss his third straight game because of a shoulder injury. Edwards-Helaire practiced...
NFL・2 DAYS AGO
bardown.com

Ah Jeez, the Dallas Cowboys did it again. The Cowboys potent offence mixed in with a vastly improved defence had lots of fans primed and ready to make a run in the 2022 postseason. While they are certainly a flawed team, their raw talent is up there with the best of them.
NFL・5 HOURS AGO
Los Angeles Times

Josh Allen passed for five touchdowns as the Buffalo Bills rolled past the New England Patriots 47-17 in a wild-card playoff game Saturday night.
NFL・1 DAY AGO

A number of NFL futures bets can be placed throughout the 2021 NFL season, but Super Bowl odds are where
NFL・15 HOURS AGO
NBC Sports

Most Cowboys fans were likely feeling the same way watching Sunday's NFC Wild Card Game against the 49ers. One Cowboys fan at AT&T Stadium went viral for her priceless reaction to Dallas' struggles against San Francisco. As the internet does so well, the priceless moment spread quickly and it appeared...
NFL・6 HOURS AGO
Sports Illustrated

Discover player props odds, plays, and insights for Ben Roethlisberger in his NFL Playoffs contest with the Pittsburgh Steelers against the Kansas City Chiefs.
NFL・2 DAYS AGO
Sports Illustrated

Discover player props odds, plays, and insights for Tyreek Hill in his NFL Playoffs contest with the Kansas City Chiefs against the Pittsburgh Steelers.
NFL・1 DAY AGO
Sports Illustrated

The breakdown of Friday’s 2021 All-Pro votes give a significant hint at which quarterback could take home MVP honors.
NFL・2 DAYS AGO
610 Sports Radio

For the first time since 2017, the Kansas City Chiefs won’t have a player named to the AP All-Pro team.
NFL・2 DAYS AGO
610 Sports Radio

Matt Nagy shares the moment he knew Patrick Mahomes 'had it'

Patrick Mahomes may not have been the starting quarterback in Kansas City during Matt Nagy’s tenure as the Chiefs’ offensive coordinator, but that doesn’t mean he didn’t see something special in the rookie quarterback.
NFL・2 DAYS AGO
The Spun

The Dallas Cowboys and the San Francisco 49ers are about to kick off in their Wild Card game on Sunday afternoon. Typically, a Cowboys vs. 49ers NFC playoff game would be televised on FOX, with Joe Buck and Troy Aikman on the call. Instead, today’s Dallas vs. San Francisco game...
NFL・9 HOURS AGO
FanSided

Dallas Cowboys fans angry losing to the 49ers reacted in the worst possible way: By throwing trash at refs and their own players. Sports fans are passionate. It’s a critical part of what makes sports so special. Unfortunately, passion doesn’t always express itself in the most civilized ways. As...
NFL・4 HOURS AGO
Sports Illustrated

Discover player props odds, plays, and insights for Clyde Edwards-Helaire in his NFL Playoffs contest with the Kansas City Chiefs against the Pittsburgh Steelers.
NFL・11 HOURS AGO
The Spun

Mike McCarthy Reveals Why He Had Dak Prescott Run The Ball

The Dallas Cowboys fell to the San Francisco 49ers, 23-17, in the Wild Card round of the NFC playoffs on Sunday night. Dallas is one-and-done in the playoffs, losing a heartbreaker to San Francisco at home on Sunday. The game came down to one final play. Dak Prescott rushed the...
NFL・4 HOURS AGO