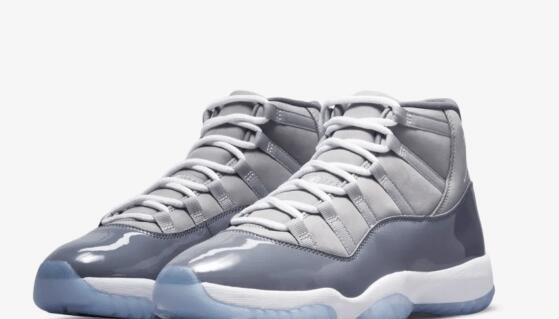 M ourning a planned L on the SNKRS app is one thing, but a surprise release is an entirely different feeling.

Well, that’s what happened this morning when Jordan Brand shock dropped the Air Jordan 11 Cool Grey. Sneaker Twitter was pretty excited as this marks the third time consumers have had a chance to cop them– with the first being in 2001 and then again in 2010.

Not only is Cool Grey one of the favorite colorways draped on any given Jordan silhouette, but His Airness also did some damage while rocking them.

“What’s cooler than cool? Cool Grey, of course. Taking inspiration from the OG that MJ wore en route to his fourth championship ring, the Air Jordan 11 “Cool Grey” is back for its heralded 20th anniversary,” reads the SNKRS site. “This classic colorway, worn by MJ during his return to the league, features premium patent and nubuck leathers, full-length Nike Air cushioning, and an icy outsole.”

The coveted grey kicks were already on the minds of sneakerheads because hours earlier, official images were released, announcing that they’d be this year’s Jordan 11 release around the holidays. So while many were aware of the forthcoming drop on December 11, they had no clue they’d have to drop $225 on the SNKRS app quite this soon. However, with a quick scroll through Twitter, it seems like Jordan Brand may have been in the holiday spirit and produced a lot of pairs due to the immense amount of “GOT ‘EM” messages tweeted.

Check out how Twitter is reacting to the shock drop below:

After the initial launch of the ‘Have A Nike Day’ collection, Nike will release more models and color variations. Once again, we have the Air Force 1 that will debut this Spring. Going over this Nike Air Force 1 Low, it features White leather across the base while...
AEROSPACE & DEFENSE・11 DAYS AGO
sneakernews.com

Currently, it’s uncertain whether or not Travis Scott will be involved in the Nike Air Trainer 1‘s 35th anniversary celebration, but what’s been established is that the artist helped excite countless newcomers for the model’s milestone. In addition to original colorways, the 1987 classic is set...
APPAREL・6 DAYS AGO
USA TODAY Sports Media Group

Nike’s new Air Jordan 1 Low G golf shoe is available on the company’s website starting at 10 a.m. ET on Thursday but if the in-store shopping frenzy over the shoes in Korea is any indication, these are going to be a hot item. According to a story...
APPAREL・7 DAYS AGO
Footwear News

Images of the Air Jordan 12 ‘Playoffs’ Have Surfaced

An iconic Air Jordan 12 style is returning to sneaker stores soon. Sneaker leak social media account @zSneakerheadz shared images of Michael Jordan’s 12th signature basketball shoe in the original “Playoffs” colorway, a style that debuted in 1997. Jordan Brand confirmed in December that the Air Jordan 12 “Playoffs” will be returning in February as part of the brand’s spring 2022 Air Jordan retro collection to celebrate the shoe’s 25th anniversary. The sneaker will release in conjunction with this year’s NBA All-Star Game in Cleveland, OH, which was the same location and event where the NBA legend first laced up the style...
NBA・2 DAYS AGO

The Nike ACG Air Mada launched in 1994 and will return in 2022. Releasing in several colorways, one of the upcoming drops comes dressed in Black and Dark Teal. This ACG Air Mada Low comes with Black mesh on the base, while Dark Teal drapes the leather overlays. Following, we have pull tabs on the tongue and heel while ACG branding adorns the lateral side. Lastly, Black runs across the midsole and trail rugged outsole.
APPAREL・2 DAYS AGO
hypebeast.com

After surfacing last month, ‘s latest React model, the React Atlas, has now received an “Olive/Aqua” colorway. Set to help introduce the footwear silhouette, the upcoming release features a deep green molded foam upper accented by hits of light blue. Additional detailing comes in the form of burgundy, yellow and orange by the plastic heel counters and heel tabs, toe caps, black overlays, sockliner and rope laces. Aside from the Swooshes at midfoot and heel, printed insoles serve as branding on the shoe. Finishing up the design of the Nike React Atlas “Olive/Aqua” are black React sole units featuring bulbous segments in “Aqua.”
APPAREL・8 DAYS AGO
Highsnobiety

After a typically strong end to the year last year, we were half hoping that Jordan Brand would take it easy for at least the first month of 2022. To our dismay, and our bank account’s severe disapproval, the Nike Jordan 4 Retro Red Thunder drops on January 15, and StockX has given us the chance to cop our pair early.
SHOPPING・10 DAYS AGO
HollywoodLife

Kanye West shared two new photos, including one with the Michael Jordan jumpman logo and one with a comment from the basketball legend’s son Marcus asking his father to collaborate with him. Kanye West, 44, teased a possible future collaboration with Nike and Michael Jordan in his latest post!...
NBA・1 DAY AGO

In 2021, sportswear brands across the board made major moves to consistently outdo themselves with the release of countless footwear collaborations, stunning GRs and more, and the new year is already looking bright in terms of what’s to come. We’re now in the second week of 2022, and the next several days are going to see a range of impressive new launches from imprints such as.
APPAREL・12 DAYS AGO
sneakernews.com

Grey, Black And Blue Land On The Nike Air Max 90

While no longer celebrating a milestone anniversary, the Nike Air Max 90 continues to boast notable attention from both the Swoosh and sneaker enthusiasts of all kinds. Recently, the 32-year-old design has appeared in a mix of black, grey and blue tones. Akin to previously-seen propositions prepped for autumn, the...
APPAREL・12 DAYS AGO
hypebeast.com

Dropped its latest Air Max 95 silhouette in an earthy “Ironstone” colorway, adding a mesh overlay to the upper for added texture. This new iteration features brown suede at the toe and a tiered gradient mesh overlay across the side panels, contrasted by yellow eyelets, crisp, white laces, and a chunky rubber sole. A yellow swoosh near the heel completes the set.
APPAREL・3 DAYS AGO
hypebeast.com

Nike Preps the Air Max 90 in a Springtime Colorway

Following a winter-themed edition dubbed as the “Snowflake,” looks to update its catalog for Spring with a new Nike Air Max 90 in an Easter-appropriate colorway. While the orange and pink color scheme has been used in a number of ways on the sportswear giant’s classics, the current design at hand bears a similar palette resemblance to the Air Max 1 “Atomic Mango/Pink Glow.”
APPAREL・6 DAYS AGO
SneakerFiles

Recently, we showcased the ‘Blue Camo’ Dunk High and Nike Sportswear will release a pair of the Air Force 1 in a similar theme, but with an added shroud. This Nike Air Force 1 Low comes with Black leather on the base while Royal Blue lands on the liner and heel tab. Sticking out the most, we have a large Blue shroud. Next, White appears on the Swoosh logos, midsole, and rubber outsole while a grid textile runs down the tongue. Other details include camouflage accents and a Metallic Swoosh zipper.
AEROSPACE & DEFENSE・13 DAYS AGO
SneakerFiles

Nike will debut a wide range of Dunks throughout 2022 which includes a few classic color options and new themes. One of the upcoming drops will feature a mixture of White, Grey, and Brown. Looking closer, this Nike Dunk Low features White leather on the upper while Light Brown nubuck...
APPAREL・11 DAYS AGO
SneakerFiles

Nike Sportswear will debut a new colorway of the Air Max 95 that features shades appropriately connected to the colder months. This Nike Air Max 95 features leather, suede, and mesh while highlighted in shades of Blue and Brown. Next, we have an embroidered Swoosh by the heel in Brown with the same shade across the midsole. Other details include 3M reflective on the heel and a Grey rubber outsole.
APPAREL・13 DAYS AGO
Sole Collector

In addition to what’s already expected to be an exciting year of releases for the Air Trainer 1 that’s largely fueled by Travis Scott's forthcoming collabs, Nike is also set to debut a new version of the model soon. Pictured here is a first look at the latest...
LIFESTYLE・12 DAYS AGO
HipHopWired

Could the long awaited Adidas/Jordan collaboration be on the way? Will Yeezy be leaving Adidas for Jordan brand? Are the OG Air Yeezy's going to finally be getting retro'd as we've been pleading for for the past few years?
BEAUTY & FASHION・2 DAYS AGO
sneakernews.com

Though previously a leaked sample with no certainty of release, the Nike Dunk Low “Barber Shop” has just appeared in grey via official images, effectively confirming the colorway’s 2022 arrival. And unlike its black-colored counterpart, the pair casts a much brighter light on its nods to the trade.
APPAREL・12 DAYS AGO
sneakernews.com

This year, the Jumpman may close the book on the Jordan Series .01, replacing it with a much taller, mid-top version. And to make its debut all the more exciting, the brand new silhouette will offer its very own “Cool Grey” colorway. While not quite as alluring as...
APPAREL・12 DAYS AGO
SneakerFiles

Nike Sportswear will launch a new React model, known as the React Atlas. Although the model has gotten off to a slow start, we have another colorway set to launch which comes highlighted in ‘Olive.’. This Nike React Atlas comes highlighted with Olive across the molded foam upper while...
APPAREL・8 DAYS AGO