FRISCO In more ways than one, Dak Prescott captained his Dallas Cowboys to Sunday’s 43-3 rout of the Atlanta Falcons.

Michael Irvin would like his pal Dak to captain his Cowboys in one less way.

The reason for the Cowboys Hall-of-Fame legend’s public admonishment of Dak? The Cowboys were already ahead late in the game by a record-breaking margin … and the Cowboys simply didn’t need the team MVP to put his body at risk … and it was at risk, as Prescott was pin-balled about as he bulled his way into the end zone.

Dak - who to the credit of coach Mike McCarthy exited the blowout after that (only putting his face in harm’s way thanks to a “hurtful hug” from teammate CeeDee Lamb) - of course disagrees with Irvin.

Said Prescott: “I had to re-establish some toughness.”

At this point in Prescott’s career, he’s wrong about needing to “establish” something that is clearly part of his makeup.

Locked On Cowboys: Week 10 All-22 Review

Still, this is football. And if a Dak action can be an inspiration to teammates. …

Yes, even if the Cowboys hadn’t gotten that touchdown, they still would’ve been up more than 30 points early in the fourth quarter.

But for the 7-2 Cowboys, there is surely a wise balance here. Dak stayed in the game last week while Dallas got blown out by Denver, to much criticism. And now there is this criticism - all out of concern for the fact that as 2020 proved, Dallas isn’t Dallas (Cooper Rush’s recent win at Minnesota notwithstanding) without Prescott.

Said Dak: “I (said) earlier in the year, certain plays, certain positions on the field, I’m going to go back to my instincts and (I’m) going to get the touchdown or the first down. But being smart about it.” 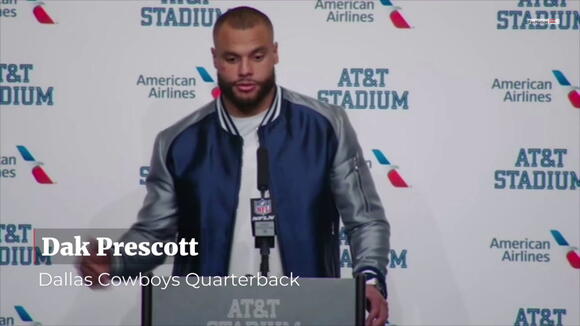 FRISCO - The Dallas Cowboys are coming off a triumphant season in which they finished 12-5, won the NFC East and are preparing for a home playoff game. So why are we talking about the possibility of firing the head coach?. “My answer,” writes respected SI colleague Albert Breer in...
NFL・2 DAYS AGO
Sportsnaut

Super Bowl 2022: The Tampa Bay Buccaneers are the reigning NFL champions, but who'll make the playoffs — and lift the Lombardi Trophy at the end of this season?
NFL・12 HOURS AGO
The Big Lead

The Dallas Cowboys lost to the San Francisco 49ers in the dumbest way possible Sunday afternoon. The Cowboys were on a late drive in an attempt to steal a last-second win in the Wild Card round, made a terrible play-call, then had an official cost them precious time as they tried to stop the clock. It was freaking wild.
NFL・15 HOURS AGO
FanSided

Jerry Jones reaction to loss: Dallas Cowboys owner sent a stern message that sure sounded like a direct shot at Mike McCarthy after Sunday’s loss. Let’s spare hyperbole: The Dallas Cowboys playoff loss on Sunday afternoon was nothing short of embarrassing. Dallas entered the postseason with its sights...
NFL・15 HOURS AGO

FOX NFL broadcaster and former Cowboy great Troy Aikman didn’t seem to be too happy that he and Joe Buck were in Tampa Bay rather than Dallas. As Buck teased the next Sunday NFC playoff matchup between the Cowboys and 49ers on CBS, Aikman voiced his displeasure with some coded language.
NFL・19 HOURS AGO
Audacy

Video captured by fans at AT&T Stadium shows trash being thrown toward the officials after the ending of the Cowboys’ 23-17 loss to the 49ers on Sunday.
NFL・15 HOURS AGO
Sports Illustrated

Prescott did not hold back when asked about fans throwing trash at officials after the game, and the football world had plenty to say about it.
NFL・12 HOURS AGO
Insider

The Cowboys looked like they would get a shot at one final play to win the game. Instead, a referee fumbled through the line, and the clock ran out.
NFL・15 HOURS AGO

FRISCO - San Francisco pass rusher Nick Bosa is continuing a running theme regarding the thinking on Sunday’s NFL Playoffs visit to the Dallas Cowboys. “They are definitely beatable,” Bosa said specifically of Dallas’ offensive line. “There’s tape on them getting beat.”. Is that outrageous?...
NFL・2 DAYS AGO
105.3 The Fan

One of the major talking points heading into Sunday’s playoff matchup between the 49ers and Cowboys at AT&T Stadium has been about the crowd, and whether or not Dallas will have a home-field advantage.
NFL・2 DAYS AGO
105.3 The Fan

We’re now just two days away from the end of a painfully long wait for the Cowboys and the 49ers to kickoff at AT&T Stadium. Read more on 1053thefan.com
NFL・2 DAYS AGO
CowboyMaven

FRISCO - George Kittle is a household name and a perennial Pro Bowler. Jayron Kearse … well, isn’t. Sunday could, if the Dallas Cowboys have their way, change all of that. "I'm ready for the task, but he has to go against me, too," said Kearse, a pivotal Dallas defender in this weekend’s NFL playoff game. "I kind of get ticked off when I'm being asked 'Kittle this, Kittle that.'
NFL・2 DAYS AGO

Kyle Shanahan and Dan Quinn were once on the same staff in Atlanta. Now they face each other in an NFC wildcard game. It's versatility on versatility.
NFL・2 DAYS AGO
NJ.com

Dallas Cowboys fans were not happy. Their team had just lost to the San Francisco 49ers in embarrassing fashion, botching a comeback with a highly-questionable final play. They reacted by throwing trash onto the field at AT&T Stadium as the officiating crew and players exited down the tunnel. One video...
NFL・14 HOURS AGO
95.7 The Game

A number of NFL futures bets can be placed throughout the 2021 NFL season, but Super Bowl odds are where
NFL・1 DAY AGO
San Diego Union-Tribune

Cowboys back in playoffs with older, wiser Prescott, Elliott

ARLINGTON - Dallas Cowboys bosses Jerry Jones and Mike McCarthy agree that this playoff loss on Sunday, the favorites falling to the San Francisco 49ers 23-17 in maddening fashion at AT&T Stadium, represents underachievement. Do they also agree that it means coach McCarthy should be on the hot seat?. Following...
NFL・14 HOURS AGO
CowboyMaven

An expanded NFL playoffs field gets to begin a quest for Super Bowl LVI this weekend. SI offers a breakdown of each first-round postseason matchup, including, of course San Francisco at Dallas ... Las Vegas Raiders vs. Cincinnati Bengals. Saturday 3:30 p.m. CT | NBC. The Raiders won four straight...
NFL・2 DAYS AGO