This Is the Largest Car Company in the World 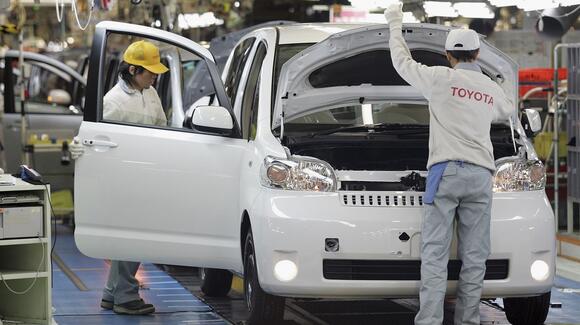 There was a time when the car universe seemed to revolve around Detroit's "Big Three" of General Motors, Ford and Chrysler. The U.S. car market was by far the largest in the world, much larger than Japan's or China's, and it dwarfed car sales in any European country. The U.S.-centric view of the auto world is no longer accurate and ended about 50 years ago. China is now the world's largest car market. Domestic car companies sell fewer vehicles than some Japanese and German brands in the U.S. market. Recently, Toyota began to sell more cars per month in America than GM.

Most of the world's largest car companies are no longer domestic. Dutch automotive company Stellantis owns Chrysler and its Jeep, Dodge and Ram brands. Several car companies based in Europe and Japan are comparable in revenue to GM and Ford.

USwitch's recently released " Car Brand Earnings " research report points out that about 56 million cars and light trucks were sold worldwide last year. The companies that control much of these sales have multiple brands. Some of their cars carry different brands from country to country. Volkswagen, for instance, owns the Audi, Bentley, Bugatti, Lamborghini, Porsche, Seat, Cupra, Ruf, Škoda and Volkswagen banners.

The landscape of the car brand world is also being altered by the rise in sales of electric vehicles. Tesla was a tiny car company five years ago. In its most recently reported quarter, it had revenue of almost $14 billion.

U.S. car companies are not among the top five manufacturers in the world based on last year's numbers. Ford had revenues of $125 billion, while GM's were $121 billion.

Two of the world's largest car companies are German and three are Japanese. Tesla, amazingly, has moved into 16th place, ahead of China's Geely.

Click here to read about the fastest-selling cars in America right now.

Americans are more demanding than drivers in Germany or China, it turns out.
CARS・21 HOURS AGO
The Motley Fool

Both EV stocks are up over the last year but have slipped in recent weeks along with the broader market.
ECONOMY・20 HOURS AGO
San Diego Union-Tribune

General Motors says it wants to add more than 8,000 technical workers this year
BUSINESS・12 HOURS AGO
The Motley Fool

These three EV stocks all show long-term promise, but which one looks best as a near-term investment?
ECONOMY・16 HOURS AGO

Many current names will remain, but look for a few newcomers to crack the list.
STOCKS・19 HOURS AGO
Los Angeles Times

Tesla posts record profits as its deliveries soared in 2021

Tesla Inc. on Wednesday posted record fourth-quarter and full-year earnings as deliveries of its electric vehicles soared despite a global shortage of computer chips that has slowed the entire auto industry.
AUSTIN, TX・8 HOURS AGO
The Motley Fool

Why Auto Parts Stocks Are a Must-Buy for 2022

The semiconductor shortage will ease, and automakers are preparing to ramp up production in the coming years.
ECONOMY・16 HOURS AGO

Bentley is pushing forward with plans to electrify its lineup and make its production facilities greener.
BUSINESS・7 HOURS AGO
MarketWatch

Tesla earnings: News about the Cybertruck and new factories could set the tone for 2022

Tesla Inc. is scheduled to report fourth-quarter earnings next Wednesday, as investors expect a return of Chief Executive Elon Musk to the post-results call and brace for what could be worrying news for the Cybertruck and supply-chain snags.
HAWTHORNE, CA・1 DAY AGO
The Independent

The number of cars built in the UK last year fell to the lowest total since 1956 as the industry suffered a “dismal” 12 months, new figures have revealed.Production was down by 6.7% over the year to 859,575, and down by a third compared with the pre-pandemic 2019 figure.The Society of Motor Manufacturers and Traders (SMMT) said issues such as the shortage of semi conductors, the closure of Honda’s Swindon factory, Covid-related issues like staff shortages and border controls following Brexit had all affected carmakers.Factories had to reduce or pause production as they waited for parts hit by the global...
ECONOMY・7 HOURS AGO
The Motley Fool

It's the Fed, but it's not just the Fed.
ECONOMY・1 DAY AGO
GOBankingRates

Automotive and manufacturing giant General Motors announced on Friday it will bring a $154 million investment to an electric vehicle motors plant in western New York. The money will go towards the...
LOCKPORT, NY・2 DAYS AGO
24/7 Wall St.

The Longest-Lasting Cars on the Road

Cars are intended to be a long-term purchase. Whether they are used mostly for commuting to and from work, driving the kids to school and other activities, running errands or all of the above, most car owners keep them for years. While some models break down much faster than average, others are longer lasting than […]
BUYING CARS・2 DAYS AGO
24/7 Wall St.

This Is The Slowest Car In America

Stories about cars are so popular that several media outlets have been supported by writing about them for years. At the head of this list are Motor Trend and Car and Driver, but hundreds more websites and magazines cover cars. Among the most written about aspects of individual models is how fast they are. Usually, […]
CARS・2 DAYS AGO
The Motley Fool

Will This Beaten-Down Stock Bounce Back? 3 Things to Know

Nio stock is down about 30% in the last six months. Is it time to buy?
ECONOMY・2 DAYS AGO
The Motley Fool

After a Terrific 2021 Performance, Ford Is Set Up to Continue Supercharging Its Business

Traditional automakers are putting on a full-court press in an effort to win the EV market share from Tesla.
ECONOMY・2 DAYS AGO
notebookcheck.net

The NIO ET7 and ET5 performance sedans that are sizing up Tesla's Model S Plaid won't be the first electric cars with semi-solid state batteries, as a humble taxi fleet just got its first delivery of EVs with such packs. Made by the world's largest lithium producer Ganfeng, the E70 electric cars' battery packs are made with solid electrolyte diaphragm.
CARS・2 DAYS AGO
ZDNet

Intel plans for largest chip manufacturing site in the world

Intel is committing to building a new chip manufacturing plant that would be the largest in the world. According to TIME, the company has plans to spend $20 billion on a 1,000-acre site near Columbus, Ohio. The project includes two chip fabrication plants (or fabs) that would focus on research and development alongside manufacturing semiconductors amide the global shortage.
COLUMBUS, OH・5 DAYS AGO
thetrendspotter.net

35 Fastest Cars in The World Today

Thrill-seekers, rev-heads, and car-enthusiasts unite – it’s the world’s fastest cars. Spanning a range of years and manufacturers, the one thing these absolute beasts have in common is a need for speed. They also combine state-of-the-art technology, more power than any regular person really needs, and otherworldly design that takes luxury and aerodynamics to a whole new level. Each is a demonstration of the passion, skill, knowledge, and innovation of the respective production houses. Hop in, buckle up, and get ready for the ride of your life!
CARS・7 DAYS AGO