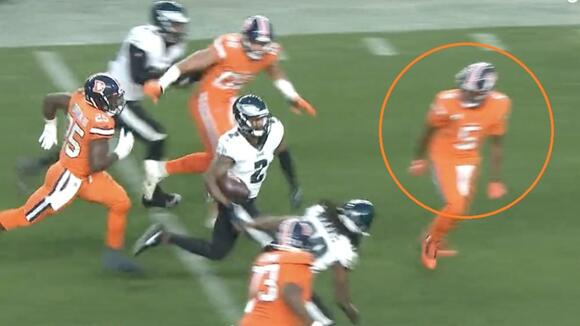 Trailing by seven points late in the third quarter of Sunday’s game against the Philadelphia Eagles, the Denver Broncos faced a 4th-and-1. Denver opted to go for it, handing the ball off to veteran running back Melvin Gordon.

Gordon ran into a pile and then fumbled the ball. Eagles cornerback Darius Slay recovered the fumble and then returned it 82 yards for a touchdown to give Philly a 14-point lead going into the fourth quarter.

Broncos quarterback Teddy Bridgewater had an opportunity to at least slow Slay down, but he pulled back, a choice that fans and pundits deemed a “business decision” on social media.

Following a 30-13 loss, Bridgewater was asked about the play.

“As I see it, I see a guy trying to block, and I’m just thinking, hey, man, maybe I can force the ball back inside and one of our guys can make the tackle.”

Broncos coach Vic Fangio said in his post-game press conference that he did not have a clear view of the return. After watching the film, Fangio will likely be asked about Bridgewater’s effort again on Monday.

As the team enters its bye, that play — and Bridgewater’s decision — will be the hot topic in Denver this week.

Who could the Atlanta Falcons add through free agency to upgrade right tackle?
NFL・2 DAYS AGO
Sportsnaut

By our unofficial count, a dozen former Denver Broncos players will be involved in the divisional round of the NFL playoffs this weekend. In the AFC, nose tackle Kyle Peko and punter Brett Kern of the Tennessee Titans will take on the Cincinnati Bengals and quarterback Brandon Allen (who won’t be playing unless something happens to starter Joe Burrow).
NFL・6 HOURS AGO

Teddy is the best bridge QB to the future

The books are closed on the 2021 season for the Denver Broncos and they certainly have a lot of questions that need to be answered in what assuredly will be a busy offseason. One of those questions could be easier to solve if they re-sign one key contributor: Teddy Bridgewater.
NFL・2 DAYS AGO
Sportsnaut

The Denver Broncos are set for an important offseason that could have a major impact on their franchise. We’re not
NFL・4 HOURS AGO
Sportsnaut

At the ripe age of 44, Tampa Bay Buccaneers quarterback Tom Brady is doing things that those 20 years younger
NFL・2 DAYS AGO

Cowboys legend Michael Irvin has made it well known he wants Mike McCarthy fired. In fact, there’s three coaches in particular he’d fire McCarthy for, but his wishes are a bit far fetched. The Cowboys suffered yet another early-playoff exit last weekend in a loss to the 49ers....
NFL・22 HOURS AGO
Sportsnaut

The Cleveland Browns’ season didn’t end the way they wanted it to, as the franchise took a step backward from their 11-5 campaign last year to fall to 8-9. One of the big reasons for the Browns’ step back was the performance of quarterback Baker Mayfield, who noticeably struggled as he attempted to play through a nagging shoulder injury. Mayfield’s struggles opened up the rumor mill to a possible Browns trade, to which an anonymous NFL executive responded to with a stern warning to Cleveland, via Jeremy Fowler of ESPN (h/t Browns Wire):
NFL・1 DAY AGO
The Spun

Cincinnati Bengals coach Zac Taylor was on the Texas A&M and Miami Dolphins staffs when Tennessee Titans quarterback Ryan Tannehill was there.
NFL・2 DAYS AGO
Sportsnaut

NFL star Nick Bosa says his fish-heavy diet is the reason he is the leanest player on his team, despite weighing 266 lbs

San Francisco 49ers defensive end Nick Bosa has the lowest fat percentage on his team, despite being one of the bulkier players. He credited his diet.
NFL・2 DAYS AGO
Sportsnaut

The retirement of longtime starting quarterback Ben Roethlisberger has left the Pittsburgh Steelers with a gaping hole at the QB position. But according to popular football video game “Madden 22,” that QB1 position will be filled by an intriguing name this coming season. The game’s franchise simulator seems...
NFL・1 DAY AGO
Sportsnaut

The 2021 NFL regular season is over and playoffs are in full swing, which brings us to one of our
NFL・2 DAYS AGO
On3.com

Pittsburgh Steelers head coach Mike Tomlin wasn’t giving much away about the future for the team at the quarterback position. Tomlin addressed a reporter’s question about going after a rookie or perhaps a veteran free agent with a little coach speak. “Right now, all options are on the...
NFL・2 DAYS AGO