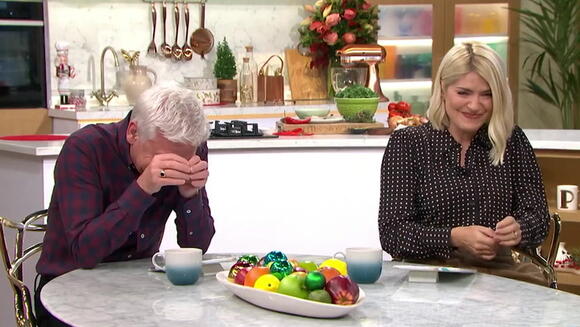 Holly Willoughby and Phillip Schofield have had their fair share of funny moments on This Morning . And another one to add to the list of the pair’s most hilarious on-air incidents is an especially windy segment from today’s show.

The hosts were in stitches this morning after guest agony aunt Miriam Margolyes let off a massive fart.

The Harry Potter star let one rip during a commercial break, which caused Schofield and Willoughby to crack up.

As the show returned after a break, the camera panned into the set as Schofield can be heard struggling to get his giggles under control.

Willoughby slapped him playfully as he wheezed: “I can’t. I can’t act professionally, I should pull myself together but Miriam has just had the most enormous fart.”

Willoughby also chuckled silently and wiped a tear from her eye.

Laughing along, Margolyes said: “You outed me.”

“You outed it,” Schofield quipped back.

Twitter found Margolyes’s flatulence and her response hilarious, with one user referring to her as a “tonic” while several others called for her to be a permanent fixture on the show.

One Twitter user wrote: “I think Phillip and Holly need to do a late-night show! Then they can be as naughty as they want and let Miriam let rip in more than one way.”

When she wasn’t making us laugh this morning, the straight-talking actor was dispensing pearls of wisdom.

When a viewer asked how she could get her husband off the couch, Maygolyes told her to leave him.

The no-nonsense actor said not to waste two seconds on “a man like that” and to “chuck him out”.

“If he doesn’t listen, if he doesn’t care, there isn’t a middle ground. He doesn’t see you as a human being,” she said.

Never has a truer word been spoken.

Following news that Strictly Come Dancing star Oti Mabuse will be joining Dancing on Ice as a judge, co-host Phillip Schofield has given his verdict. The Strictly dancer was confirmed to be signing up for Dancing on Ice in December, and revealed that it was "an honour" to join the ITV show.
CELEBRITIES・9 DAYS AGO
Hello Magazine

If Holly Willoughby's wearing it, we want it. On Thursday, the This Morning presenter rocked a striking polka dot dress from one of the Duchess of Cambridge's favourite brands. Taking to Instagram to share details of her bold ensemble, Holly looked sensational wearing a figure-flattering dress from RIXO's latest collection....
BEAUTY & FASHION・8 DAYS AGO
Hello Magazine

This Morning's most popular presenter Holly Willoughby may appear to lead a life of luxury, but when it comes to mealtimes the down-to-earth star likes to dine on chicken kiev and "processed cheese slice[s]". During the latest episode of Saturday Kitchen hosted by celebrity chef Matt Tebbutt, 40-year-old Holly was...
CELEBRITIES・12 DAYS AGO
Daily Mail

She's a daytime TV fashion icon whose eye-catching outfits can spark a high-street sales boom, but Holly Willoughby has called time on women being judged for their wardrobe choices. The This Morning presenter's comments are likely to be cheered by female fans, even though her lucrative deals to promote fashion...
BEAUTY & FASHION・6 DAYS AGO

Holly Willoughby, 40, posted a cryptic caption about 'new beginnings' musing that 'maybe it's time to press pause' on Friday. The presenter took to Instagram to share a picture of her new book 'Reflections' with her followers as well as the mysterious prose alongside. She penned: 'New year… new beginnings…...
BOOKS & LITERATURE・13 DAYS AGO
Hello Magazine

Holly Willoughby gave fans a sneak peek into family time ahead of her return to This Morning after a three-week break. Taking to her Instagram page on Sunday, the TV star shared a sweet snapshot of her youngest son Chester trying to spell out the word to her lifestyle website, Wyldemoon, with a set of alphablocks letter tiles.
BEAUTY & FASHION・11 DAYS AGO
The Independent

Phillip Schofield has recalled an accident suffered by Dancing on Ice contestant Bez, which saw his helmet “fly off” after hitting the ice.The Happy Mondays percussionist and dancer, real name Mark Berry, was rehearsing ahead of his appearance in the new series, beginning on ITV this week.Dancing on Ice host Schofield said, as per The Sun: “You have a rink that is full of essentially blades and we know how dangerous they can be and how deeply they can cut and how sharp they are. “I’ve just watched a video of Bez on his second day fall over backwards...
ACCIDENTS・10 DAYS AGO
Hello Magazine

Holly Willoughby admits to having major issue with pet puppy

Holly Willoughby loves to share snippets of her personal life every now and then, and today is no different as the This Morning star admitted that she's been struggling with her Golden Retriever puppy, Bailey, who is refusing to go out on walks. Speaking to dog behavioural expert Graeme Hall...
PETS・10 DAYS AGO

Holly Willoughby has been granted two and a half weeks off from This Morning to co-host a new BBC show, according to reports. The presenter, 40, will be appearing alongside Lee Mack, 53, to co-host Wim Hof's Superstar Survival. The sought-after TV star will be flying out to Southern Europe...
CELEBRITIES・13 DAYS AGO
Hello Magazine

Holly Willoughby has recalled the sweet moment she realised she was falling in love with her husband Dan Baldwin, whom she married in 2007. Chatting as a guest on Loose Women on Thursday, Holly revealed that she met her now-husband while working on the children's entertainment show Ministry Of Mayhem in 2004, which Dan was producing at the time.
CELEBRITIES・8 DAYS AGO
Daily Mail

Susanna Reid has reportedly become the highest paid woman on British TV, after inking a new £1.1 million per year deal with ITV to stay on Good Morning Britain. The Sun reports that the presenter, 51, now out-earns Holly Willoughby, who allegedly rakes in £730,000 a year for her This Morning role in comparison.
CELEBRITIES・14 DAYS AGO
Hello Magazine

Holly Willoughby's revolutionary hack for waking up for This Morning revealed

On Tuesday's instalment of This Morning, Holly Willoughby revealed exactly how she ensures she's up on time for the show each morning – with the help of a sunrise alarm clock!. The revelation was made during a sleep segment on the show, discussing how to get the best night's...
CELEBRITIES・9 DAYS AGO

Eamonn Holmes has split from his long-term talent agency after concluding that it was prioritising his daytime TV rival Phillip Schofield over him. Mr Holmes is no longer represented by YMU, which has strong links with ITV – the broadcaster that axed him from This Morning last year. Sources...
CELEBRITIES・13 DAYS AGO
The Independent

Fans of the ITV chat show This Morning were surprised to see regular presenter Holly Willoughby absent from today’s (17 January) instalment.The presenter, who normally hosts alongside Phillip Schofield, is taking a two-week sabbatical from the series in order to film a new project for the BBC.Schofield was instead joined by former Saturdays Rochelle Humes. Willoughby’s absence, however, was not addressed until partway through the show.The pair opened the show by interviewing a skateboarder who had gone viral on the internet.After concluding the segment, Schofield addressed viewers, telling them: “Rochelle is here, as you can see, keeping Holly’s seat...
CELEBRITIES・4 DAYS AGO
The Independent

Phillip Schofield has joked that Boris Johnson should consider joining Dancing on Ice as he “looks at different career options”, amid calls for the prime minister to step down.The Tory leader is currently facing pressure to resign after apologising for attending an illegal party at No 10 in May 2020.While Johnson insisted that he hadn’t known the “bring your own booze” event was a party and had assumed it was a work event, members of Johnson’s own party – as well as Labour and the Liberal Democrats – have called on the PM to step down.Speaking to Metro.co.uk ahead...
CELEBRITIES・7 DAYS AGO
Hello Magazine

Phillip Schofield has revealed the one strange object that Dermot O'Leary keeps in his dressing room toilet during This Morning's show on Thursday. Following an ITV advert that promoted This Morning's Friday show, hosted by Dermot O'Leary and Alison Hammond, Phillip told Holly Willoughby that the former X-Factor presenter keeps a large ring light in the toilet of his dressing room.
BEAUTY & FASHION・8 DAYS AGO
prima.co.uk

Holly Willoughby’s style has long been the envy of countless admirers, but fans can also get the lowdown on the makeup she wears. Holly’s trusted makeup artist Patsy O’Neil lists the products she uses on the This Morning host on her Instagram Page or Wylde Moon, Holly’s lifestyle online lifestyle magazine.
MAKEUP・2 DAYS AGO
prima.co.uk

Holly Willoughby delighted fans with a new selfie shared to her Instagram profile on Thursday (20 January). The This Morning presenter sparkled in a sweet slate-grey zip-up cardigan covered in stars, paired with a simple grey top and a star and moon necklace from her Wylde Moon range. The mum-of-three...
BEAUTY & FASHION・18 HOURS AGO
Hello Magazine

Dancing on Ice is back on our screens for a new series, and as well as providing entertainment witnessing the likes of Sally Dynevor and Brendan Cole take to the ice rink, the ITV show also provides a surprising amount of fashion inspiration for brides. Host Holly Willoughby has regularly...
BEAUTY & FASHION・5 DAYS AGO
Hello Magazine

This Morning's Holly Willoughby has unveiled her personal décor at her £3million family home in a rare virtual appearance. When promoting her lifestyle brand Wylde Moon, Holly uploaded some snapshots from when she recorded a podcast at her own home. Behind the blonde-haired beauty, a white wall was visible which had been decorated with multiple picture frames. The pictures seemed to be photographs of idyllic locations – perhaps places Holly has visited on her travels.
CELEBRITIES・4 DAYS AGO