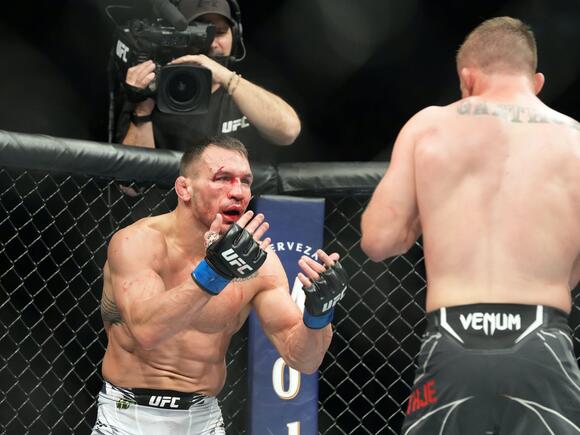 The two lightweights combined to throw 451 strikes, many of which were shots deemed significant by official UFC statistics, for 15 minutes over three rounds.

The match was the first fight on the main card of the 14-bout UFC 268 event that took place November 6 inside Madison Square Garden, New York City.

Both fighters left the arena for the hospital and posed for a selfie after the grueling battle.

Footage has recently surfaced that shows the effect Gaethje's damaging blows had on Chandler. He needed stitches for a cut above his right eye, and also on his lip.

Chandler said he made "questionable decisions" during the fight, in a statement made on Instagram last week.

"But we had a blast! Ill-advised yet entertaining is my strong suit," said Chandler. "To the fans: I appreciate your guys' support on this journey. The best is yet to come! See you at the top!"

Chandler received a $50,000 bonus check despite the defeat because of his role in a bout considered so awesome by UFC officials that the company awarded it their "Fight of the Night" honor.

The 35-year-old could also be in the running to fight Conor McGregor , the former two-weight UFC champion currently recovering from a broken leg he suffered in his second successive loss to Dustin Poirier earlier this year.

McGregor could return midway through 2022 and says he welcomes a match with Chandler in the future.

Responding to a tweet of Chandler's, which contained a mock face-off involving the pair, McGregor said: "I'm down at some stage for sure. Great fight the other night Mike, congrats!"

Justin Gaethje and Michael Chandler won the honors for BT Sport ‘Fight of the Year‘ award. But according to Gaethje’s recollection of the fight, he felt the fight was boring. Most of the fans around the world considered the fight as ‘Fight of the Year‘. But Gaethje...
UFC・7 HOURS AGO
The Independent

Conor McGregor could return to competitive action as soon as the summer of 2022, according to UFC president Dana White.The Irishman broke his tibia during his defeat to Dustin Poirier in June of last year, and has been recuperating since.White thinks that the recovery process is progressing well, and expects McGregor to be back in action before long.“I think so, yeah,” Dana told TMZ when asked if he expected the 33-year-old to fight at all in 2022. “He’s doing all the right things with his leg. I’m hoping he can come back this summer.”McGregor has been beaten in the three...
UFC・15 HOURS AGO
The Independent

Tyson Fury’s interest in a crossover bout with Francis Ngannou has not waned following the UFC heavyweight champion’s successful title defence against Ciryl Gane.Ngannou, widely considered to be the greatest power-puncher in UFC history, stunned fans and pundits on Saturday as he employed an unexpected wrestling gameplan to outpoint former teammate Gane in the main event of UFC 270.In doing so, French-Cameroonian Ngannou unified the heavyweight titles and handed interim champion Gane his first professional defeat.While Ngannou, 35, did not produce the kind of spectacular knockout that many felt he would need to win – and to boost interest in...
UFC・1 DAY AGO
The Independent

Francis Ngannou unified the UFC heavyweight titles in the main event of UFC 270 on Saturday night, beating interim champion Ciryl Gane via unanimous decision with a surprising wrestling display.Ngannou (17-3) is known for his hellacious knockout power and had never before won on points, but the French-Cameroonian scored multiple takedowns as he handed former teammate Gane (10-1) his first defeat as a professional mixed martial artist.Ngannou’s 16 previous pro wins had all come via stoppage, 12 of them via KO/TKO and most of them early in his fights. Against a much quicker and seemingly more technical opponent, the least...
UFC・1 DAY AGO

Jake Paul is down to accept Khabib Nurmagomedov’s invitation but there’s a catch. Paul has been known to ruffle some feathers within the boxing and MMA community. He’s even taken aim at UFC President Dana White over the issue of fighter pay. While Paul has done a lot of boxing as of late, he wants to have an MMA fight down the road.
UFC・1 DAY AGO
The Independent

Tyson Fury has called out UFC heavyweight champion Francis Ngannou for a boxing match.Ngannou is set to defend his title against interim champion and former teammate Ciryl Gane this month, but the French-Cameroonian has expressed a desire to return to his boxing roots.Ngannou, 35, this week named Tyson Fury as one of his dream opponents, and the WBC heavyweight champion has now responded.“Who would like to see me fight this beast, boxing rules @ufc gloves?” Fury tweeted, alongside a mock-up poster of himself and Ngannou.The Briton also tagged Ngannou and UFC president Dana White in the tweet.Who would like...
UFC・2 DAYS AGO
SPY

The first UFC fight night of 2022 is finally here. On Saturday, January 22, UFC will return with a highly anticipated Heavyweight Title fight between Francis Ngannou vs. Ciryl Gane. UFC 270 will take place at the Honda Center in Anaheim, California, and the earliest preliminaries will start at 6:15 p.m. EST. The main event is scheduled for 10:00 p.m. EST. If you want to livestream UFC 270 when it takes place tonight, then there’s only one option for streaming the fights: ESPN+ and the official UFC 270 pay-per-view event. We’ve got all of the information you need to watch UFC...
UFC・2 DAYS AGO
The Independent

Dreams of replicating the ferocious Mike Tyson drove Francis Ngannou in his unlikely journey to heavyweight glory.But while Iron Mike initially lit that fire inside him, his inspirational journey out of poverty and gruelling work at sand quarries eventually saw the Cameroonian transition to MMA after moving to Paris.His notorious power, which has inspired his destructive path to the top of the UFC somewhat belittles his craft. It obscures a newfound nuance to his game that was beautifully showcased in his rematch against Stipe Miocic 10 months ago.From a reckless brawler in love with his power at times, Ngannou, now...
UFC・2 DAYS AGO

Francis Ngannou is a fighting phenomenon: the honorary ‘baddest man on the planet’ as UFC heavyweight champion, and the most ferocious power-puncher in the promotion’s history.The French-Cameroonian’s professional mixed martial arts record stands at 16-3, while his UFC record is 11-2 since his debut in 2015 – with 10 of those wins coming via knockout or TKO.Ngannou, 35, in fact went 6-0 in the company, with five of those victories achieved via KO/TKO and one coming via submission, before he suffered back-to-back decision losses.The first of those two defeats was a humbling by then-champion Stipe Miocic, but Ngannou worked...
UFC・2 DAYS AGO
The Independent

Francis Ngannou’s hopes of securing a crossover fight with heavyweight boxing champion Tyson Fury were kept alive on Saturday night, as the UFC title holder retained his belt against Ciryl Gane.Ngannou, the consensus hardest hitter in UFC history, has long expressed frustration with his pay in the mixed martial arts promotion and has talked up a return to his boxing roots.WBC champion Fury is the French-Cameroonian’s dream opponent, and the Briton has acknowledged Ngannou’s interest and even called for a boxing match against the “Predator” with MMA gloves.Ngannou’s hopes of securing a mega-fight with the “Gypsy King” – however unlikely...
UFC・1 DAY AGO
The Independent

Jake Paul has suggested he will take an active approach in helping to improve fighter pay after Francis Ngannou’s purse was revealed following his successful heavyweight title defence at UFC 270. Ngannou, who has long expressed frustration over his pay in the UFC, retained his belt by outpointing former teammate Ciryl Gane in Saturday’s main event.It was then revealed that Ngannou had earned $600,000 for his outing in Anaheim, just days after the French-Cameroonian insisted he will no longer fight for that exact amount of money.YouTuber Paul has gone 5-0 as a professional boxer and has recently teased a UFC...
UFC・1 DAY AGO
The Independent

UFC 270 time: When does Ngannou vs Gane fight start tonight?

In the main event of UFC 270 this Saturday, Francis Ngannou makes the first defence of his heavyweight title as he comes up against interim champion and former teammate Ciryl Gane.Ngannou is 16-3 in professional mixed martial arts and 11-2 in the UFC, with all of his wins in the promotion coming via stoppage – 10 by knockout/TKO and one by submission. In his last outing, the French-Cameroonian avenged a 2018 decision loss to Stipe Miocic by knocking out the American to take his heavyweight title in March.FOLLOW LIVE: UFC 270 – latest updates and fight resultsMeanwhile, Gane (10-0)...
UFC・1 DAY AGO

UFC 270 location: Where is tonight’s fight between Francis Ngannou and Ciryl Gane?

Francis Ngannou defends his heavyweight title for the first time this weekend, when he take on interim champion and former teammate Ciryl Gane in the main event of UFC 270.Ngannou (16-3), widely considered to be the greatest power-puncher in UFC history, has achieved 10 of his 11 wins in the promotion via knockout or TKO, with the other coming via submission.FOLLOW LIVE: UFC 270 – latest updates and fight resultsIn his most recent bout, the French-Cameroonian took the heavyweight belt from Stipe Miocic in March, knocking out the American to avenge a humbling decision defeat from 2018. Gane (10-0),...
UFC・1 DAY AGO
bjpenndotcom

Maiquel Falcao, who once competed under the UFC and Bellator banners, has died after being stabbed in Pelotas, Brazil. Gaucha ZH reports that Falcao was stabbed in the stomach outside of a bar. The incident is said to have occurred around 3 a.m. local time. Falcao was taken to a hospital but he has passed away.
PUBLIC SAFETY・1 DAY AGO
Sportsnaut

In an incredible turn of events, the UFC’s king of the fast knockout saved his heavyweight championship with his grappling
UFC・1 DAY AGO
Bloody Elbow

MMA SQUARED: Francis Ngannou wins the battle of UFC 270 in the war of fighter contracts

Wow, that was a wonderful night of fights. I’ll be on Twitch at 1pm EST talking about all the fights on the main card as there were quite a number of performances! All the best moments will become part of my next book of MMA art & essays. If you’re interested in collecting my MMA artwork I’ve revamped my patreon page to allow for digital, book, ebook, and print collection now.
UFC・11 HOURS AGO
fadeawayworld.net

Michael Jordan Once Disrespected Former WWE Star Mark Henry At 1996 Olympics: "Be Careful What You Say, But Even More Careful Of How You Say It."

Michael Jordan had an incredible aura around him. People will wait for hours just to get a glimpse of ‘His Airness’. Jordan is perhaps the biggest superstar in the history of the NBA, and his crossover appeal is truly difficult to comprehend. But sometimes, the people who get to meet Michael Jordan didn’t have the best experience and even found themselves to be upset with him.
WWE・14 HOURS AGO
Sports Illustrated

Here are the top takeaways from an action-packed night inside the Octagon.
UFC・6 HOURS AGO
WFAN Sports Radio

On the latest episode of The Fight Fan, Pete Hoffman previews the highly anticipated heavyweight bout in UFC 270 with Mark La Monica of Newsday.
UFC・2 DAYS AGO
The Independent

Anthony Joshua has denied that he has agreed a £15m deal to step aside and allow Oleksandr Usyk to face Tyson Fury in an undisputed heavyweight title bout.Joshua activated a rematch clause shortly after suffering defeat against Usyk last year, but reports on Monday indicated that the former IBF, WBA and WBO champion was prepared to accept a financial package to wait and then face the winner out of Fury and Usyk. However, Joshua took to social media on Monday afternoon to deny that he had signed any step aside agreement.“You know what’s bad about all these interviews I...
COMBAT SPORTS・7 HOURS AGO