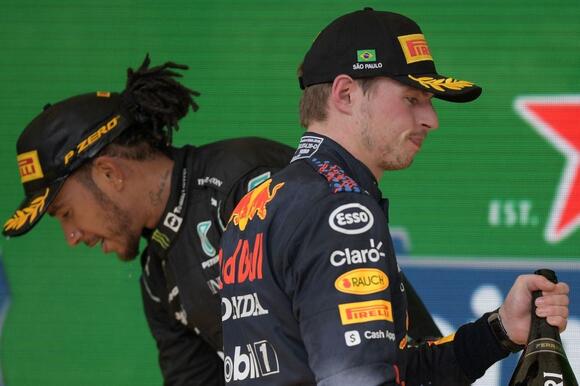 Lewis Hamilton said he was unsurprised that title rival Max Verstappen was not disciplined by race stewards in the Brazilian Grand Prix , despite forcing him off the track and into the run-off area.

The pair were locked in a battle at the front once more, after Valtteri Bottas won the sprint event to take pole position for the main race on Sunday.

Verstappen started from second, while Hamilton was 10th after going from last to fifth in the sprint following back-to-back blows to his title charge.

Firstly he was handed a five-place grid penalty for the Grand Prix itself after Mercedes opted for a new engine, then he was excluded from qualifying for the sprint after a DRS infringement. Verstappen, meanwhile, was handed a €50,000 fine after touching Hamilton’s car , a “breach of the parc ferme regulation” according to stewards.

Once the main race started, though, it was quickly back to that duo fighting for first place, with Hamilton twice trying to overtake leader Verstappen and the Dutch driver weaving across to send Hamilton off-course. The stewards noted the incident but opted against any punishment – which the Mercedes man says he knew would be the case.

“I knew when they said they were going to investigate, I just knew that that’s the decision they would come to, whether it was right or wrong,” he said to Sky Sports F1.

Questioned on whether there should have been any action, Hamilton simply pointed out it wasn’t decisive as he roared to victory in Sao Paulo , and therefore held no further interest for him after what he described as his “hardest” weekend in F1.

“I’m not going to go into that, I need to go look back at it, but it’s a racing incident at the end of the day, probably,” said Hamilton. “It doesn’t really matter, I got the result needed.

“I was just pushing as hard as I could, but from last on the grid and then another five place penalty was, I think the hardest weekend I’ve had.

“But my dad reminded me of 2004 when I was in Formula 3, in Bahrain and I started last and I finished 10th and then I finished first.

“Coming into this weekend I never thought that we would be able to close the gap like we have today.”

Verstappen’s lead at the top of the driver standings is now cut to 14 points, ahead of the season’s final races in Qatar, Saudi Arabia and Abu Dhabi.

Lewis Hamilton’s Formula One future should not be taken for granted, Zak Brown has insisted – with the McLaren boss admitting he would not be surprised if the seven-time world champion sensationally quits.More than a month on from the controversial conclusion to the Abu Dhabi Grand Prix which denied Hamilton a record eighth title, the Mercedes driver is said to be debating whether to return to the grid in 2022.Hamilton has been conspicuous by his absence from social media in the weeks since the debacle in the desert.An FIA inquiry was launched last week, but the governing body’s findings...
MOTORSPORTS・1 DAY AGO
Insider

Hamilton's usually active social media feeds have been dormant since December 11, and he has not been seen out in public since last season's finale.
MOTORSPORTS・1 DAY AGO
The Independent

Toto Wolff does not think that Lewis Hamilton will ever “get over” the controversial ending to the 2021 Formula 1 season.Hamilton was denied a record-breaking seventh world title after Max Verstappen passed him on the final lap of the season’s final race in Abu Dhabi. Verstappen had been afforded the opportunity to line up an overtake after the intervention of race director Michael Masi, who permitted lapped cars between the title rivals to un-lap themselves, clearing a path for the Red Bull driver to snatch his first Drivers’ Championship.Revealing that he and his team had been left “disillusioned” with...
MOTORSPORTS・1 DAY AGO

Roman Grosjean the former Hass Formula1 driver has recently given his opinion on the drama of the Abu Dhabi Grand Prix of the 2021 Formula1 season. It has been stated in Essentiallysports that as per Roman Grosjean, Max Verstappen deserved to win the 2021 Formula1 title given what transpired throughout the season.
MOTORSPORTS・2 DAYS AGO
The Independent

The Formula 1 off season rumbles on with the aftermath of Abu Dhabi still an intense topic in F1 circles, not to mention the link between that and Lewis Hamilton’s future. The seven-time world champion appears to be switching off after the bitter ending to the 2021 season as Max Verstappen stole a maiden world title following a thrilling final lap.But there is also much to debate and discuss surrounding both new rules for the upcoming season, as well as uncertainty surrounding who will line up on the grid.Another trend is how Mercedes, Toto Wolff and the FIA mend...
MOTORSPORTS・2 DAYS AGO
firstsportz.com

Mercedes Team Principal Toto Wolff has recently emphasized the characteristic that according to him separates Lewis Hamilton and Max Verstappen. Lewis lost out on his record eighth world title during the Abu Dhabi Grand Prix of the 2021 Formula1 season. It has been stated in automotorsport that Toto Wolff during...
MOTORSPORTS・14 HOURS AGO
The Independent

Sports stars and clubs across the world continue to provide an insight into their lives on social media.Here, the PA news agency looks at some of the best examples from January 19.TennisAndy Murray served Naomi Osaka a compliment. And she returned it.Anyone put their heart on their sleeve and fight harder than @andy_murray ? 🥺🙏🏾🔥 https://t.co/c6G2SA2Ycx— NaomiOsaka大坂なおみ (@naomiosaka) January 19, 2022Osaka was feeling arty.Lol omg 😂💀 https://t.co/SeYxBn0avu— NaomiOsaka大坂なおみ (@naomiosaka) January 19, 2022Serena had a battle on her hands.[xdelx]Denis Shapovalov struggled with a banana!Sometimes the struggle is real 😅 Sorry, @denis_shapo 🍌#AusOpen • #AO2022• #AOTennis pic.twitter.com/NYtCJkQYss— #AusOpen (@AustralianOpen) January 19, 2022Madison...
TENNIS・1 DAY AGO

The Australian Open continues without Novak Djokovic after the saga over the men’s defending champion’s visa was finally brought to an end on Sunday evening. After Australia’s immigration minister had used his discretionary power to cancel Djokovic’s visa for a second time last week, the decision was upheld by three judges at an appeal, who determined that the world No 1’s presence “may be counterproductive to efforts at vaccination by others.” Djokovic was deported on Sunday and returned home to his native Belgrade, where he “will now be taking some time to rest and to recuperate, before making any...
TENNIS・2 DAYS AGO
San Diego Union-Tribune

Top-tier motorsport and positive climate action are not concepts the general population often associates with one another. After all, how can sending out a field of high-speed cars to race around a track for a couple of hours a few times per month be anything other than a colossal contributor to environmental decline and global temperature rises?Motorsport is about speed and glory, of course, but the manufacturers who enter racing championships such as Formula One do so primarily for another reason – to use the resources, competition, and talent in motorsport to develop technologies which can be applied to road...
MOTORSPORTS・17 HOURS AGO
AFP

Australian Open chiefs said Thursday that their Covid measures were working after several players questioned the "optional" testing policy at the Grand Slam.  His remarks threw another spotlight on Covid policies at the Australian Open, which were already under scrutiny following the saga of deported defending champion Novak Djokovic.
TENNIS・14 HOURS AGO
The Independent

British BMX star Kieran Reilly has landed the world’s first triple flair.The 20-year-old, from Gateshead made history with the record-breaking trick only previously attempted on computer games.In a clip shared to Instagram Reilly wrote: “I can’t believe it. So so happy to show you all this! You can see how high emotions were just in this video.”It took Reilly around 20 tries to complete the trick, after first attempting it in May 2021.The stunt was filmed at an event sponsored by Red Bull at Asylum Skatepark in Nottinghamshire on a specially constructed roll-in and ramp.During training, changes had...
SPORTS・5 HOURS AGO