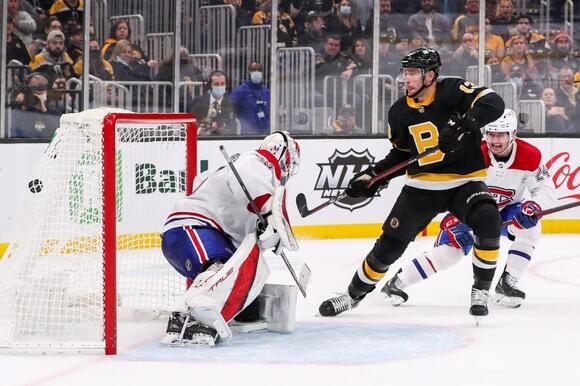 Charlie Coyle was in the right spot to put the Boston Bruins ahead for good in their 5-2 win over the visiting Montreal Canadiens in the first meeting between the two rivals in nearly two years on Sunday night.

David Pastrnak’s shot bounced off Canadiens goalie Sam Montembeault, and the rebound went to defenseman Jeff Petry, whose attempt to throw the puck out of the crease deflected off of Coyle and in to put Boston up 3-2 at 5:58 of the third period.

Coyle scored again just over three minutes later to make it 4-2 after beating a defenseman to a loose puck in the right circle, charging the net and lifting the puck past Montembeault high stick-side at 9:05. Taylor Hall added an empty-netter for Boston with 1:58 remaining.

Charlie McAvoy also had a pair of goals for the Bruins, who have won back-to-back games and five of their last seven overall. Boston rookie goalie Jeremy Swayman recorded 27 saves to remain undefeated at home with an 8-0-0 record.

Joel Armia and Michael Pezzetta each netted their first goals of the season for the Canadiens, who dropped their second straight game.

It was the first game between the Original Six rivals since Feb. 12, 2020, due to pandemic-altered scheduling.

Montembeault stopped 36 of 40 shots for Montreal. The 25-year-old goalie was called up to make the start against the Bruins following the Canadiens 3-2 overtime loss at the Detroit Red Wings on Saturday. 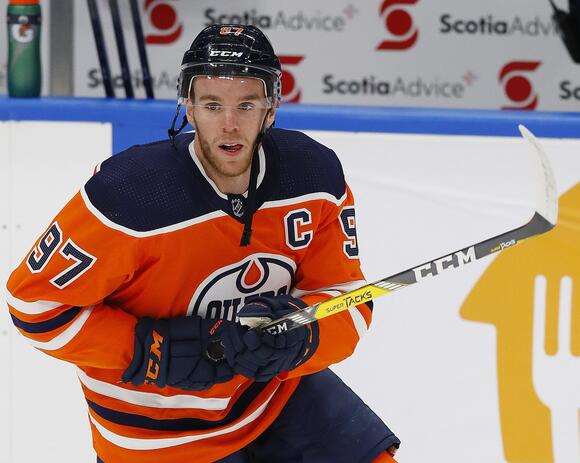 Armia scored 8:09 into the opening period after skating into the right circle on an odd-man rush and firing a wrist shot past Swayman.

McAvoy tied it at 1-1 at 8:27 of the second after gathering a loose puck in front of the net and slamming it home through traffic. Pezzetta’s deflection goal in the slot at 16:25 restored the Canadiens’ lead entering the third.

McAvoy made a wrister from the high slot for his second goal of the night on a power play at 2:14 of the third to make the score 2-2.

Brad Marchand and Sidney Crosby are notable snubs for the 2022 NHL All-Star Game, which will be held in February in Las Vegas.
NHL・2 DAYS AGO
nbcboston.com

Bergeron named to All-Star roster, Marchand snubbed originally appeared on NBC Sports Boston. Patrice Bergeron may be the lone Boston Bruins representative in the 2022 NHL All-Star Game. Bergeron was named to the Atlantic Division roster for his third career All-Star selection. Surprisingly, he wasn't selected alongside any of his...
NHL・2 DAYS AGO
CBS Boston

BOSTON (CBS) — Tuukka Rask now has 540 starts in net for the Boston Bruins. His most recent one was a lot different than the others, the goaltender admitted Thursday night. Rask said that it was an emotional experience as he made his long-awaited return for the Bruins on Thursday night, his first game in net for Boston in 218 days. The 34-year-old showed very little rust in his first game back from offseason hip surgery, stopping 25 of the 27 shots that the Philadelphia Flyers sent his way and helping Boston notch a 3-2 victory at TD Garden. Simply put, Tuukka...
NHL・2 DAYS AGO
FanSided

The Montreal Canadiens injuries have piled up mercilessly and their bout with Covid-19 just won’t seem to quit. As a result, they have had to use 33 different skaters and three separate goaltenders already this season. They aren’t even halfway through the year and the team is likely to sell off several assets before the end of the season in trades so they could end up using well over 40 different players this season.
NHL・2 DAYS AGO

BOSTON — And just like that, the Bruins find themselves up 2-0 on the Predators. Boston hosted Nashville on Saturday for some matinee hockey at TD Garden. Craig Smith got the scoring started with a slick snipe just 3:20 into the game, and Mike Reilly followed it up. Reilly...
NHL・1 DAY AGO
Sportsnaut

The NHL season officially started back on October 12. In this article, we track all the NHL games today as
NFL・8 HOURS AGO
97.1 The Ticket

Individually, Larkin has had a great season. His resurgence has been crucial for the Red Wings, who look to have a No. 1 center moving forward.
NHL・2 DAYS AGO
WGN News

CHICAGO – This is been a bit of an unusual time for a man used to playing or preparing to play the game of hockey, forcing this ten-year veteran of the NHL to look for other things to occupy his time. That’s not a bad thing for Andrew Shaw. “I spend all my time with […]
NHL・2 DAYS AGO

BOSTON (CBS) — A hockey player recording his first career NHL goal is a moment that is remembered forever. Bruins defenseman Urho Vaakanainen will be the rare player who gets to experience it twice. The 23-year-old scored what appeared to be the first goal of his NHL career on Wednesday night, sending a shot from the top of the right faceoff circle through the legs of teammate Curtis Lazar, off the blocker and back of Montreal netminder Sam Montembeault, and into the Canadiens’ net. The goal put the Bruins up 5-1 over their longtime rival, but it was a much more significant...
NHL・2 DAYS AGO
Sports Illustrated

Without NHL participation in the 2022 Winter Games, Team USA is relying heavily on teenagers, collegiate athletes and journeymen alike for its squad.
HOCKEY・2 DAYS AGO
Denver7 News KMGH

Nathan MacKinnon and Cale Makar have been selected to play in the 2022 NHL All-Star Game for the Central Division team, which will be coached by Avalanche coach Jared Bednar.
NHL・2 DAYS AGO
Sportsnaut

Colorado does not have much to be unhappy with lately, as the Avalanche are 11-1-2 since early December and boast
NHL・2 DAYS AGO
San Diego Union-Tribune

For the first time in nearly two years, the Sabres and Predators played a game against each other. On this night, it was Jeff Skinner who stole the show to help the Sabres bust up a six-game winless skid.
NHL・2 DAYS AGO
Sportsnaut

Rangers highly touted prospect Braden Schneider looks back on his day leading up to his NHL debut and his first career goal on Thursday night.
NHL・2 DAYS AGO
Sportsnaut

The Buffalo Sabres were no match for the Red Wings on Saturday night at Little Caesars Arena, as Detroit defended their home ice to the tune of a 4-0 shutout win. Kyle Powell has a complete game recap:
NHL・17 HOURS AGO
WGR550

The Sabres get Krebs back from NHL COVID-19 protocols.

Krebs was very frustrated because he never felt any symptoms, but he couldn’t get the two consecutive negative tests to get out of protocols. His girlfriend also tested positive, so they quarantined at their place in Rochester.
NHL・41 MINUTES AGO