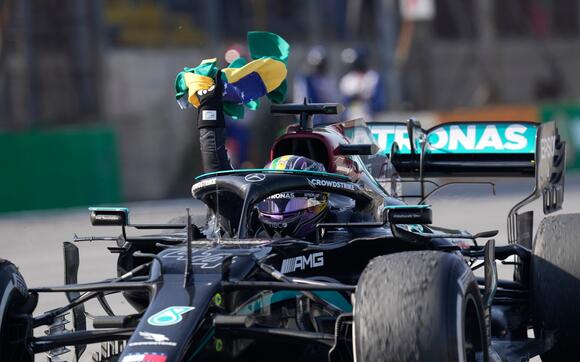 Damon Hill hailed Lewis Hamilton ’s victory at the Brazilian Grand Prix as among the greatest drives ever seen in Formula 1 .

“That was one of the best drives I have ever seen in F1 by anyone,” said Hill, the 1996 world champion. “Utterly awesome.”

Hamilton, disqualified from qualifying following a rear-wing infringement, drove from last to fifth in Saturday’s sprint race and was then demoted to 10th on the grid following his fifth engine change of the campaign. Only three are allowed.

But Hamilton was up to third by the start of lap five and then fought his way past Verstappen on lap 59 of 71 in one of the best races of the modern era.

Hamilton held the Brazilian flag aloft from his cockpit, before wrapping it around him on the podium, and then paying tribute to his once estranged father, Anthony. 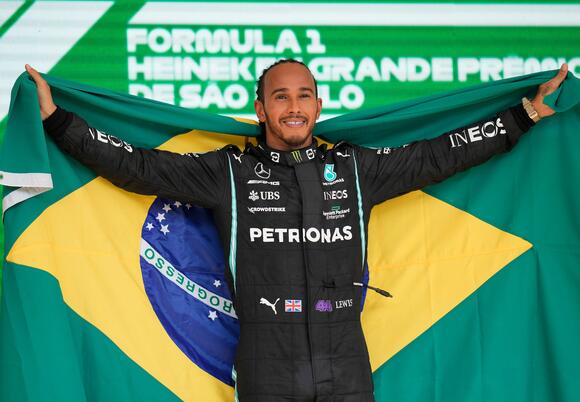 “With the penalties it was the hardest weekend I had,” said Hamilton, 36.

“But my dad reminded me of 2004 when I was in Formula 3 in Bahrain and I started 11th and then I finished first so this one is for him.

“I never thought I would be able to close the championship gap because things kept going against us. But it just shows for everyone never give up, whatever you are facing. You just have to keep pushing, never stop fighting, and that was my approach this weekend. It feels like the first because I have not won in a long time.”

Indeed, this marked Hamilton’s first triumph since the Russian Grand Prix in September and only his second following August’s summer break.

Hamilton’s Mercedes boss Toto Wolff, furious with his driver’s disqualification from qualifying for running a rear wing adjudged to be illegal by the stewards, said on the radio: “Lewis, this is how you overcome a 20-place disqualification.”

Hamilton replied: “It was actually 25, but you are right.”

The British driver will renew his championship fight with Verstappen next weekend on F1’s first visit to Qatar before back-to-back races in Saudi Arabia and Abu Dhabi in December.

“We still have a good points lead,” said Verstappen. “Today was damage limitation on a weekend where it was a bit difficult for us. But I’m confident that, in the coming races, we will bounce back.”

A lot of people are angry at Novak Djokovic And his sponsors may just wait it out.The world’s top-ranked men’s tennis player is the top seed and defending champion at the Australian Open. But it’s unclear if he can compete Monday after Australian officials again revoked his visa because he lacks a COVID-19 vaccine, leaving his attorneys to appeal his possible deportation.The Serbian, known for his gluten-free diet and use of hyperbaric chambers, isn’t giving up the fight to seek his 21st Grand Slam. It's his chance to overtake Roger Federer and Rafael Nadal as the men’s recordholder —...
NFL・2 DAYS AGO
AFP

Murray hopes for no repeat of Djokovic saga 'mess'

Andy Murray hopes the "mess" which has resulted in tennis world number one Novak Djokovic being told he is to be deported from Australia ahead of the Australian Open will not be repeated. Former world number one Murray told the BBC in Melbourne "the situation has not been good all round for anyone" and regretted Djokovic had been held in a detention facility. Murray was speaking after Djokovic lost his last-gasp bid to avoid deportation from Australia on Sunday. It ended a sensational legal battle over his coronavirus vaccination status and dashed his dream for the moment of an unprecedented 21st Grand Slam singles crown.
TENNIS・1 DAY AGO
AFP

Five men to watch at the Australian Open

The absence of nine-time champion Novak Djokovic, deported in humiliation after a visa saga and courtroom drama, leaves the Australian Open men's draw wide open. But the 13-time French Open champion swept through the field last week to win a warm-up event at Melbourne Park, and a revitalised Nadal could lift what would be only his second Australian Open trophy after his lone win in 2009.
TENNIS・1 DAY AGO
The Independent

Rafael Nadal made a convincing return to grand slam tennis as he eased into the second round of the Australian Open.The sixth seed, the only man bidding for a 21st grand slam title this fortnight following Novak Djokovic’s deportation, cut short his 2021 season in early August because of a foot problem.His only slam title in Melbourne came 13 years ago but he began the new year by winning an ATP Tour event on the same courts and brushed aside American Marcos Giron 6-1 6-4 6-2.Nadal said: “Of course, when you are getting a little bit older, all the comebacks...
TENNIS・2 HOURS AGO

Unlike other sports stars, Andy Murray won't play in Saudi

The lucrative offers tempting leading boxers, golfers and footballers to compete in Saudi Arabia are not enough for Andy Murray to put money over morality.When Murray has received approaches to fly to Riyadh to play in exhibition matches, the potential to earn millions of dollars has been rejected.The revelation on Friday came from the three-time Grand Slam winner’s agent in the week when the Spanish Football Federation has faced criticism from human rights activists for taking its Super Cup to Saudi Arabia. Barcelona, Real Madrid, Atletico Madrid and Athletic Bilbao have little say in where the mini-competition is being played....
WORLD・2 DAYS AGO
The Independent

Novak Djokovic was greeted by supporters when he arrived home in Serbia on Monday but another obstacle has been put in his path in the form of a tightening of regulations in France towards the unvaccinated.The first day of play at the Australian Open was overshadowed by the fallout from the government’s ultimately successful efforts to deport Djokovic ahead of the tournament because of his perceived threat to public health and order.The world number one left Melbourne on Sunday evening having said in a statement following the verdict of the Federal Court that he would take some time “to rest...
TENNIS・2 HOURS AGO