"Football Has Evolved, I Had No Choice" - Man City Star Describes How He Became the Perfect Pep Guardiola Player 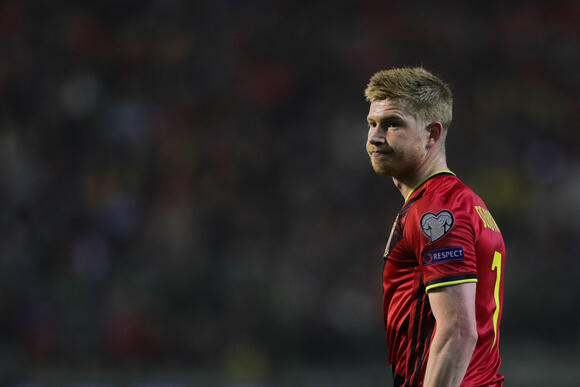 The 30-year-old has made his name as one of the best midfielders in the world since his move to Manchester City from Wolfsburg for £55 million in the summer of 2015.

De Bruyne, who won the PFA Player's Player of the Year award for the second successive season last term, has key to the Premier League champions' success under Pep Guardiola.

The Belgium international has registered 70 goals and 108 assists in 276 outings across all competitions for the Sky Blues - incredible numbers for a midfielder who's had his struggles with injury over the past few years.

In a new interview published by France Football, De Bruyne has provided an insight into what it is like playing under Guardiola, whose arrival to Manchester in 2016 has brought City major success on the domestic front.

“Here (at City), everyone attacks, everyone defends, everyone runs. Football has evolved, and so have I. Either way, I had no choice," said De Bruyne, as translated and relayed by Sport Witness.

“With Guardiola, if you send back the image of a guy who doesn’t want to run because you’re that creative guy or whatever, you don’t play. It’s pretty simple, actually."

Guardiola has publicly defended De Bruyne amid what has been described as a difficult run of form for the playmaker since his return from injury, stating that he has complete faith in the Belgian, and that he will soon be back to his best.

De Bruyne added: “I like the idea of ​​being a creative player. But, over time, I certainly became a complete player. And then, it’s the system you operate in that determines what type of individual you are.

“With Pep, it means, ‘Go for it, don’t be afraid!’ As far as I’m concerned, he says, ‘Get the ball between the lines and attack the opposing defense!’ But, basically, the idea is really, ‘Take risks!’ Otherwise, we’d be spinning the ball for ninety minutes and not much would happen.”

Manchester City walked away with a deserved 1-0 win over Chelsea at the Etihad Stadium, courtesy of a Kevin De Bruyne belter. The Sky Blues extended their lead to 13 points at the top of the table with yet another dominant display from start to finish. Speaking to the press...
PREMIER LEAGUE・2 DAYS AGO
CityXtra

While Manchester City are yet to secure the final jewel in the crown of the club's modern era, the highly-coveted Champions League trophy, the club have greatly benefited from a decade of consecutive qualifications into the competition. Whether those benefits have been financial or simply the experience a club gains...
PREMIER LEAGUE・12 HOURS AGO
The Independent

Kevin De Bruyne insists there can be no easing up now after firing Manchester City closer to another Premier League crown with a superb winner against Chelsea.The Belgian playmaker produced a moment of magic 20 minutes from time to settle a tight battle between the title rivals at the Etihad Stadium on Saturday.It was a potentially decisive blow in the race, lifting the champions 13 points clear of the Londoners at the top of the table.Regardless of whether Liverpool can cut into the lead – the Merseysiders have played fewer games and still have to visit City – it would...
PREMIER LEAGUE・2 DAYS AGO

Manchester City are ready to develop a relationship with Turkish giants Galatasaray. The Turkish giants have just changed coaches, with icon Fatih Terim stepping aside for former City assistant manager Domenec Torrent. Miliyet says City manager Pep Guardiola was involved in the move, offering his recommendation to Gala on the...
PREMIER LEAGUE・2 DAYS AGO
goal.com

'I felt like a rocket out there!' - How a sprint coach helped Man City star Foden go to another level

The Manchester City and England star employed the services of Liverpool-based Tony Clarke to make him faster and the results are there for all to see. It was a low-key conversation in a Liverpool coffee shop which ended up changing Tony Clarke’s life. “I suppose you could say I...
NFL・1 DAY AGO
World Soccer Talk

London (AFP) – Pep Guardiola has praised the way his Manchester City players have dealt with adversity on and off the pitch after they strengthened their grip on the Premier League title race. City, who beat Chelsea 1-0 on Saturday, are 11 points clear of second-placed Liverpool after 12...
PREMIER LEAGUE・1 DAY AGO
CityXtra

The upcoming summer transfer window is expected to be one of significant business for the reigning Premier League champions, as they look to prioritise the signing of a new centre-forward to replace the recently departed and retired Sergio Aguero. However, while a top level striker is expected to be the...
PREMIER LEAGUE・1 DAY AGO

There is a strong case to make for Kevin De Bruyne being the face of Manchester City’s unprecedented dominance under Pep Guardiola. The Belgian has emerged as arguably the best midfielder in the world during his time under the Catalan coach, raising the bar for his counterparts with his spellbinding displays, season upon season.
PREMIER LEAGUE・6 HOURS AGO
CityXtra

A single goal of the highest quality from midfield maestro Kevin De Bruyne was enough to separate the two sides at the weekend, as Manchester City extended the gap between themselves and the London outfit to a staggering 13 points. The Belgium international star scored his fifth Premier League goal...
PREMIER LEAGUE・1 DAY AGO
CityXtra

In Ederson, Premier League champions Manchester City possibly have the most well-rounded goalkeeper in the world at their disposal. The Brazilian international is the embodiment of a modern-day number one and has been synonymous with Pep Guardiola’s reign of roaring success at the club since his arrival from Benfica in 2017.
PREMIER LEAGUE・1 DAY AGO

The west Londoners lost further ground in the race for the Premier League title as Kevin De Bruyne's sumptuous strike after 70 minutes sealed a 12th straight league win for Pep Guardiola's men at the weekend. With Liverpool closing the gap to Manchester City to 11 points (with a game...
PREMIER LEAGUE・1 DAY AGO
CityXtra

Alongside the roaring success of the Manchester City first team in recent years, the club's academy system is thriving just as well. The results differ, with some player sales resulting in healthy paydays for the club, like Jadon Sancho, or some finding their way into the City first-team, like Phil Foden and Cole Palmer.
PREMIER LEAGUE・11 HOURS AGO
SPORTbible

Pep Guardiola Told How Many 'Manager Of The Month' Awards Sir Alex Ferguson Won, He Couldn't Believe It

Pep Guardiola's reaction to finding out Sir Alex Ferguson picked up 27 'Manager of the Month' awards during his 26 year reign at Manchester United is incredible. The 50-year-old Spaniard was named Premier League Manager of the Month for the second successive month in December after Manchester City won all seven of their domestic games to open up an eight-point lead at the top of the table.
PREMIER LEAGUE・2 DAYS AGO
CityXtra

Following Manchester City’s early elimination from the 2021/22 Carabao Cup, the Premier League champions are now set to have a two-week break after facing Southampton in the Premier League this weekend. It was originally reported by the Telegraph’s Mike McGrath that Pep Guardiola had planned a warm-weather training camp...
PREMIER LEAGUE・5 HOURS AGO
CityXtra

In the modern era of Manchester City Football Club, there have been plenty of impressive teams. From Manuel Pellegrini's 2013/14 Premier League title-winning side - who caught top-flight leaders Liverpool in the dying months of the season, to Pep Guardiola's centurions - who made light work of all of their foes that season.
PREMIER LEAGUE・1 DAY AGO
Yardbarker

Pep Guardiola turned 51 today. The Manchester City coach has enjoyed a life full of achievement and will go down as one of the most important people in the history of Barcelona. The Catalan commits to every endeavour he begins with unwavering focus and determination. That’s true for coaching a...
UEFA・1 HOUR AGO
CityXtra

Patrick Roberts’ steep £11 million signing from Fulham to Manchester City was met with several expectations, considering the youngster was one of English football’s most promising talents. However, a host of fruitless loan spells to the likes of Celtic, Girona, Norwich City, Middlesbrough, Derby County and Troyes...
PREMIER LEAGUE・1 DAY AGO
CityXtra

Ruben Dias and Kevin De Bruyne were named as Manchester City’s two representatives in the FIFA FIFPro World XI at a virtual event in Zurich on Monday evening. The pair played a major role in Manchester City’s 2020/21 Premier League title win, fourth successive Carabao Cup victory and spearheading their side to a first-ever Champions League final in the club’s history.
PREMIER LEAGUE・10 HOURS AGO