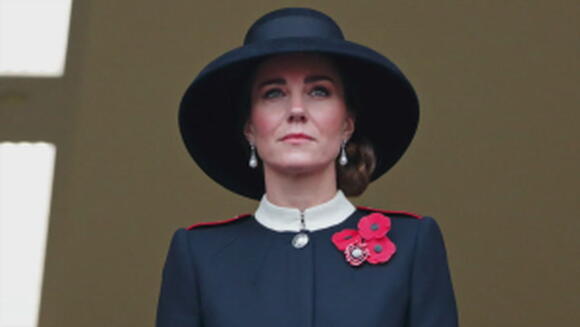 The Duchess of Cambridge joined the Countess of Wessex and the Duchess of Cornwall at the annual Remembrance Sunday service in London this weekend.

Royal family members, politicians , veterans and their families gathered in Whitehall on Sunday, 14 November, to remember the country’s war dead.

Appearing on a balcony of the Foreign and Commonwealth office, Kate wore a structured black Alexandra McQueen coat paired with pearl-drop earrings. 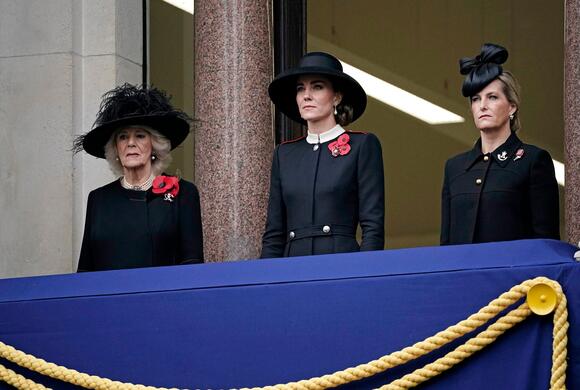 The coat was adorned with several red poppies, and her hair was covered by a black hat.

The women watched from the balcony as Prince Charles laid a wreath at the Cenotaph in memory of Britain’s fallen soldiers.

The event was supposed to mark the Queen ’s first public appearance after doctors advised her to rest following an overnight stay in hospital last month.

Earlier on Sunday, Buckingham Palace announced that the monarch would not be attending because she has sprained her back.

The palace said she had made the decision with “great regret”.

“Her Majesty is disappointed that she will miss the service,” a statement said.

“As in previous years, a wreath will be laid on Her Majesty’s behalf by the Prince of Wales.”

On Thursday, 11 November, Charles reassured members of the public in Brixton , London, that his mother is in good health.

The heir apparent was meeting young people helped by his charity, the Prince’s Trust, at a NatWest branch when one person asked him: “Prince Charles, how is your mother?”

Patting the man on the arm, the royal replied: “She’s all right, thank you.”

The Queen spent a night in hospital in October to undergo “preliminary checks”, Buckingham Palace said at the time.

Following the visit, she has cancelled a number of scheduled appearances such as at Cop26 and a visit to Northern Ireland.

She has still been carrying out some light duties and recently returned to Windsor Castle following a weekend stay at Sandringham.

kate is everything meghan will never be;poised, dignified, polite, and The Future Queen. thats why meghan hates her; she knows she isnt made to be a Royal..

Camilla will never wear the crown EVER. The queens own uncle was kicked off the throne. She's super big on tradition and will never allow those scandalous events to touch the throne. The crown will be passed to William and Kate in 2022.

I like Kate Middleton a lot. She is not charismatic but I just found her very pleasing to look at. She just have that sorts of attraction. Calm and collect all the times.

Kensington Palace isn't what you would describe as a normal 'house' but it's home for Prince William and Kate Middleton along with their three children Prince George, Princess Charlotte and Prince Louis. As well as the size and the grandeur, there's another thing that sets it apart from an ordinary house – and that's the sleeping arrangements. At Apartment 1A inside Kensington Palace it is believed the royals sleep on the ground floor of the property rather than upstairs.
ENTERTAINMENT・6 DAYS AGO
Hello Magazine

Pippa Middleton may have been dressing down on Monday afternoon, but Kate's younger sister still looked as chic as can be, wearing one of her favourite tartan coats by Alexa Chung. Underneath her swish outerwear staple, she rocked a classic all black ensemble, which included a cosy roll neck, and finished off the look with crisp white trainers by Jimmy Choo.
BEAUTY & FASHION・14 DAYS AGO
epicstream.com

Prince William will reportedly take after Queen Elizabeth, not Prince Charles when he becomes king. Prince William and Prince Charles are the future kings of the British monarchy. But the father and son couldn’t be more different from one another. While speaking with Express UK, relationship expert Neil Wilkie...
CELEBRITIES・4 DAYS AGO
Business Times

Fans and supporters have continued to shower their praise and adoration for Prince William and Kate Middleton. But, despite the generally positive reception toward the couple, they, also, have their fair share of scrutiny and controversy.
CELEBRITIES・10 DAYS AGO

Is Queen Elizabeth moving in with Prince William and Kate Middleton? One tabloid claims a recent security breach has the royal family reeling. Here’s what we know about Her Majesty’s new living arrangements.
CELEBRITIES・13 DAYS AGO
Entertainment Times

Prince Andrew is reportedly plotting an act of revenge against Prince Charles. Prince Andrew has been the talk of the town since the news about his alleged involvement in the infamous Jeffrey Epstein scandal broke. Since then, the former husband of Sarah Ferguson has been keeping a low profile, even missing some important royal events just to avoid another set of controversies.
CELEBRITIES・3 DAYS AGO
Insider

One article by The Sun newspaper, which was supposed to be about Kate Middleton, featured Meghan Markle's name 25 times.
CELEBRITIES・14 DAYS AGO

Kate Middleton marked a life milestone earlier this year. She celebrated her 40th birthday and had a low-key engagement on January 9. Three official portraits of her surfaced ahead of the day, and a source told Us Weekly that they all "delighted" her. She reportedly spent weeks preparing for the material, making the outcome more "thrilling" for her.
CELEBRITIES・8 DAYS AGO
Elle

Kate Middleton’s New Royal Title Will Be ‘Bittersweet’ For Prince William, Here's Why

As we all know, a lot of things will change when Prince Charles becomes King. But, he won't be the only member of the Royal Family who has to get their head around a new Monarchy, as his ascension to the throne will also impact the likes of Prince William and Kate Middleton.
CELEBRITIES・6 DAYS AGO
Business Times

There's no denying that the Royal Family has quite the property portfolio – which includes their more well-known homes like Buckingham Palace, Windsor Castle and Kensington Palace, to the lesser-known (but no less fabulous) Tamarisk House and Bagshot Park. But, one home that has seemed to slip under the radar altogether is Fort Belvedere, also known as 'The Fort', which can be found on the Queen's Windsor Estate.
CELEBRITIES・6 DAYS AGO

Kate Middleton spent her teenage years in a £1.5million property named Oak Acre in Bucklebury village, but her parents Carole and Michael Middleton moved a short distance away following the Duchess of Cambridge's wedding to Prince William. The Middletons moved into the large, detached house when Kate was aged...
CELEBRITIES・8 DAYS AGO
Cosmopolitan

If the royal experts are right, Prince William and Kate Middleton are going to modernize the monarchy big time when he takes the throne. The truth is, the Duke and Duchess of Cambridge have been dragging the royal family into the 21st century for years now. One example of their tradition-toppling ways that's a bit vintage but currently getting fresh life in the royal news cycle dates back to their engagement interview in 2010.
CELEBRITIES・9 DAYS AGO
Hello Magazine

There's no denying that the Duchess of Cambridge has a lovely relationship with her royal in-laws, particularly Prince William's cousin, Zara Tindall. Since Kate began dating the Prince during their university years, she and Zara appear to have developed a close bond and have been pictured chatting and laughing on several occasions.
CELEBRITIES・11 DAYS AGO
SheKnows

If you purchase an independently reviewed product or service through a link on our website, SheKnows may receive an affiliate commission. Kate Middleton kicked off 2022 by putting her best (fashion) foot forward. The Duchess of Cambridge attended her first public engagement along with her husband, Prince William, following the holidays and her milestone 40th birthday. As the Cambridges pulled up to the site of their visit, Kate’s look totally caught our eye. Obviously, this is nothing new for Kate, who always seems to perfectly accessorize every outfit she fashions with a classic silhouette and contemporary edge. So, without further ado, let’s dive into the Duchess of Cambridge’s first look of 2022.
BEAUTY & FASHION・6 DAYS AGO
Hello Magazine

If you haven't shopped the Nordstrom sale, with clearance prices up to 60% off and more, then get shopping, stat! There are hundreds amazing bargains waiting for you, from kids clothing to homeware. But guess what? There are some especially good bargains for fashion fans of Kate Middleton's style. Shop...
DESIGNERS & COLLECTIONS・13 DAYS AGO
KTVB

Kate Middleton Did Not Hear Bells on Her Birthday, Here's Why

Kate Middleton did not hear bells from Westminster Abbey on her birthday. Buzz60's Keri Lumm reports.
CELEBRITIES・14 DAYS AGO