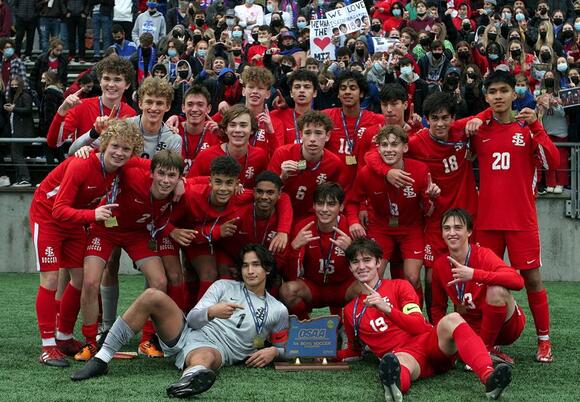 The Falcons speed past Corvallis 5-0 in the title game at Hillsboro Stadium on Saturday.

An unforgettable season for the La Salle boys soccer team ended with a Class 5A state championship Saturday, Nov. 13, as the Falcons earned a 5-0 victory over Corvallis at Hillsboro Stadium.

La Salle grabbed a 2-0 lead in the first half off two penalty kick goals by senior Mizael Harris, then added a third PK by Harris and a pair of scores from sophomore Kevin Serrano-Maldonado for the final 5-0 margin.

Come back to see full coverage of the game at clackamasreview.com.

A Georgia prosecutor investigating possible 2020 election interference by former President Donald Trump and others has been granted a special grand jury to proceed with the probe. The grand jury requested by Fulton County District Attorney Fani Willis will have the power to subpoena witnesses in an investigation that focuses...
GEORGIA STATE・13 HOURS AGO
The Associated Press

Former Alaska Governor Sarah Palin's positive tests for the coronavirus have forced the postponement of a civil trial over her defamation claims against The New York Times. U.S. District Judge Jed Rakoff said the trial, which was to begin Monday, can start February 3 if Palin has adequately recovered by then.
ALASKA STATE・17 HOURS AGO
The Associated Press

CAMBRIDGE, Mass. (AP) — The Supreme Court has agreed to review a challenge to the consideration of race in college admission decisions, often known as affirmative action. With three new conservative justices on the court since its last review, the practice may be facing its greatest threat yet. The...
CONGRESS & COURTS・6 HOURS AGO

President Biden appeared to be caught on a hot mic on Monday, calling a Fox News correspondent a "stupid son of a bitch" after the journalist asked a question about inflation. It's unclear whether the president knew his mic was still on, but the moment was also caught on camera.
PRESIDENTIAL ELECTION・11 HOURS AGO
NBC News

The Biden administration is scrambling to put pressure on Russia amid rising fears of a possible Russian military incursion in Ukraine. The State Department has ordered the evacuation of family members of U.S. government employees in Ukraine and the Pentagon is readying up to 8,500 troops to potentially deploy to eastern Europe.
POLITICS・12 HOURS AGO

NASA's James Webb Space Telescope slipped into orbit around a point in space nearly a million miles from Earth on Monday. It's on a mission to capture light from the first stars and galaxies to form in the aftermath of the Big Bang. CBS News' Lana Zak has details.
ASTRONOMY・8 HOURS AGO
The Associated Press

Where is Peng Shuai? T-shirts will be OK at Australian Open

MELBOURNE, Australia (AP) — Restrictions which resulted in the removal of a spectator for wearing a T-shirt supporting Chinese tennis player Peng Shuai at the Australian Open have been overhauled after international backlash. With reports of activists planning to distribute hundreds of shirts branded with the question “Where is...
TENNIS・6 HOURS AGO