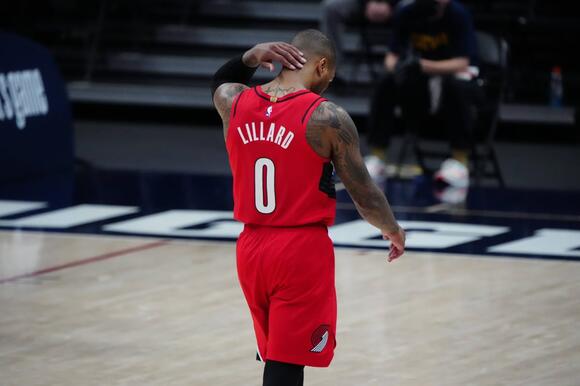 Damian Lillard and the Portland Trail Blazers defeated the Houston Rockets in Texas 104-92 on Friday evening.

The win advanced the Trail Blazers to 6-7 on the season, while the Rockets fell to 1-11.

Lillard had 20 points, six rebounds and seven assists in the win over the Rockets.

However, he has struggled to shoot the basketball at the percentage that he is accustom too.

He's obviously a much better shooter than he's been to start the 2021-22 season, and there is probably nothing to be worried about for the long-term.

NBA veteran Chandler Parsons has announced his retirement from the NBA in an Instagram post on Tuesday. Parsons has played for the Houston Rockets, Dallas Mavericks, Memphis Grizzlies and Atlanta Hawks.
NBA・10 HOURS AGO
Sportsnaut

Bookmark. Save. Favorite. Do your thing. This is the one-stop-shop for everything NBA schedule-related heading into the 2021-22 season: Get
NBA・19 HOURS AGO
All Hawks

Analysis and bets for Tuesday's games featuring the Timberwolves visiting the Knicks and the Warriors welcoming the Pistons.
NBA・14 HOURS AGO

Kemba Walker is questionable for Monday's game between the Charlotte Hornets and New York Knicks.
NBA・2 DAYS AGO
Sportsnaut

Knicks Starting Lineup Against The Hornets

The New York Knicks have announced their starting lineup for Monday's game against the Charlotte Hornets.
NBA・1 DAY AGO
fadeawayworld.net

When it comes to basketball, Ben Simmons has been dealing with a surplus of issues, most of which are directly related to his messy breakup with the Philadelphia 76ers. After months of trade demands, the team has tried to make him return, and Simmons has sacrificed millions to ensure that doesn't happen.
CELEBRITIES・17 DAYS AGO

Bookmark. Save. Do your thing. We will be providing constant updates on this page as it relates to the biggest
NBA・11 HOURS AGO
Yardbarker

The Brooklyn Nets have barely had their “Big Three” on the floor together since they assembled what they thought would be a championship roster, and one of their superstar players is reportedly open to the idea of moving on. NBA reporter Marc Stein wrote on Monday that sources...
NBA・1 DAY AGO
FastBreak on FanNation

James Harden of the Brooklyn Nets sent out a tweet on Sunday.
NBA・1 DAY AGO

Trae Young and the Atlanta Hawks started this season by absolutely dominating Luka Doncic and his Dallas Mavericks in the first game. Things were looking great for the 2021 Eastern Conference finalists and it looked like they would have another successful season. However, things fizzled out and they went 3-5 in their next 8 games after the win.
NBA・2 DAYS AGO
fadeawayworld.net

LeBron James Shows His Love For Savannah James On Her Instagram Video: "When You Walked Downstairs I Said To Myself "Goddamn! That's Mine! Simply Beautiful Queen!"

LeBron James married his high-school girlfriend Savannah James and their relationship as well as their family is something that fans of the NBA admire greatly. The couple are known for supporting each other through the trials and tribulations that come with LeBron being one of the most popular players in the history of the game and someone that is constantly in the public eye.
NBA・1 DAY AGO
fadeawayworld.net

The Eastern Conference is full of amazing teams and the Miami Heat is certainly one of them. But the biggest difference between the Heat and the other teams in the league is their ability to comb through hidden gems. One of their last founding is the undrafted rookie center Omer Yurtseven.
NBA・1 DAY AGO
FastBreak on FanNation

James Harden and the Brooklyn Nets lost to the Cleveland Cavaliers in Ohio on Monday afternoon.
NBA・1 DAY AGO

LeBron James and Magic Johnson engaged in a bit of an indirect back-and-forth on Twitter over the weekend. Following the Los Angeles Lakers blowout loss to the Denver Nuggets on Saturday, the Hall of Fame point guard sent out a critical tweet calling out the Lakers’ effort. Less than...
NBA・19 HOURS AGO
fadeawayworld.net

The Los Angeles Lakers have received plenty of criticism this campaign, given their inability to win games consistently. Instead, they have struggled to find their touch, and even though they have entered winning streaks, it's been because of individual performances rather than a collective effort. LeBron James and Anthony Davis...
NBA・14 HOURS AGO
FastBreak on FanNation

The Brooklyn Nets lost to the Cleveland Cavaliers on Monday afternoon in Ohio.
NBA・1 DAY AGO
FastBreak on FanNation

The Nets Have Given A Kevin Durant Injury Update

Kevin Durant injured his knee in Saturday's game between the New Orleans Pelicans and Brooklyn Nets. On Sunday, after Durant got an MRI, the Nets gave an update on their All-Star forward.
NBA・2 DAYS AGO