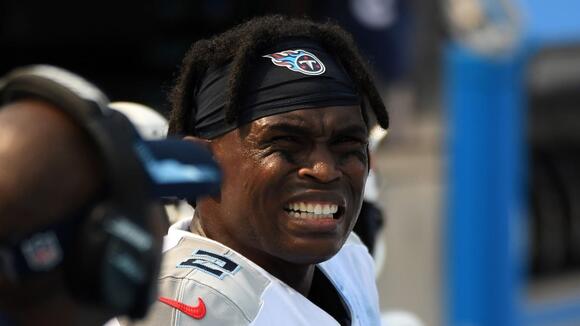 Former Atlanta Falcons receiver Julio Jones has another setback with the Tennessee Titans as one of the worst seasons of his career continues.

Jones will miss at least the next three games and possibly more depending on how he recovers. Jones has already missed three of the Titans first nine games and has just 21 catches for 336 yards and has yet to find the end zone for the Titans.

Jones, a seven-time Pro Bowl selection with the Falcons, pushed for a move away from Atlanta after last season. The Falcons made the trade to the Titans in the spring.

The Falcons received a second and fourth-round draft pick in exchange for Jones and a sixth-round pick of their own.

After an injury plagued 2020 season, Atlanta needed to get some relief from Jones' contract and some draft capital in return. Jones wanted to play for a contender. Jones got his wish as the Titans are 7-2 and lead the NFC South, but the season hasn't gone as he had hoped so far.

The Falcons have had their own problems at receiver this year. Calvin Ridley had been relatively ineffective before leaving the Falcons for personal reasons. He has just 31 catches for 281 yards and two touchdowns after a breakout 2020 campaign that saw him total 90 catches for 1,374 yards and nine touchdowns.

Russell Gage was Atlanta's second leading receiver in 2020 with 72 catches for 786 yards and four touchdowns. The 25-year old receiver has started just twice this season because of injuries and has just 16 catches for 159 yards .

With the Falcons three leading receivers from 2020 either being gone, ineffective, or both, it's left the door open for new playmakers for quarterback Matt Ryan including rookie tight end Kyle Pitts and slash-running back Cordarrelle Patterson.

Pitts has 546 yards in his first eight games as a pro, and Patterson needs just 11 yards against the Cowboys on Sunday to set a career high with 470.

Seeing Jones go was unpleasant for many Falcons fans, but after two injury-plagued seasons for the 32-year old Jones, it seems general manager Terry Fontenot not only made the right choice, but got a pretty good deal as well.

NFL picks against the spread. NFL Divisional Playoffs edition. Oh boy, this two-day slate is going to be an absolute
NFL・2 DAYS AGO
Sportsnaut

Cincinnati Bengals coach Zac Taylor was on the Texas A&M and Miami Dolphins staffs when Tennessee Titans quarterback Ryan Tannehill was there.
NFL・23 HOURS AGO

The notion of the Falcons protecting Matt Ryan should be at the forefront this offseason.
NFL・2 DAYS AGO
Falcon Report

Cordarrelle Patterson is a free agent, and Mike Davis might not be back. Here's a look at five running backs the Atlanta Falcons could target in free agency.
NFL・2 DAYS AGO
Falcon Report

Watch all the highlights of Kyle Pitts’ historic rookie season with the Atlanta Falcons.
NFL・1 DAY AGO
USA TODAY

Last season's 31-20 defeat to the Cincinnati Bengals was the low point for a Tennessee Titans defense that has improved greatly in 2021.
NFL・13 HOURS AGO

Could either Bulldog stay home and become a Falcon next season?
NFL・1 DAY AGO
Sports Illustrated

Discover player props odds, plays, and insights for Nick Westbrook-Ikhine in his NFL Playoffs contest with the Tennessee Titans against the Cincinnati Bengals.
NFL・5 HOURS AGO
Falcon Report

The Falcons must make a decision on their backup tight end.
NFL・5 HOURS AGO
Falcon Report

Who could the Atlanta Falcons add through free agency to upgrade right tackle?
NFL・6 HOURS AGO

The Tennessee Titans have chosen the four players they will protect this week ahead of the divisional-round matchup against the Cincinnati Bengals. The four players are defensive lineman Da’Shawn Hand, quarterback Kevin Hogan, center Daniel Munyer and running back Jordan Wilkins. While the Titans have had to dip into...
NFL・9 HOURS AGO
Falcon Report

'I would not be surprised at all to see WR Calvin Ridley dealt to the New England Patriots this offseason,' says NFL insider
NFL・6 HOURS AGO
BamaCentral

The most excited person in football this week could be Tennessee Titans quarterback Ryan Tannehill. When his team hosts the Cincinnati Bengals on Saturday for a chance to play in the AFC Championship game, the Titans could have their big three back of A.J. Brown and former Alabama stars Derrick Henry and Julio Jones.
NFL・7 HOURS AGO
USA TODAY Sports Media Group

The Tennessee Titans will open up the playoffs in the AFC Divisional Round against the Cincinnati Bengals. We have some brand new tees and hoodies that can help you represent your favorite team while we make our run to the Super Bowl in Los Angeles. You can check out the...
NFL・4 HOURS AGO
Sports Illustrated

Discover player props odds, plays, and insights for Ryan Tannehill in his NFL Playoffs contest with the Tennessee Titans against the Cincinnati Bengals.
NFL・5 HOURS AGO
Sports Illustrated

Henry returned to practice in pads on Tuesday.
NFL・5 HOURS AGO
ClutchPoints

The Kansas City Chiefs officially booked their ticket to a rematch with Josh Allen and the Buffalo Bills in the Divisional Round after blowing out the Pittsburgh Steelers on Sunday. As we all know, Patrick Mahomes and Co. beat the Bills 38-24 last season in the AFC title game and...
NFL・2 DAYS AGO
The Spun

Tony Romo didn’t like how Cowboys quarterback Dak Prescott handled the end of the game on Sunday. After Prescott slid at the 25-yard line, he hurried up to the line with the center but didn’t find the ref so he could properly spot the ball. Romo confirmed during...
NFL・2 DAYS AGO