Here's What Donovan Mitchell Tweeted Before The Jazz Played The Heat 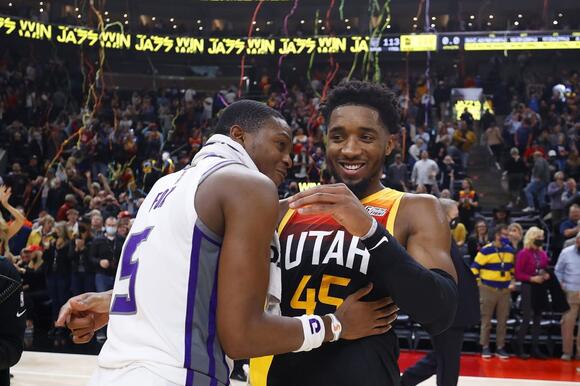 Donovan Mitchell sent out a tweet before the Jazz hosted the Heat on Saturday afternoon in Utah.

The Utah Jazz are hosting the Miami Heat on Saturday afternoon in Salt Lake City, and before the game started, All-Star Donovan Mitchell sent out a tweet.

The Jazz entered the game with an 8-5 record, and lost their last game at home to the Indiana Pacers.

As for the Heat, they come into the game with a 7-5 record, but have lost their last three games to the Denver Nuggets, Los Angeles Lakers and Los Angeles Clippers.

Both the Heat and the Jazz squared off earlier in November when the Heat beat the Jazz 118-115 in Miami, Florida.

Both teams were 7-2 prior to their matchup in Miami, and they have both had a rough stretch over their last few games.

More on the Miami Heat can be read here.

Donovan Mitchell Slams Rumors About Joining The Heat: "Y’all Like To Talk A Lot When We Lose..."

Small market teams are always at a severe disadvantage when it comes to keeping their stars. Guys like Damian Lillard, Giannis Antetokounmpo, and Bradley Beal are constantly being connected to higher-market teams and can seemingly never avoid talks about them jumping ship. Recently, even Donovan Mitchell has experienced that reality,...
NBA・2 DAYS AGO
Sportsnaut

Bookmark. Save. Favorite. Do your thing. This is the one-stop-shop for everything NBA schedule-related heading into the 2021-22 season: Get
NBA・6 HOURS AGO
FastBreak on FanNation

The New York Knicks are facing off with the Atlanta Hawks in Georgia on Saturday night.
NBA・2 DAYS AGO
ksl.com

SALT LAKE CITY — Rudy Gobert's pointed remarks didn't go unnoticed. On Friday, Gobert, who had just returned from health and safety protocols, made some comments that raised some eyebrows among the Jazz fan base — and within his own team. Gobert said the Jazz didn't have the...
NBA・2 DAYS AGO

Russell Westbrook gets nasty early and Stanley Johnson delivers late as the Lakers earn a 101-95 win over the Utah Jazz on Monday at Crypto.com Arena.
NBA・13 HOURS AGO
Sportsnaut

Kemba Walker is questionable for Monday's game between the Charlotte Hornets and New York Knicks.
NBA・1 DAY AGO
FastBreak on FanNation

Rudy Gobert is available for Sunday's game between the Utah Jazz and Denver Nuggets in Colorado.
NBA・2 DAYS AGO
kslsports.com

SALT LAKE CITY – Jazz guard Donovan Mitchell swatted a shot attempt by LeBron James during Utah’s game against the Los Angeles Lakers. The Lakers hosted the Jazz at Crypto.com Arena on Monday, January 17. With 10:39 left in the opening quarter, James drove to the hoop for...
NBA・15 HOURS AGO
Sportsnaut

Jimmy Butler had a triple-double, and Bam Adebayo returned after missing 22 games, leading the host Miami Heat to a
NBA・16 HOURS AGO

Jazz's Injury Report Against The Nuggets

The Utah Jazz are in Denver to take on the Nuggets on Sunday.
NBA・1 DAY AGO
FanSided

The Miami Heat have long moved on from the era of Dwyane Wade, the greatest player in the franchise’s history. That’s for certain, both of those facts. Their team is now centered around Jimmy Butler and Bam Adebayo. In the past few seasons, the duo has helped lead the Heat to success, including an NBA Finals appearance.
NBA・7 HOURS AGO
Sports Illustrated

Analysis and bets for Tuesday's games featuring the Timberwolves visiting the Knicks and the Warriors welcoming the Pistons.
NBA・2 HOURS AGO
Heat Nation

The Miami Heat have dealt with a number of injury and COVID-19 issues to key players this season, but they’ve largely found a way to keep winning despite those obstacles. Jimmy Butler is one player who has been sidelined at various points this season. The five-time All-Star has appeared in just 26 of Miami’s 44 games so far.
NBA・3 HOURS AGO

It’s no secret that Russell Westbrook has not been the perfect fit for the Los Angeles Lakers since that blockbuster trade last summer. The former league MVP has still been stuffing the stat sheet — as he has been throughout his decorated career — but somehow, he just hasn’t found his groove playing alongside the likes of LeBron James and Anthony Davis in Hollywood.
NBA・2 DAYS AGO
Yardbarker

The Brooklyn Nets have barely had their “Big Three” on the floor together since they assembled what they thought would be a championship roster, and one of their superstar players is reportedly open to the idea of moving on. NBA reporter Marc Stein wrote on Monday that sources...
NBA・19 HOURS AGO
FastBreak on FanNation

James Harden of the Brooklyn Nets sent out a tweet on Sunday.
NBA・1 DAY AGO
FastBreak on FanNation

The Brooklyn Nets lost to the Cleveland Cavaliers on Monday afternoon in Ohio.
NBA・21 HOURS AGO