What do teams do when James Harden and Kevin Durant are in a groove? 'Pray' 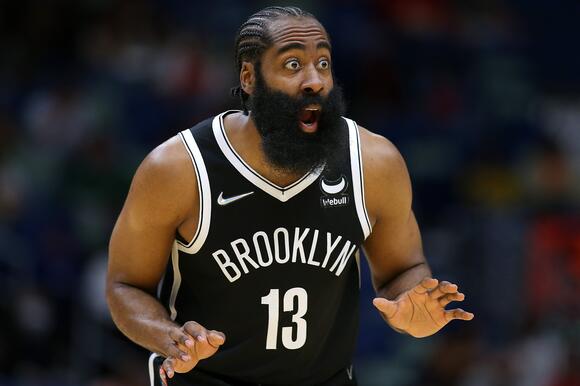 James Harden and Kevin Durant combined to drop 67 points on the Pelicans in Friday night’s win, as Harden continues his rise back to superstar level on the offensive end.

So, with Harden looking closer to his usual self, while Durant has been putting up historic numbers himself, what can opposing defenses do to slow them down?

Harden followed by saying he was joking, but there really isn’t much that can be done. Harden poured in 39 points on Friday, while Durant chipped in 28, his 13 th straight game to open the season with at least 20 points, the only player in franchise history to accomplish that. Durant currently leads the NBA in scoring, while Harden is now shooting 52 percent from the field and 42 percent from deep over his last four games. Durant’s numbers over his last four games are even more ludicrous, and there doesn’t seem to be much hope to stop Brooklyn’s offense when they’re both humming, as it also opens up the floor for the Nets’ other shooters.

“It’s always good for our team when we’re aggressive like that, because we can create so much getting into the paint,” Durant said. “But to be honest, Joe Harris started us off…he set the tone with his scoring, and we just fed off of him.”

Of course, Harden and Durant are the true catalysts, and both are looking like their peak selves in recent games, which spells doom for opposing teams tasked with trying to slow them down.

Perhaps a prayer really is the only course of action.

The NBA announced Friday morning that Kevin Durant has been fined $15,000 for using profane language during a media interview after a loss to Portland.
NBA・2 DAYS AGO
Lakers Daily

Detroit Pistons legend Isiah Thomas recently speculated about what it would be like if star players from today’s NBA were inserted into the league in the 1980s and 1990s. Thomas explained that players like Los Angeles Lakers superstar LeBron James and Brooklyn Nets superstar Kevin Durant would pose massive issues for anyone hoping to stop them in that era.
NBA・1 DAY AGO
The Spun

Kevin Durant Receives Punishment For What He Said This Week

Earlier this week, Brooklyn Nets star Kevin Durant played 42 minutes against the Portland Trail Blazers. After the game, he was asked about his heavy workload. Durant wanted to make it clear that he isn’t worried about his workload, but his postgame comment may have crossed the line. “No,...
NBA・2 DAYS AGO
FastBreak on FanNation

Kevin Durant injured his knee during the game between the New Orleans Pelicans and Brooklyn Nets.
NBA・19 HOURS AGO

The Brooklyn Nets had little trouble dusting the New Orleans Pelicans, 120-105. Steve Nash and co. came into the game with two available members of their Big 3 in Kevin Durant and James Harden. Kyrie Irving is healthy, but remains out since he is not vaccinated and cannot play at home. It was a very well-rounded game from the team who shared the ball well and finished with 30 assists.
NBA・21 HOURS AGO
Sportsnaut

Finally, when the Brooklyn Nets were back on track and performing well in the games, a new problem has confronted them. On Saturday night, the Nets faced the Pelicans and the result was in the favor of the Nets but Kevin Durant’s knee injury in between the game has given them a new headache.
NBA・10 HOURS AGO
Audacy

Kevin Durant out with sprained MCL, reportedly could be back in 4-6 weeks

The Brooklyn Nets will be without the league’s top scorer for what appears to be at least four-to-six weeks as Kevin Durant was diagnosed with a sprained MCL.
NBA・8 HOURS AGO

’Tired’ Nets players talk about the team’s demanding schedule and extensive travel after dropping the second half of a back-to-back: ‘It’s been a whirlwind.’
NBA・2 DAYS AGO
Sportsnaut

No timetable for return of Nets’ Kevin Durant (MCL sprain)

The return of Kyrie Irving feels like a shot in the arm for the Brooklyn Nets. The trio of Irving, Kevin Durant, and James Harden is probably the most talented in the NBA and the Nets’ campaign should only get better as the season progresses. While Irving can only...
NBA・2 DAYS AGO
ClutchPoints

Steve Kerr gets brutally honest on Stephen Curry, Warriors getting thrashed vs. Bucks

The Golden State Warriors have played uncharacteristically lackluster basketball in their last five games. Aside from their lone win over the Cleveland Cavaliers fueled by the return of Klay Thompson, the Warriors have been beaten handily by their other four opponents. Head coach Steve Kerr, however, remains unbothered by the...
NBA・2 DAYS AGO

Isiah Thomas is one of the most underrated legends that has ever played the game. There's no question that he is extremely overlooked for someone that managed to win two championships and was the face of the "Bad Boy" Pistons. Michael Jordan and Isiah Thomas notably had a rivalry, but...
NBA・1 DAY AGO
FastBreak on FanNation

The Golden State Warriors crushed the Chicago Bull in Illinois on Friday night, and after the game DeMar DeRozan spoke to the media.
NBA・1 DAY AGO
FastBreak on FanNation

Giannis Antetokounmpo and the Milwaukee Bucks crushed the Golden State Warriors in Wisconsin on Thursday night.
NBA・2 DAYS AGO
ClutchPoints

Donovan Mitchell is the cornerstone superstar of the Utah Jazz. He’s going to be the centerpiece of this franchise for many years to come, and the fact that the team secured him to a massive extension last year serves as a clear testament to this fact. Be that as...
NBA・2 DAYS AGO
AllClippers

The Golden State Warriors were blown out by the Milwaukee Bucks on Thursday night, in a game that many anticipate will be an NBA Finals preview. While this particular game has no implications on whether or not that will be the case, or how such a series would even go, it was certainly a disappointing showing for a Golden State team that has been struggling.
NBA・2 DAYS AGO
WFAN Sports Radio

Have any Duke teammates, like Zion Williamson, reached out to RJ Barrett since Cam Reddish trade?

Have any former Duke teammates, like Zion Williamson, reached out to RJ Barrett since news of the Cam Reddish trade broke? “We’ll keep that in house.”
NBA・2 DAYS AGO
95.7 The Game