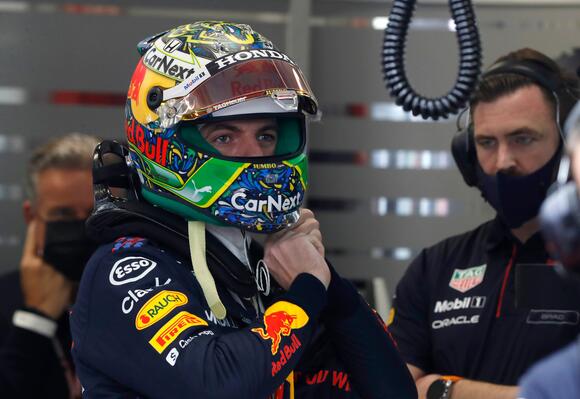 Max Verstappen has received a €50,000 euros (£42,681) fine after touching rival Lewis Hamilton’s car after qualifying at the Brazilian Grand Prix.

Verstappen was called to the stewards’ office at the Interlagos paddock with Formula One’s governing body (FIA) belatedly announcing their conclusion after four hours.

The FIA’s judgement will be delivered before today’s sprint race which starts at 4.30pm (7.30pm UK).

“I think, as we’ve seen with many, many drivers, they sometimes have a look around at what’s going on with the other cars. That’s all it was, a bit of inquisitiveness. Nothing more,” he told Sky Sports television.

“We’ve had drivers pull our clutch paddles, we’ve had heads in cockpits, we’ve had front wings tested, tyres pushed, cars rolled around. It’s not something that’s unusual. It’s never been brought up or even discussed previously.

“Obviously Mercedes’ straight-line speed is very impressive. I think he’s maybe just having a look at that. Drivers are very inquisitive animals sometimes, aren’t they? We’ve seen that many, many times.”

In a bid to lower his carbon footprint, Lewis Hamilton has decided to let go of his internal combustion car collection, of which this bespoke Pagani Zonda LH760 is included. As reported last month, Hamilton was able to find a buyer for this car but the price was not disclosed. A report out of Italy reveals that this transaction was in the region of €10 million, which is roughly $11.3 million.
CARS・6 DAYS AGO
The US Sun

WORLD champions Mercedes have announced February 18 as the date for the launch of their car for the upcoming 2022 season. And the team, led by Toto Wolff, will reveal the car that they hope will challenge for the title during the 2022 F1 season again in a month's time - and Lewis Hamilton WILL be there.
MOTORSPORTS・17 HOURS AGO
firstsportz.com

Valtteri Bottas has left the Brackley-based Mercedes team for the 2022 season of Formula1 after spending five successful years with the team. During his tenure at Mercedes Valtteri was able to win five consecutive constructors’ championships alongside Lewis Hamilton. It has been stated in Essentiallysports that according to former...
MOTORSPORTS・2 DAYS AGO
firstsportz.com

Max Verstappen the Formula1 2021 champion has recently tried his hands at the virtual LM24, while his 2021 Formula1 season was a success, the same was not the case when it came to the 24 hour Le Mans virtual. It has been stated in racingnews365 that Max Verstappen is out...
MOTORSPORTS・2 DAYS AGO

Lewis Hamilton’s Formula One future should not be taken for granted, Zak Brown has insisted – with the McLaren boss admitting he would not be surprised if the seven-time world champion sensationally quits.More than a month on from the controversial conclusion to the Abu Dhabi Grand Prix which denied Hamilton a record eighth title, the Mercedes driver is said to be debating whether to return to the grid in 2022.Hamilton has been conspicuous by his absence from social media in the weeks since the debacle in the desert.An FIA inquiry was launched last week, but the governing body’s findings...
MOTORSPORTS・10 HOURS AGO
firstsportz.com

Roman Grosjean the former Hass Formula1 driver has recently given his opinion on the drama of the Abu Dhabi Grand Prix of the 2021 Formula1 season. It has been stated in Essentiallysports that as per Roman Grosjean, Max Verstappen deserved to win the 2021 Formula1 title given what transpired throughout the season.
MOTORSPORTS・23 HOURS AGO
The Independent

The Formula 1 off season rumbles on with the aftermath of Abu Dhabi still an intense topic in F1 circles, not to mention the link between that and Lewis Hamilton’s future. The seven-time world champion appears to be switching off after the bitter ending to the 2021 season as Max Verstappen stole a maiden world title following a thrilling final lap.But there is also much to debate and discuss surrounding both new rules for the upcoming season, as well as uncertainty surrounding who will line up on the grid.Another trend is how Mercedes, Toto Wolff and the FIA mend...
MOTORSPORTS・16 HOURS AGO
The Guardian

The team will officially unveil the W13 in a "special digital launch event" at Silverstone, and say both drivers will conduct virtual media interviews before the new car is put through a shakedown programme at the circuit. That means it should be the first official day as team-mates for Briton's...
MOTORSPORTS・21 HOURS AGO
The Independent

Eoin Morgan believes it is “laughable” that The Hundred is being blamed for England’s Ashes humiliation as he insisted Test cricket “has always been the priority”.A 4-0 defeat in Australia has prompted much soul-searching and England Test captain Joe Root reasoned that anyone coming into the set-up is doing so “in spite of county cricket, not because of county cricket”.First-class cricket in the country has been increasingly pushed out into the margins of the season in recent years while the inaugural edition of the England and Wales Cricket’s 100-ball event in 2021 was held in July and August.While Root has...
SPORTS・1 HOUR AGO
racingnews365.com